Just to offer a palette cleanser (alternate spelling intentional) after the decadence of the previous post, here's a reminder of Whistler's other passion -- white. I first posted the video link over the holidays so it easily could've been overlooked but the clip is fascinating and worth a watch.
Posted by Style Court at 5:36 PM No comments:

Speaking of ruins, Darren Waterston’s installation Filthy Lucre, the focal point of MASS MoCA's Uncertain Beauty, remains on view there for just four more weeks but will be reappear in May at the Freer-Sackler galleries in D.C.  Part homage and part parody, Waterston’s piece -- actually a complete interior -- deals with James McNeill Whistler's infamous 19th-century Peacock Room, which as we've covered in past posts, has been permanently displayed at Freer-Sackler since the 1920s. In the galleries, Waterston's work will be shown as Peacock Room REMIX, and visitors will be able to see the original room and the alternate reality in juxtaposition with one another.


With melting blue-green paint, gilded-but-crumbling architecture, details including 250 hand-painted pots, scattered ceramic shards, and new interpretations of Whistler's own paintings, Waterston acknowledges the opulent beauty of the Victorian dining room, however in his reimagined space things have spiraled out of control. So it's a comment on the tumultuous history of the Peacock Room but it's also about decadence in general. More here. 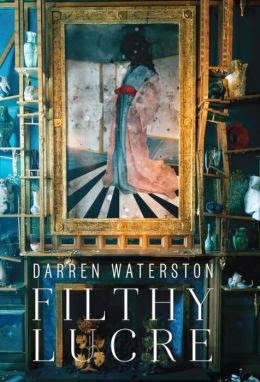 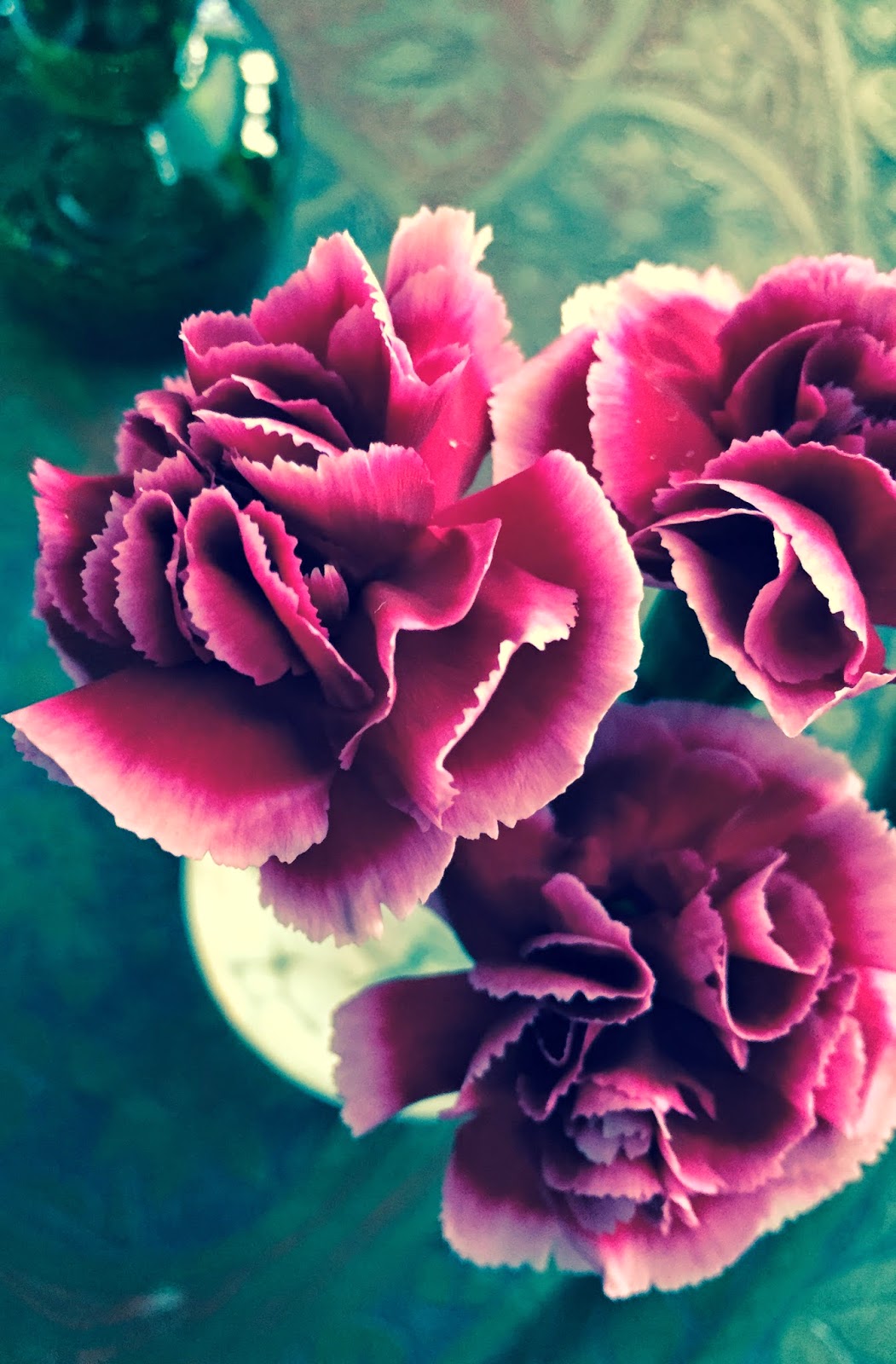 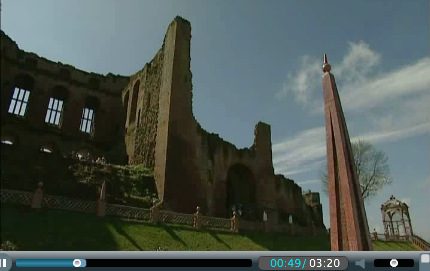 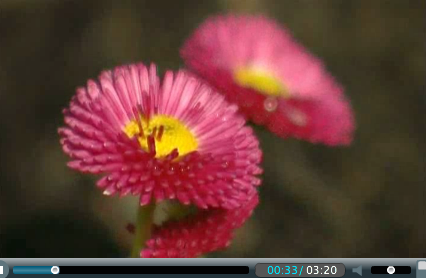 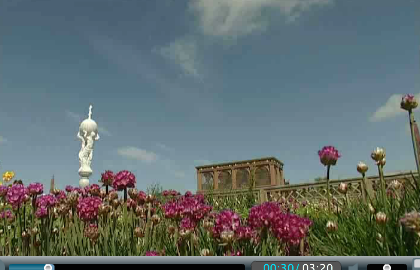 
If you look closely at this late-12th-century indigo-dyed paper, you can make out fine ruled lines. 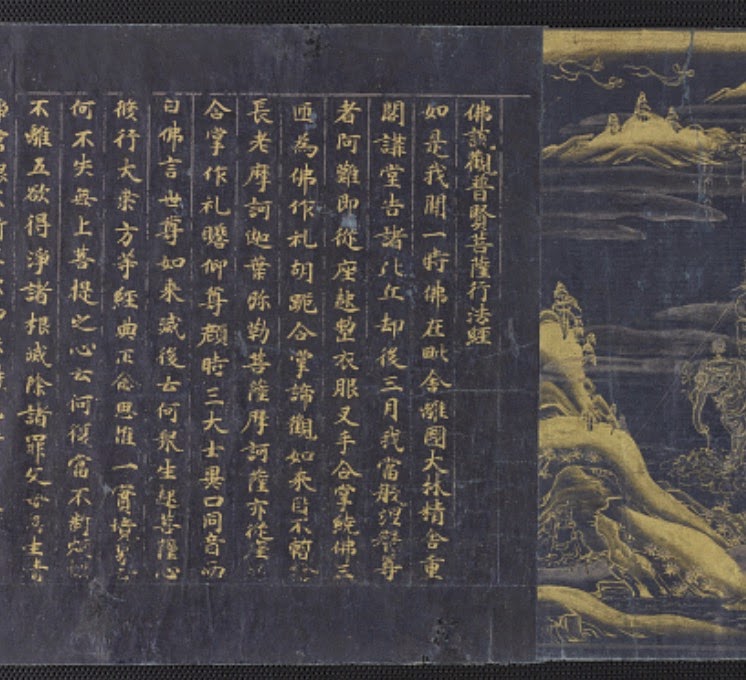 It's a sutra, or Buddhist text, related to the bodhisattva Fugen, but at first glance I was just attracted to the delicate metallic lines on the deepest blue ground and couldn't help imagining how cool it would've been back in elementary school to have silver pencils and spiral notebooks filled with sheets of indigo. 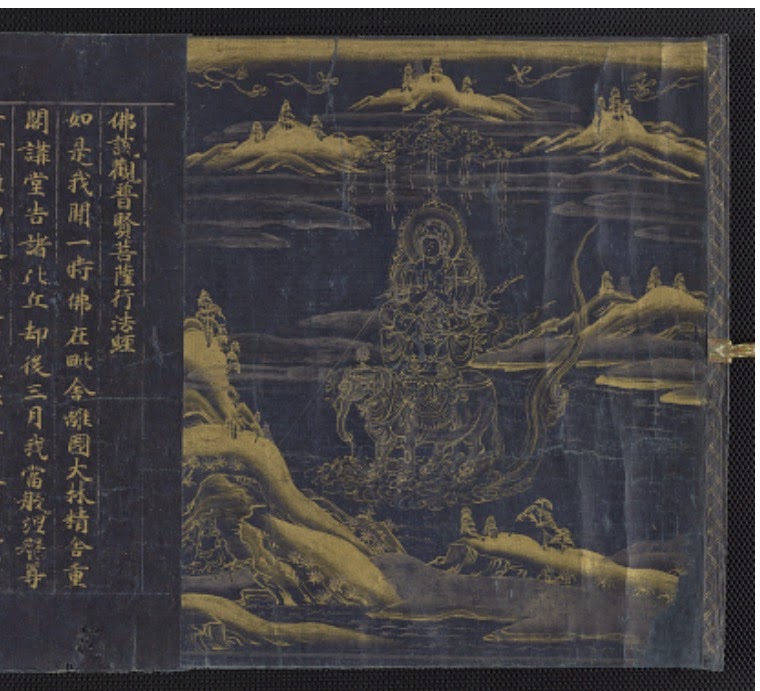 Find more on this Heian period piece, here, along with similar indigo-dyed pages.
Posted by Style Court at 6:28 PM 1 comment:

[Sugar camellias being made in Ron Ben-Isreal's studio. Photo by Mel Barlow.]

Maybe you've noticed that intricately crafted sugar flowers are back (think of Blake Lively's wedding cake and the past two White House holiday seasons, for which the rising culinary star, pastry chef Maggie Austin, created head-turning blooms). But these flowers aren't just back from the 90s. The Tudors' and their entourage enjoyed various forms of sugar work, too. If you're curious about the connection between sugar flowers and Britain's great country houses, or just want to learn more about today's masters of the art form, check out my story in the February issue of flower. 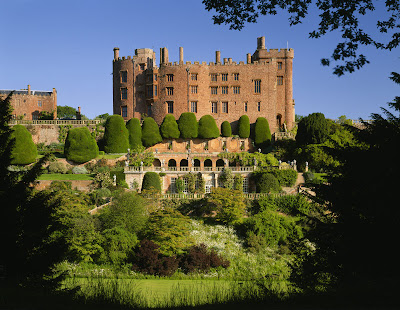 Usually when I'm talking about flowers and Powis Castle in Wales, I'm mentioning the bold red poppies on the 18th-century Indian chintz tent nabbed by Edward Clive, 1st Earl of Powis (it will soon travel to London for the V & A's big fall show) or I'm describing the Clive Album. However, there are loads of fresh flowers to be found at this National Trust property, including varieties kept in massive pots. Get inspired here. And learn more about the gardens in general, here.
Posted by Style Court at 10:52 AM No comments: 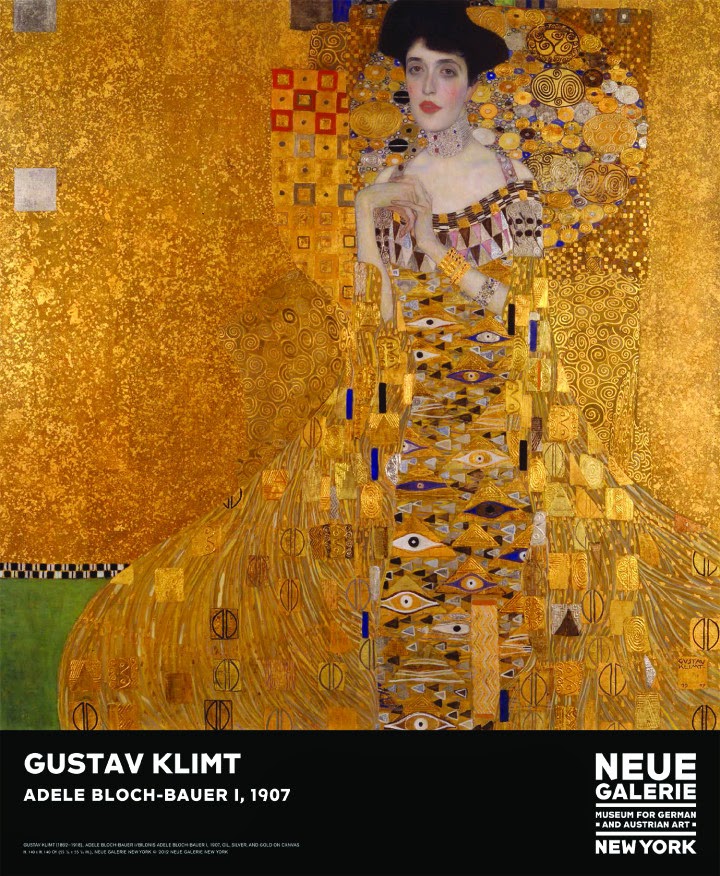 Set to hit theaters in April, Woman in Gold is a multi-layered story of Holocaust refugee Maria Altmann's quest to reclaim Klimt's portraits of her aunt, most famously the first work, Adele Bloch-Bauer I from 1907. The movie deals with Nazi-seized art, and more broadly the Nazis' attempts to erase an entire culture (when taken, the portrait's original title, Adele Bloch-Bauer I, was eerily changed to Dame in Gold, obscuring Adele and her Jewish identity). While the plot centers on Altmann's legal battles, the film will likely generate even more interest in Adele -- as art patron and muse -- as well as in Klimt, his golden period, and early 20th-century Vienna.

But in the meantime, new opportunities to see Klimt's work and other examples of Klimt-era Viennese opulence are available across the U.S.

Gustav Klimt’s "Adam and Eve" opens at the MFA, Boston January 17. On loan from the Belvedere Museum in Vienna, and completed between 1917-18, this is the first piece by Klimt to go on view at the MFA. There will be a related five-week course, A Golden Age in the World of Gustav Klimt, but each session is scheduled during a weekday afternoon.

Klimt’s Adele Bloch-Bauer II, a sort of companion to the better-known portrait now owned by NEUE Galerie, was done in 1912 and is currently on loan to MoMA.

Modern Opulence in Vienna: The Wittgenstein Vitrine remains on view at the Dallas Museum of Art through October 18, 2015. 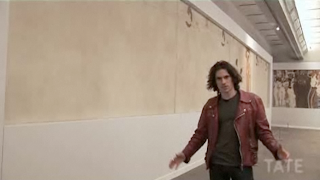 And some links from my past posts:

A 2008 video from Tate Liverpool filmed in conjunction with Gustav Klimt: Painting, Design and Modern Life in Vienna 1900, this installment of TateShots includes decorative arts and paintings.


Erica Tanov takes inspiration from Klimt, here, while curator Gemma Blackshaw talks about another woman in a luminous portrait by Klimt in this podcast.
Posted by Style Court at 8:10 PM 1 comment: 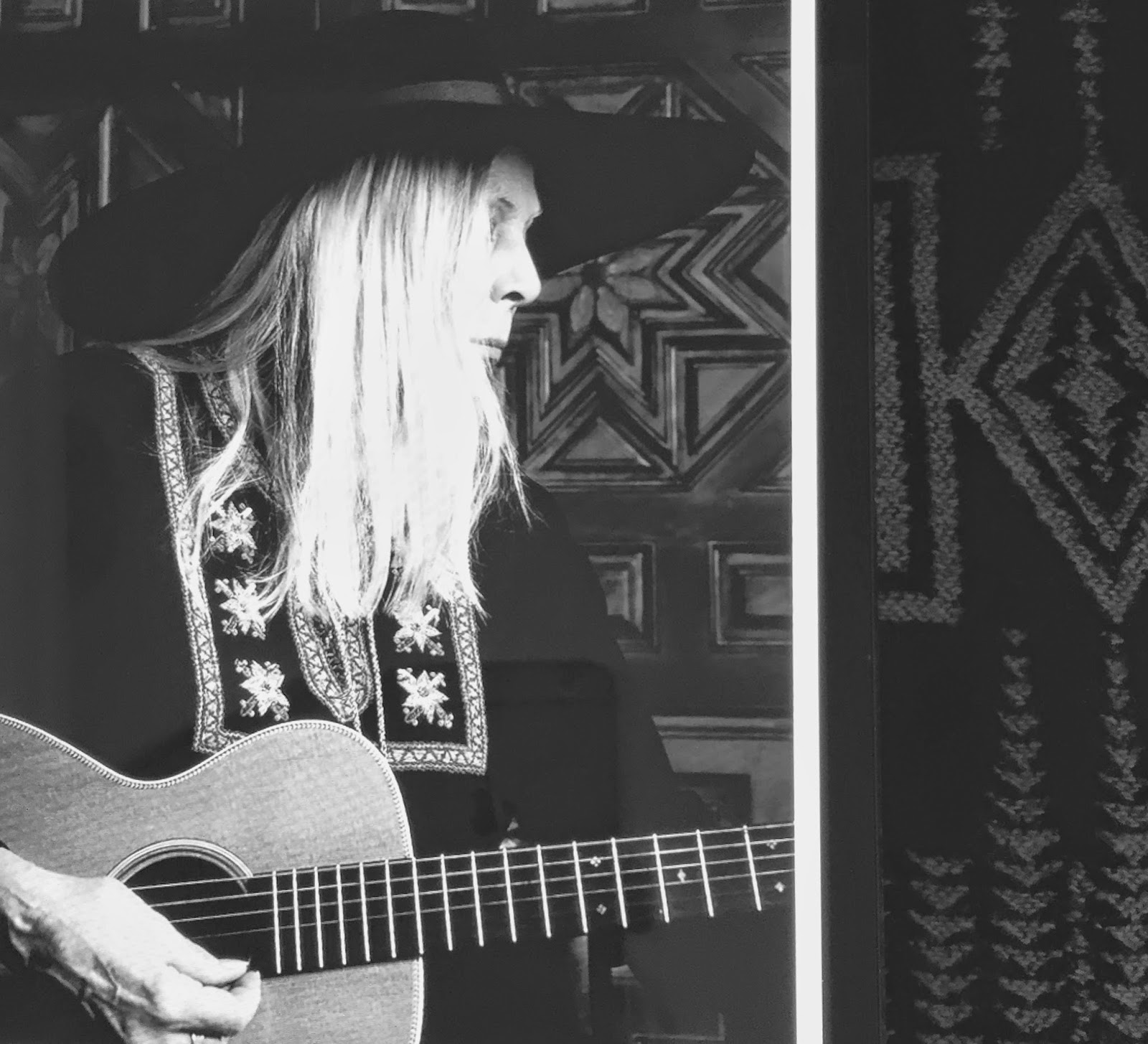 Layers -- visual and maybe metaphorical ones, too -- feature in Saint Laurent designer Hedi Slimane's new ads with Joni Mitchell. Not only has she always created nuanced and multi-dimensional music, but, on the textile front, Mitchell has a long history of mixing interesting patterns. If you're new to this blog, last year Schuyler Samperton fortuitously shared a round-up of Joni-inspired textiles.

And with lace still coming on strong, here's a link to the earlier Love Lace post. While the exhibition left the Powerhouse Museum in 2013, the app lives on.
Posted by Style Court at 1:10 PM 1 comment: 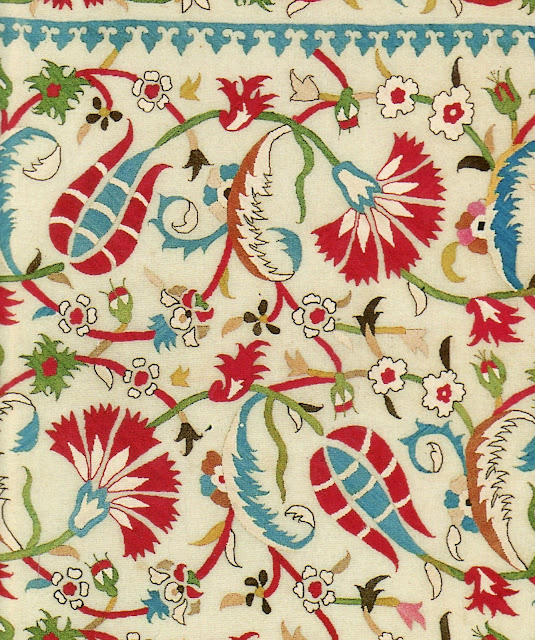 Although this previously posted antique piece, above, is tighter in style and much more boldly colored than Alexina's work (softness is her hallmark), its design with serrated carnations and iconic Ottoman tulips reveals similarities. According to the Textile Museum, which by the way reopens in March, Ottomans had specific tulip standards. Almond shape was de rigueur, and the flowers were often rendered with super-long, sharp, serrated petals. Lale Devri (the Ottoman Empire's Tulip Period) ignited a craze for real tulips -- the rarer the better -- in gardens and indoor rooms, and depictions of tulips for textile designs remained very much in vogue until the flower was usurped by the rose in the late 18th and 19th centuries. For details, the mircosite for Flowers of Silk and Gold: Four Centuries of Ottoman Embroidery is still available but at a new home.
Posted by Style Court at 10:02 AM 3 comments: