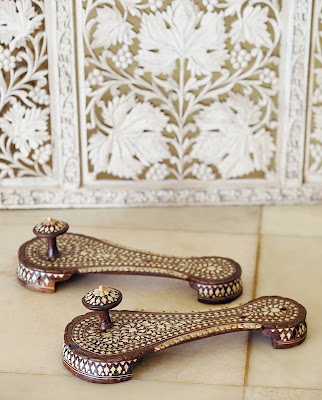 
Visitors, until now prohibited from entering this airy enclave within Duke's Hawaiian residence, Shangri La, with its mother of pearl furniture, red velvet day beds, and lush Indian textiles, may check out her original paint choices -- colors which her foundation says were discovered during microscopic studies of the old walls -- and see how she first furnished the digs immediately after her round-the-world honeymoon.

Since public access to the suite of rooms is a milestone in the property's history, Shangri La has also organized a series of celebratory events showcasing the arts of Mughal India. These will continue through July 2015, but later this month on November 29th, from 5 to 7:30 p.m., filmmaker James Ivory of Merchant Ivory Productions will participate in the series by talking about his own movie making adventures in India. Details here.
Posted by Style Court at 4:27 PM

that ceiling is crazy (crazy good!)