[Click for full-screen view. Unless credited otherwise, all images in this post ©Carter Berg from Never Stop to Think...Do I Have a Place for This? by Mary Randolph Carter,
Rizzoli New York, 2014.]

Children are natural collectors. When photographer Carter Berg was six, he cleaned around a dozen club soda bottles until they glistened like crystal and arranged them on his dresser along with assorted personal treasures including a Pac-Man hat. 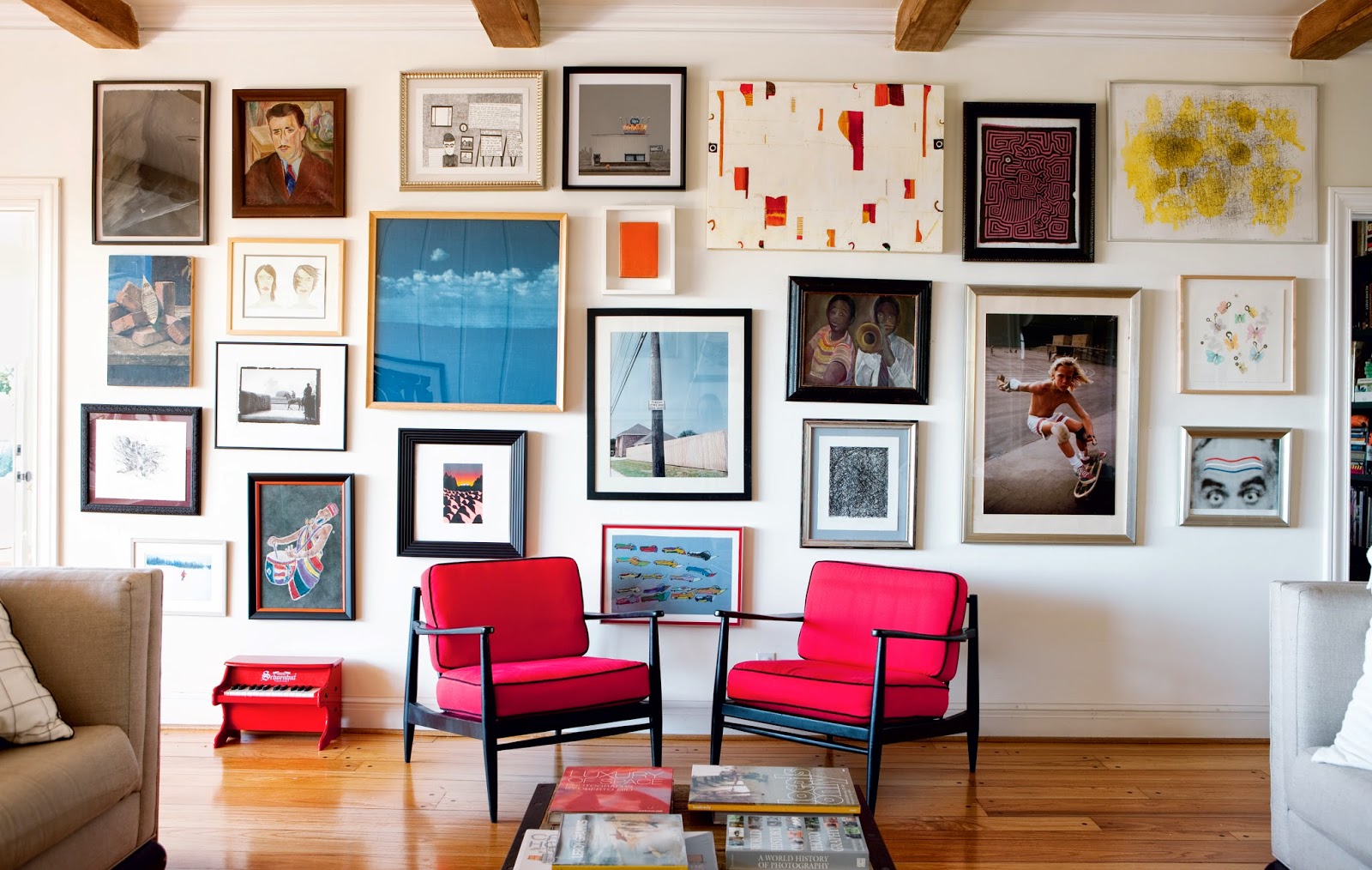 But adults aren't always encouraged to be as free -- to gather and curate just for the joy of it. There's a belief, held by some, that those who love lots of things are just a little less evolved than those who live stuff-free. Pop psychology even tells us that collectors might be filling an emotional void. In her latest book,  Never Stop to Think...Do I Have a Place for This?, writer, photographer, long-time creative director for Ralph Lauren (and Carter Berg's mom), Mary Randolph Carter, shares a different point of view: a counterpoint to the anti-materialist philosophy. 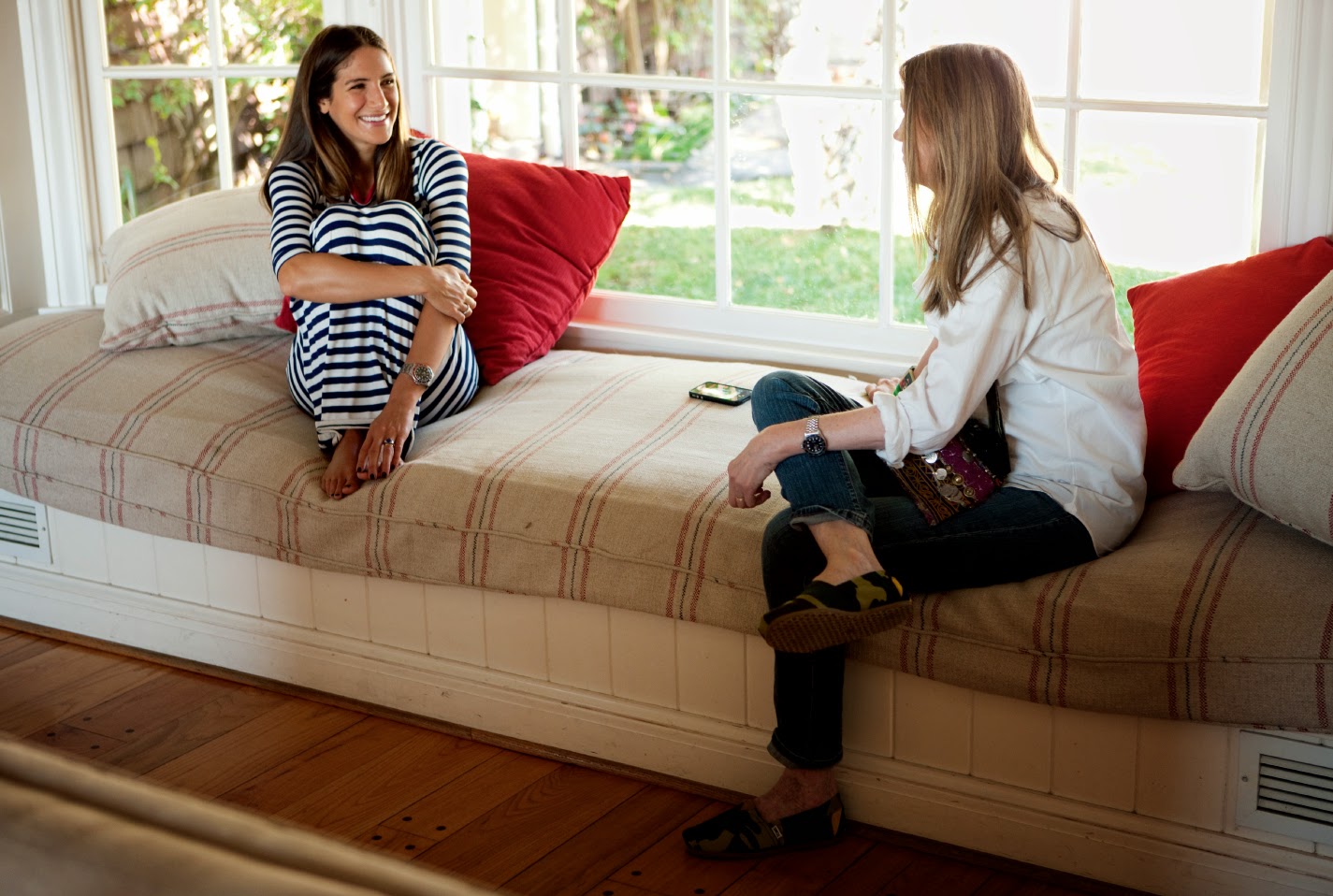 Acknowledging that it's healthy to be rooted in the present, Carter (the author) feels it's also okay to meander from time to time. She writes, "Without the sweetness of our memories of the Past and our dreams of the Future, living in the Now could not be tolerable." Saved objects can connect us to the Past -- maybe just those parts of the Past we choose to remember -- and to our dreams, she maintains.

For her book, Carter sat down with disparate collecting couples and individuals, 19 in all, ranging from the "American Nomad," Doug Bihlmaier, who collects for personal pleasure as well as professionally for Ralph Lauren Corporation, to artist Tom Judd to fashion designer Minnie Mortimer. 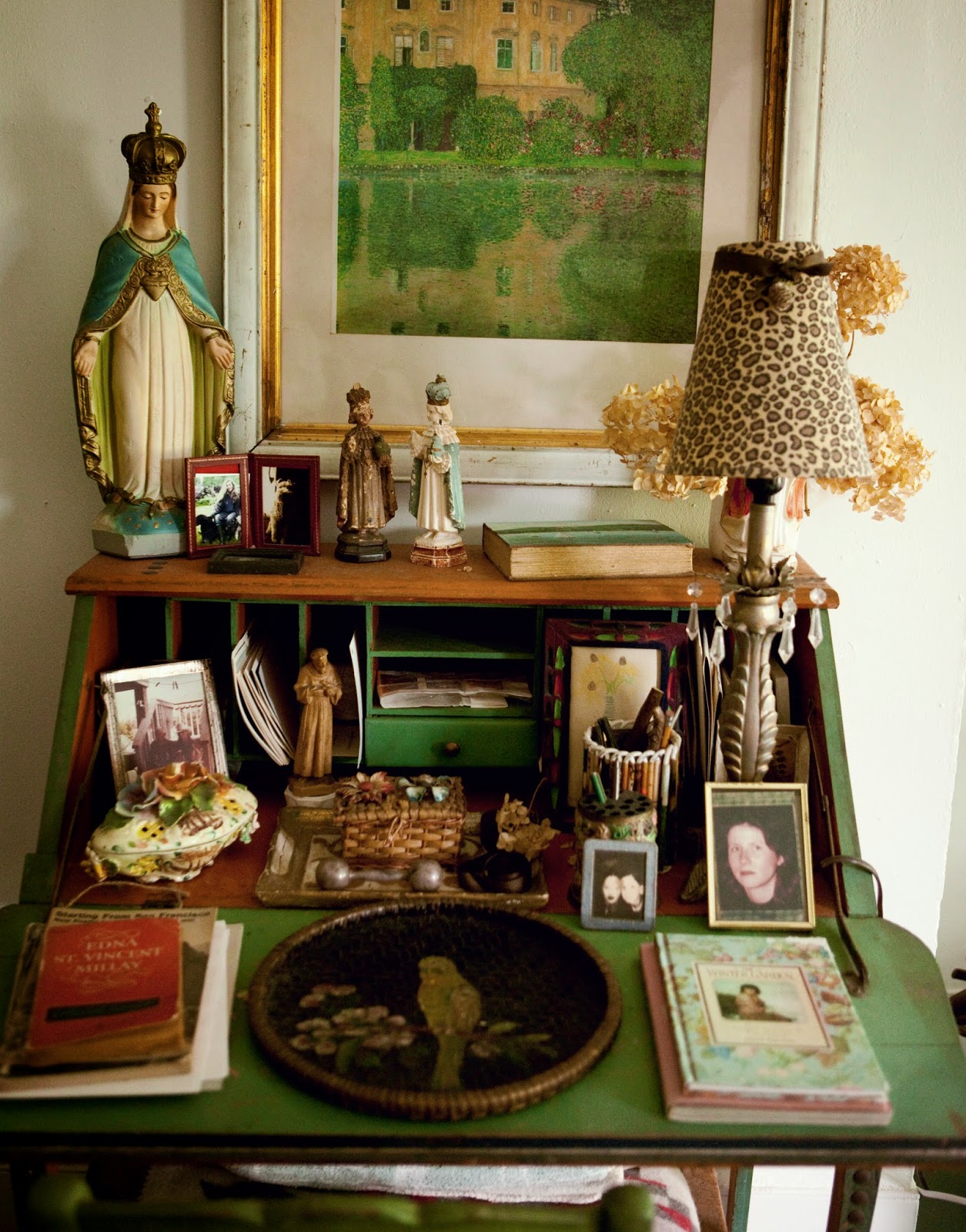 [Mary Randolph Carter's own green desk is a three-dimensional scrapbook.]

They live with their possessions very differently: Mortimer and husband Stephen Gaghan's ever-expanding assemblage of paintings, photographs, books and mementos is mainly corralled on walls and on shelves and is balanced by clean-lined decor while the Bihlmaier family lives surrounded by layers of Native American trade blankets, indigo patchwork, Indian beads, American flags and vintage posters. 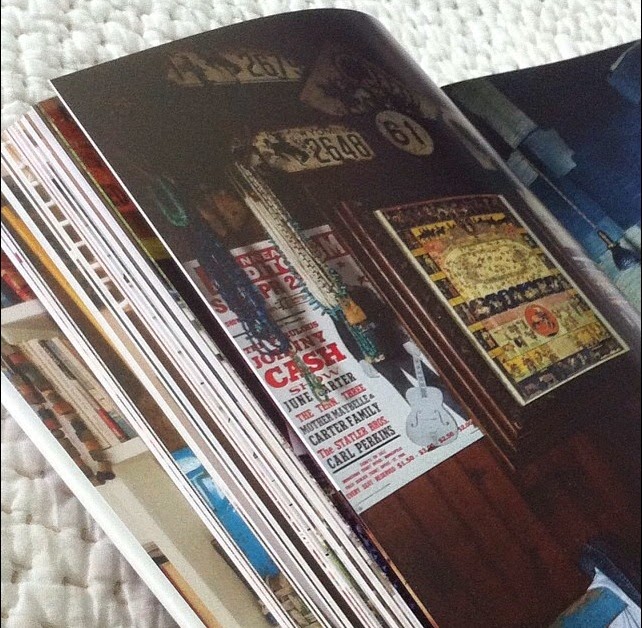 [Just my own iPhone snap of the book.]

Above, here's a tiny peek at some hanging beads and an old June Carter and Johnny Cash poster on the Bihlmaier's scrapbooked bedroom wall. Long before he was a Ralph Lauren veteran, Bihlmaier had a passion for textiles, specifically trade blankets. As a junior high student in Kansas, he requested one for Christmas. The blanket arrived from L.L. Bean and further sparked an interest that still hasn't waned. Today, he is drawn to imperfect examples -- the sort often passed over by serious connoisseurs -- and he has a self-imposed $200 limit.

Many of the objects collected by Carter's interviewees are quite humble, by the way. Some of the pieces are simply found on the roadside or in the attic. If you're already acquainted with the author, you know she's drawn to things that others dismiss as junk. 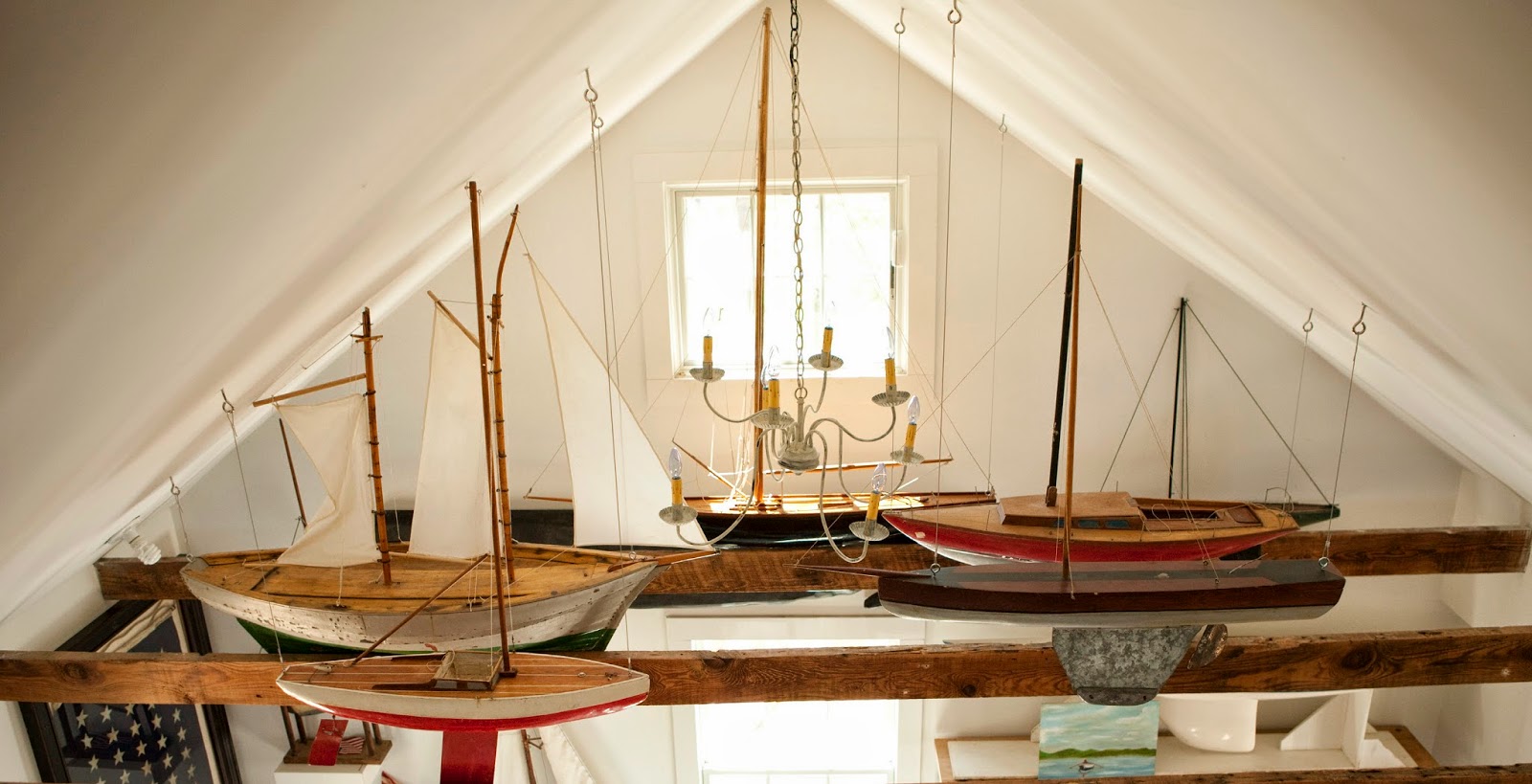 In others' cast-offs, she sees the potential to create a three-dimensional still life or visual poem with elements that rhyme and components that don't. So try not to stifle that childlike curiosity and desire to pick stuff up, Carter says, because at the very least what you gather will likely keep your rooms from looking just like your neighbor's. 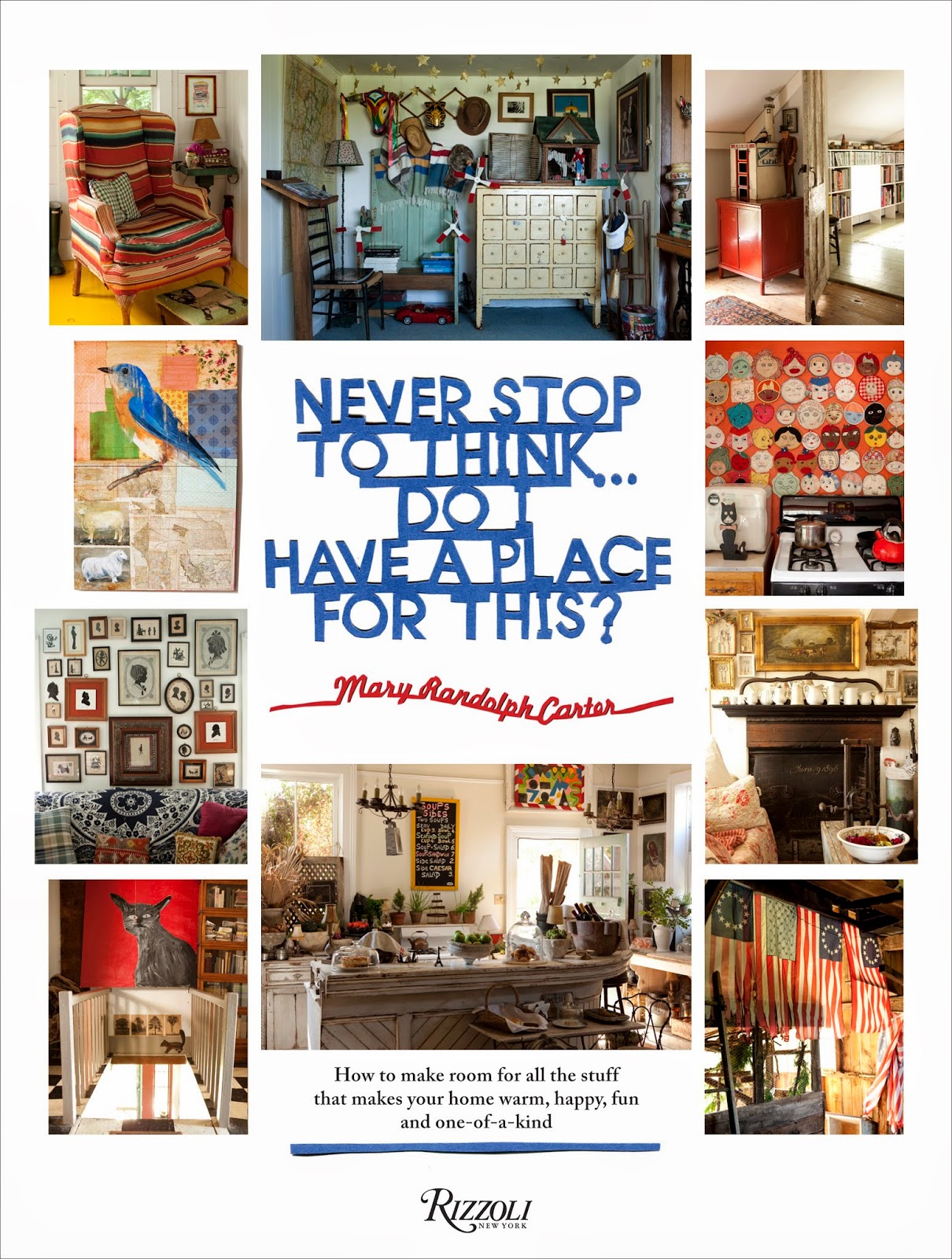 I must get this! I have been mulling over the meaning of "stuff" even more than usual lately and I did really like her previous book. Hope you are well Courtney!

Jacqueline, then you'll love her personal essays as well as the interview. Interesting love stories woven through the book too. Have a great week!

I’m fascinated how one an artist a simple collector! These photos inspired me to decorate my cabin with beauty and love. It is great to stumble upon here and read an inspirational story!

Oh, Courtney,
I just came across your wonderful musings about my new book! I can't wait to share it with son Carter. You read deeply. He worked so hard on his little collection of club soda bottles and lined them up in the most touching way as if they were priceless glass sculptures!
Thank you for your wonderful and heartfelt insight. It makes me want to tell more stories!

warmrest thoughts to you,
Carter

Sebastian -- glad you enjoyed it!

Carter -- thanks for stopping by! Both of your sons have such cool collections and that kitchen of yours is terrific. It was a challenge to narrow the focus here.

Kudos to both Carters.