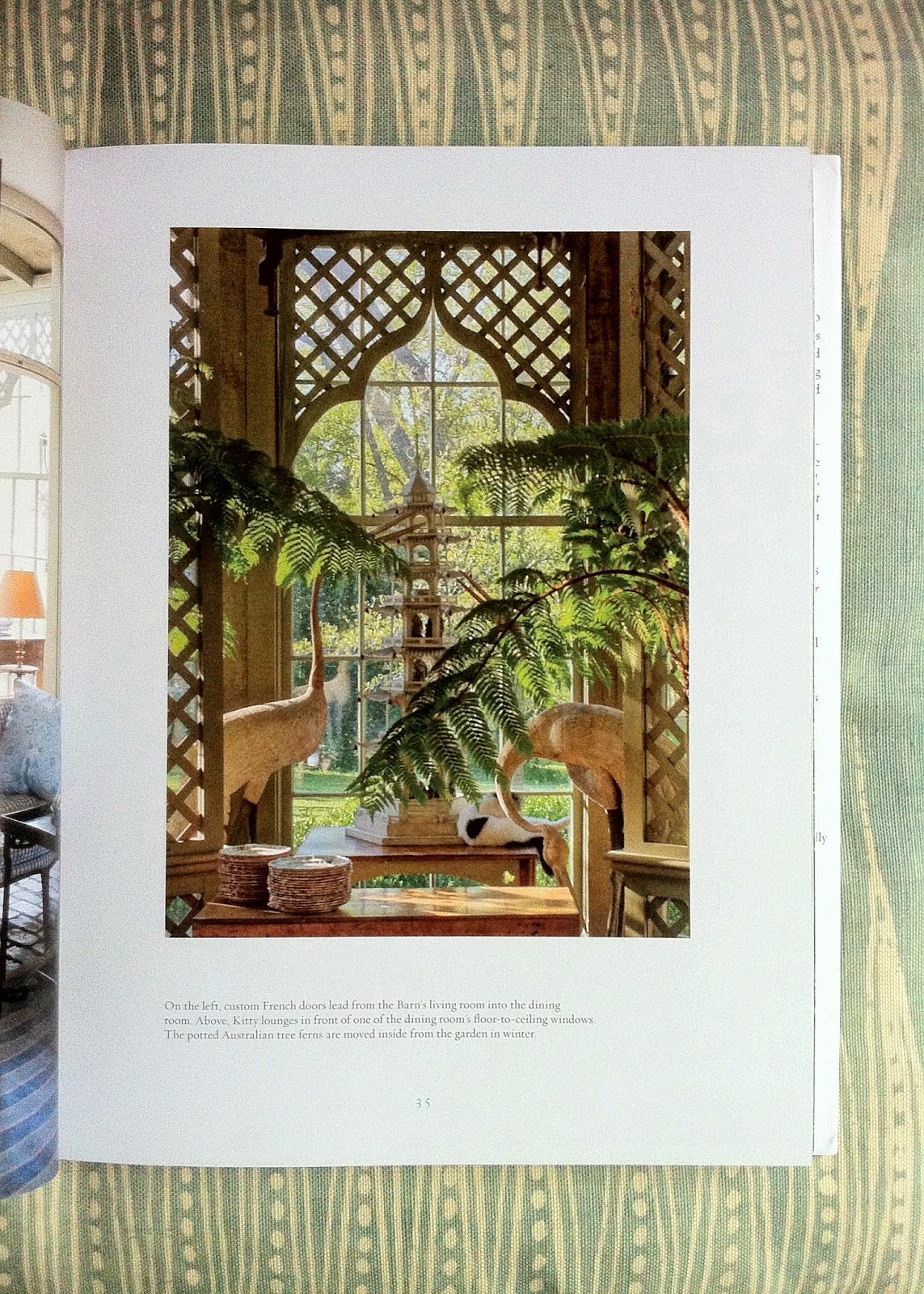 [Book open to photo by Rodney Collins. All images in this post are from One Man's Folly: The Exceptional Houses of Furlow Gatewood, Rizzoli, 2014.]

India? An Anglo-Indian-style folly on a vast English country estate? The first time I saw this view through fretwork framed floor-to-ceiling windows -- a slightly different angle that I initially spied on photographer Paul Costello's site -- I assumed I was looking at some far away place.

But the trellised dining room, aka "glass room," is actually in my home state, in Americus, Georgia,  just a few hours south of the city where I live. Part of a re-imagined carriage house, the soaring, wondrous space is the creation of Furlow Gatewood -- a man described by Bunny Williams as "… one of the most talented and influential members of America’s design community—and one that you have likely never heard of."

One Man's Folly: The Exceptional Houses of Furlow Gatewood, a new book from Rizzoli penned by Julia Reed with her trademark wit, explores this under-the-radar, self-taught architect/designer's private world -- an unexpected compound comprised of the Barn, the Peacock House, the Cuthbert House, the Lumpkin House, and in Reed's words "a succession of jewel-box-like outbuildings."

BTW, apart from the Barn, which began as a restoration of sorts, Gatewood created the entire peacock-and-dog-filled oasis when he was in his eighties. He is now ninety-something.

Although the hand-crafted compound is layered with antiques (the raison d'être for the multiple structures is really Gatewood's unstoppable habit of picking up beautiful old objects and architectural remnants -- in short, he needed space to house his finds), the rooms feel exceedingly fresh. There are beautiful fabrics (think Robert Kime and note, too, the authentic Indian block prints layered on the daybed as well as the framed toile), but they are never used at the windows. Gatewood prefers his windows left spare, and his palette is generally clean: an abundance of white, classic blue-and-white, and soft gray.

He has a penchant for Gothic lattice and gingerbread, however, in his hands, Southern Gothic isn't dark, it's light, airy and welcoming. I think, since Mughal elements and Gothic design sometimes have lines in common, and maybe because Gatewood's place is sprinkled with forty or so live peacocks along with multiple pagodas, not to mention assorted acquisitions from India and other far flung destinations, there is this wonderful sense of "Where am I? Wherever it is, it's someplace out of this world." Dreamy light captured by photographers Paul Costello and Rodney Collins adds to the feeling of escape.

good Grief! I met Furlow at John Rosselli the first time I went there! close to 30 years ago! I walked into the front door....(next to the river) and I thought...."If I die of a heart attack right now; I will die the happiest person ever!!"

FURLOW WAS BACK THERE! BACK IN THE RIGHT SIDE!

I KNOW HE WAS THERE! HAVE YOU HEARD HIM TALK?

HE WAS THERE! AND I MET HIM!

I am just this small decorator from Southern California......but...Furlow paid a bit of attention to me when I SAID MY MOTHER WAS FROM ALABAMA!!!!!!
And I missed my plane the first time I saw John's store next to the "river"! The dogs were lounging on the sofas and daybeds,,,,,,every floor!

I will have to write a blog post about this!

I LOVE YOUR BLOG!!