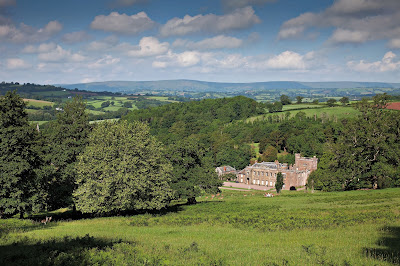 Vendome Press is known for gorgeous books about Britain's grand country houses and this fall, a couple of months ahead of Downton Abbey's fourth season debut in the States, the publisher has released The English Country House written by Goodwood House curator James Peil with photography from James Fennell and Foreword by Downton creator Julian Fellowes. Like Vendome's past books, this tome narrows its focus to ten houses that have never been sold. Ever. Each remains with the original family, having been passed from generation to generation.

So within these English walls real stories have unfolded. Dramas that rival the narratives played out on TV and become part of a house's patina. Fennell has a knack for capturing a certain gently-worn-around-the-edges quality that offsets the built-to-impress formality, and for highlighting quotidian things alongside the precious. 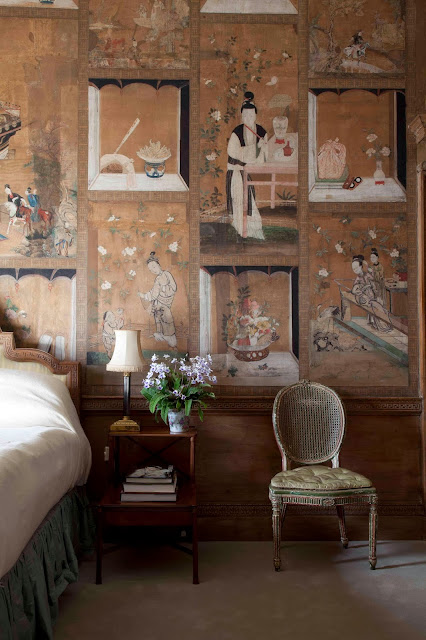 Speaking of objects, for anyone passionate about art history, the book is a treasure trove. "Chinese bedrooms" with handpainted chinoiserie wallpaper and lacquered furniture are common to these houses, and the ne plus ultra of 18th-century chinoiserie, the famous four-poster Badminton Bed made by father and son furniture manufacturers William and John Linnell with a pagoda-esque canopy, is highlighted by Peil -- well, actually, a repro now sits in Badminton because the original was acquired by the V & A in 1921. But I thought I'd draw attention to the collage-like treatment of the walls in Milton's Chinese Bedroom, also singled out by the author.

Rather than being covered with one panoramic scene, Milton's walls are blanketed with separate mid-18th-century Chinese paintings framed with fretwork patterns (a phenomenon Emile de Bruijn has researched). This fretwork design is repeated on the headboard. 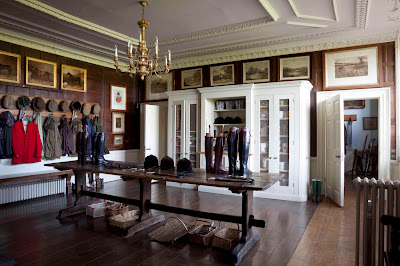 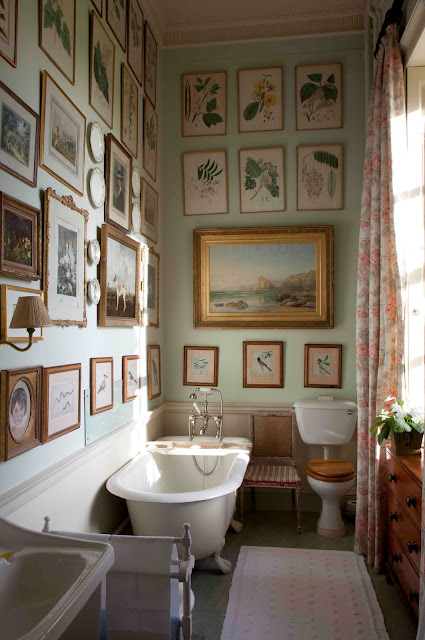 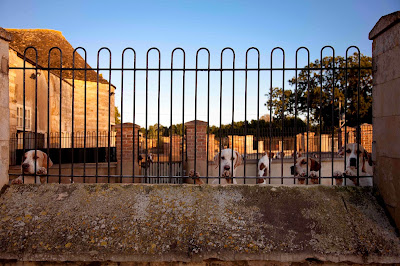 Part Elizabethan, part Palladian, Milton was once home to Sir William Fitzwilliam III, the man tasked with the grim duty of supervising the trial and execution of Mary, Queen of Scots. Fastforward more than three centuries to WWI, and you will find the house serving as a temporary home to wounded British Army officers. Writer Daphne du Maurier visited around that time, age ten; Milton's look inspired her Manderley interiors in the novel Rebecca.

Note the tall riding boots lined up, above? The gear is stashed in Milton's flower room, a terrific example of a utilitarian space captured by Fennell. 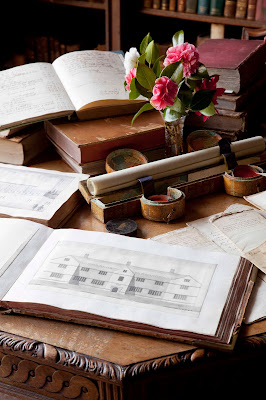 [Personal possessions spread out at Prideaux Place. Throughout the book Fennell shows antiques with backstories and a few contemporary belongings.] 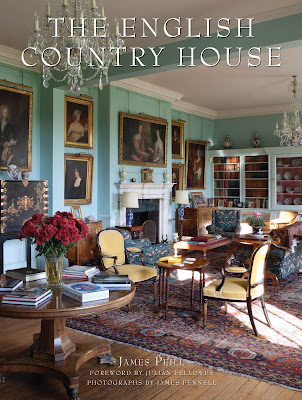 In addition to the oldest palatial estates, Peil looks at a relatively new Arts & Crafts house, Rodmarton. His text for all the houses goes most in depth with architecture and family histories, but textile junkies will find plenty to pour over in the images. 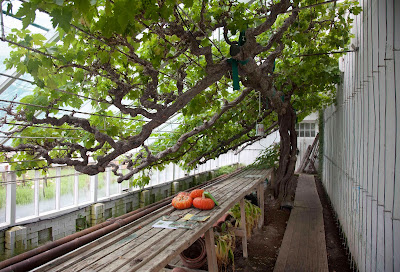 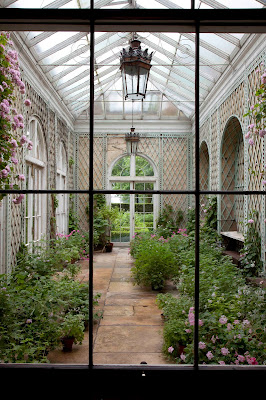 And of course there're the spectacular greens -- the elements that make English country houses so alluring: parklands, gardens and conservatories that set the tone for these places.  Pictured above is the Hackthorn vine, said to be Britain's second oldest after the vine at Hampton Court. Peil writes that only six gardeners have tended it since the 19th century. The trellised conservatory also shown here is one of two at Badminton. 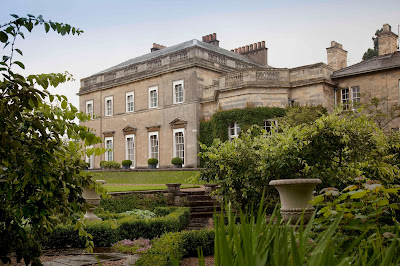 Somehow I've left out the iconic grazing sheep, but they appear throughout the pages, too (appropriate since fortunes made in wool built many country estates).

Thank you for this thoughtful review! I've had my copy sitting unread on my coffee table waiting for the weekend and now I'll know what to look for!

Stefan -- interested to hear which parts interest you most. You can speak to the architecture, of course, much more than me.

Very exciting to read your thoughts about interior design, a fountaine of inspiration and a an open book of knowlodge, really enjoy reading it, thank you so much.
www.ruedigerbenedikt.com/blog

I have just been perusing this book too and was delighted to see that photograph of the Chinese 'collage' wallpaper at Milton - I had previously only seen old black and white photos of it. The images shows the beautiful symmetrical composition of the prints, testament to the skill of the eighteenth-century paper-hangers, about whom we still know too little.

ruediger -- thanks for stopping by.

Emile -- so glad you have a copy. Must be wonderful to finally see the color image! Again, thought of you as soon as I landed on the page. Hope your research yields more answers.