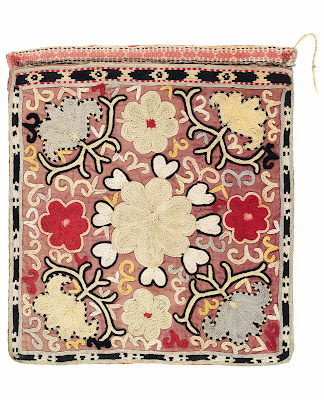 [Unless credited otherwise, all photos in this post by Don Tuttle from Silk and Cotton: Textiles from the Central Asia that Was by Susan Meller © Abrams, 2013.]

The other night I re-watched Diana Vreeland: The Eye has to Travel and thought again about how the former Vogue editor and Met consultant used fashion as a sort of passport to explore the world. Similarly, Susan Meller's new book, Silk and Cotton, has been transporting me to Central Asia. Meller, the internationally respected textile scholar, drew me in with visuals -- colorful, often kaleidoscopic everyday textiles such as bed covers, tent hangings, headbands, horse covers, bags and clothes -- but soon I was learning more about the complex region most of us think of as "the Stans."

Case in point: the early-20th-century Uzbek khalta (small bag) with chain stitch embroidery, pictured above. It was actually discovered in an Israeli bazaar. Meller explains that in the 1970s when Jews were allowed to emigrate from Soviet Central Asia to Israel, many brought their suzanis and other pieces along. (Silk and Cotton includes a fascinating section about the area's centuries-old Jewish community, aka the Bukhara Jews.)


And Meller's thorough research addresses the history of the region's artists, too. During the Soviet era, impressionist and avant-garde works were banned. This meant Robert Falk, an artist influenced by Matisse, Gauguin and Cezanne, and a founder of the Jack of Diamonds group, remained isolated for decades; his work unappreciated until long after his death in the 1950s. 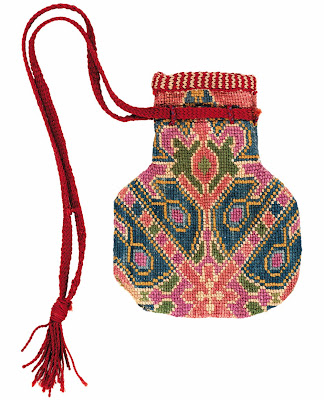 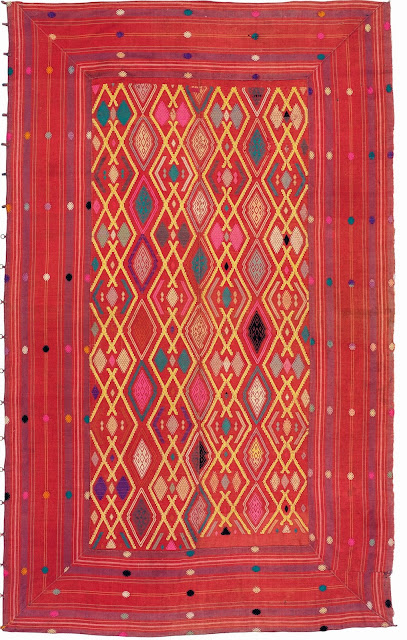 If you primarily like to experience the world with your eyes, Meller offers more than 800 images, most of which are in full-blown color. There are surprises, but there's also a sense of familiarity because traditional Central Asian textiles -- velvet and silk ikats, myriad handwoven stripes, geometrics and floral suzanis -- have had such an enormous impact on Western interior decoration during the past fourteen years or so. From the first antique suzani with an unbleached background photographed years ago in a Michael Smith project to the countless, more-attainably-priced printed cottons that now mimic the old embroideries, Central Asian design is all around us. 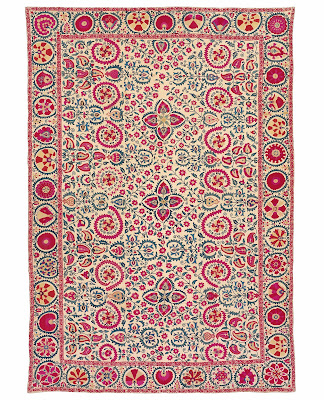 You likely already know that suzanis have a romance about them because they were dowry textiles intricately embroidered by a young girl and her female relatives for use one day as a marriage bed cover (although Meller notes even in the 19th century, some suzanis were made commercially, for trade, and popped up in Western houses). Contemporary decorative artist Robert Kushner is entranced by them. In a contribution to the book, he says:

"Suzanis have enormous sophistication without the fussy coyness of French Rococo elegance...They are earthy, vital, energetic; designed to wow you, seduce you...They seem to arise from the earth...whether these images trace their origins over the millennia to Zoroastrian sun discs, Sassanian garlands, or even older sources, their ancientness is palpable." 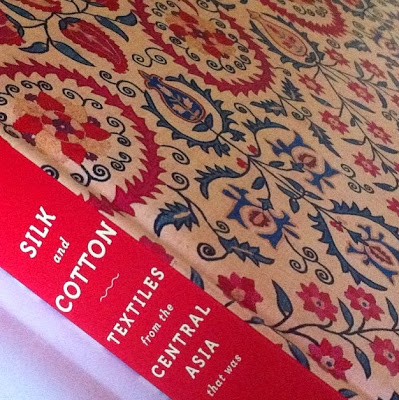 Peek under the dust jacket of the gorgeously designed tome and find a rare 19th-century Nurata suzani with allover pattern. As Meller explores these embroideries in such detail, covering inter-regional differences and the relatively recent along with the very old, the book is an invaluable resource for the suzani section alone. My current favorite is the previously posted unusual dark blue mid-20th-century example. 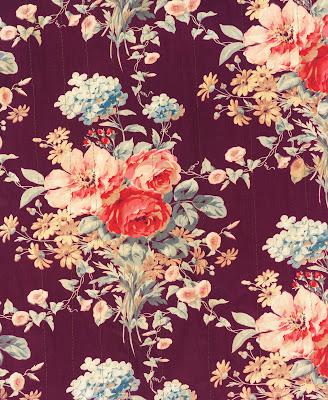 With more representational floral prints back in style, I think Meller's chapter on Russian prints will interest readers who previously didn't have these cottons on the radar. During the 19th and early 20th centuries, countless yards of Russian prints were exported to Central Asia. Much of it came from Ivanovo, the "Manchester, England of Russia." 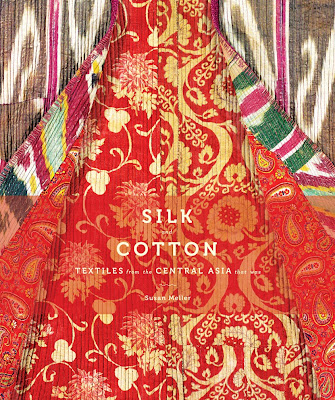 What you're not seeing here (well, except for the bit on the book's cover) are the sumptuous ikats and humbler block printed cottons, because it's a challenge to narrow a field of 800-plus strong images. So be sure to visit Meller's own comprehensive preview and ultimately flip through the pages in person.
Posted by Style Court at 10:01 AM

Fascinating and amusing to read how Robert Kushner waxes lyrical about Central Asian textiles. With his ruggedly romantic imagery he clearly sets himself apart from what he sees as the overly refined prettiness of rococo design, but of course in some ways he is doing exactly what rococo chinoiserie was doing: being inspired by the products of a distant culture and building an imaginary visual language around that:)