A Touch of Kashmir 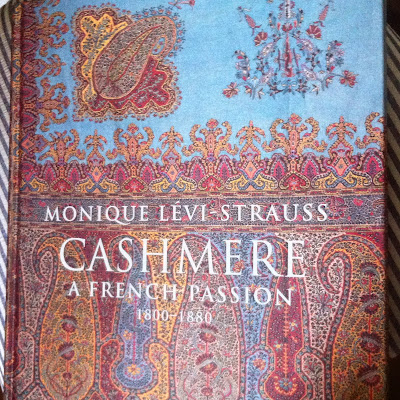 Fun fact: In France, circa 1810, patterned cashmere shawls were associated with weddings (a point made by author Monique Lévi-Strauss in Cashmere: A French Passion - 1800-1880). So luxe and in-demand were the textiles that they could be on par with jewels when it came to gifts from grooms to brides. For the the wedding procession of Napoleon and Marie-Louise, women in the entourage carried neatly folded shawls that contrasted with their very cleaned-lined empire dresses. And second wife Marie-Louise received seventeen cashmere wraps from the Emperor -- all French manufactured, I believe, because Lévi-Strauss explains that Napoleon's Continental Blockade of 1806 essentially barred the original, highly coveted Kashmiri shawls from entering the country. While probably frustrating Paris' best-dressed, the move launched a new French textile industry: fine, Indian-inspired cashmeres.

Anyway, now as then, a little touch of dense jewel-tone paisley looks great against an expanse of solid pale, for a wedding or a room.
Posted by Style Court at 7:46 PM