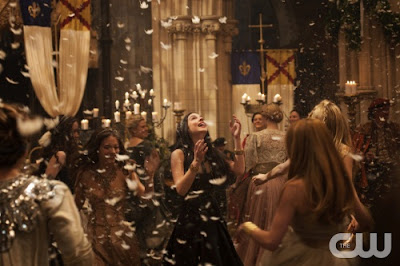 I'm guessing I won't see much sedate embroidering going on during Reign. In the CW's realm, Mary Queen of Scots and her entourage will enjoy dancing, less cumbersome clothes and blow dryers that their real life counterpoints never did. Alas, the actual queen spent many hours painstakingly pushing a threaded needle through thick silk velvet. 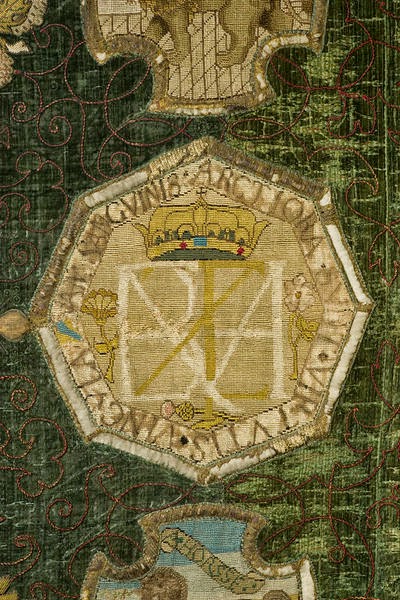 [Embroidered silk velvet in silks and silver-gilt thread, applied canvaswork, lined with silk. Circa 1570-1585. Worked by Mary Queen of Scots and Elizabeth Talbot. On permanent loan to Oxburgh Hall.]

According to the V & A, later in her life Mary used needlework as a form of coded self-expression because her writings were constantly monitored while she was imprisoned in England. But apparently she had professional embroiderers on hand to assist. I stumbled across this detail from her Marian Hanging while searching for some parallels between 16th century textiles and the set furnishings and costumes designed for Reign.
Posted by Style Court at 5:10 PM

Did you watch? I was in stitches - the laughing kind - which offended my 14 year old. Very pretty, very very inauthentic on every count, but I'm sure we will watch again.

Sure did :) I just take it for what it is. Always fun to see how the costume designers/hair stylist take inspiration from the era. More braids, waves and headbands to come, I think. Loved hearing the Limineers too.