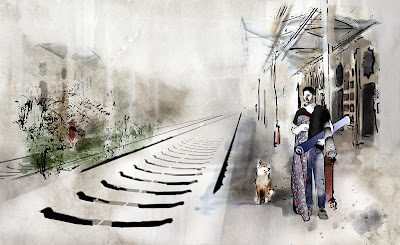 Another designer and textile enthusiast who really gets around is Zak Profera. He tells me that a trip to the Sadberk Hanim museum up near the Black Sea -- a museum visit prompted by a post on Ottoman embroidery spied here -- specifically inspired one of the designs in his soon-to-launch made-in-the-U.S.A. fabric collection aptly titled Haz, the Turkish word for enchantment.  Next week we'll peek at the latest deftly-colored patterns offered by his company Zak + Fox.

For now, look at how artist Vicky Molinelli captured Zak's trek through the region. The illustration "is meant to gesture the Sirkeci Terminal in Istanbul, where the Orient Express once ended," he explains.
Posted by Style Court at 12:31 PM