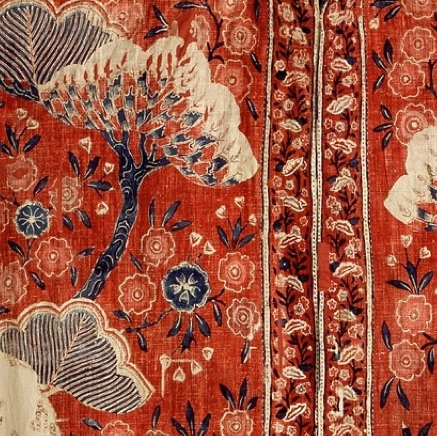 Branches that appear marbleized and foliate veins stylized into slightly wavy stripes: I can't get enough of the pattern within pattern here. The fabric is an Indian (Coromandel Coast) painted and dyed cotton -- another example of chintz done with a red ground to appeal to the Dutch market. And maybe it's just me, but the flattened leaf-like forms and smaller blossoms feel Japanese-inspired. See the full view over at The Met. According to the museum's new catalogue accompanying Interwoven Globe, the term banyan was initially used in the West to describe a practicing Hindu but morphed into the word for loose, Indian- and Asian-inspired long-sleeved men's morning robes in vogue in France, England and other parts of Europe. Think 18th century Robshaw.

For a little background on Indian chintz, click here and here.
Posted by Style Court at 9:26 AM

The flattened leaf forms read almost as Japanese pine and the small blossoms as plum. Any stylized bamboo hiding? It would be likely as the three so often appear together as sho-chiku-bai, the three friends of winter.

Beautiful fabrics. Have a wonderful weekend!

Glad you all appreciate the design! Jacqueline, thanks for the analysis and insights. I'm looking for any hints of bamboo.