Indian Textiles Coming to The Met 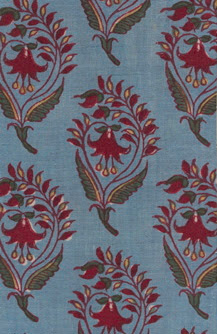 [J. Forbes Watson, Collection of Specimens and Illustrations of the Textile Manufactures of India (detail),
London: The India Museum, 1873–1880. Image via The Met.]

Last month I mentioned one of The Met's highly anticipated, soon-to-open shows, Interwoven Globe: The Worldwide Textile Trade, 1500–1800, debuting September 16 and continuing through January 5, 2014. But there's a small companion exhibition opening even sooner and it involves 19th-century fabric samples that we've touched on before -- John Forbes Watson's collection.


Watson -- who incidentally began his career as a Scottish medical doctor, not an art historian or entrepreneur -- developed a lifelong passion for a wide variety of textiles found on the Indian subcontinent. Ultimately he published compilations of these fabrics as well as a book of Indian plant life, and was even appointed Director of the India Museum. For him, the books were like mini mobile museums, or maybe more to the point, Victorian Pinterest boards that could inspire manufacturers in India and Britain. The Met's new show, An Industrial Museum, opening August 12, explores Watson's second group of textile catalogues, the 17-volume set eventually acquired by Tiffany & Co.'s chief designer from 1868 to 1891, Edward C. Moore. Known for his extensive personal art library, Moore donated his collection to the Museum.

I love that idea - a Victorian Pinterest board - and I see much of Moore's inspiration in this collection.

Jacqueline -- I think he bought them in the early 1880s. Would be interesting to know more about his other choices too.

He was a huge collector of Japanese silver and metalware as well as Middle Eastern decorative arts and metals. But I thought the textiles were evocative of his work too.

Wow! I bet this is going to be an incredible exhibition. I wish I could see it in person. Can you imagine being a traveler in the 1800's and bringing new and unique items to new lands. It's better than having an Amazon box show up on your doorstep!!! :o)

Yes I'm sure there was such a sense of wonder, for Londoners especially to see what Watson compiled.