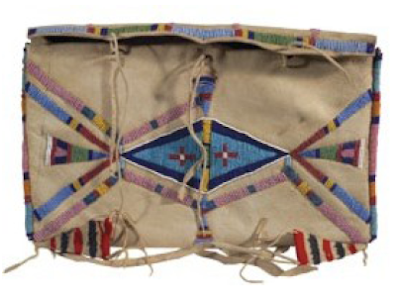 Apparently it wasn't just a Tristan thing: Americans of European descent incorporating Native American designs into their own style during the 1910s and 20s. A soon-to-open exhibition at the Bard Graduate Center, An American Style: Global Sources for New York Textile and Fashion Design, 1915-1928, curated by Ann Marguerite Tartsinis, will look at past efforts to inspire Euro-Americans with the then-so-called "primitive" aesthetic.

During WWI and the years following the conflict, curators at the American Museum of Natural History, in particular, launched a campaign to introduce designers to its ethnographic collections. Textile designers and manufacturers were given broad access to the museum’s holdings, including specimen storage rooms, and in some instances artifacts were even loaned to shops and design houses.

I think many of us are familiar with the African influence on Western design in the Roaring Twenties but perhaps we're less aware of how Andean, Native American, Mesoamerican, and South American sources impacted early 20th century U.S. style. So Bard's new show, offering original artifacts juxtaposed with period fabrics and dress inspired by these indigenous wares, should be an eye-opener. The exhibition opens September 27, 2013 and continues through February 2, 2014. An illustrated catalogue will also be available.
Posted by Style Court at 12:35 PM