Lady of the Canyon 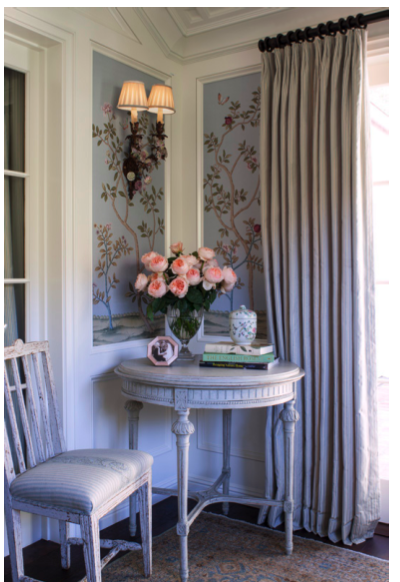 In the next few days I'll be sharing a never-before-published project by designer Schuyler Samperton. This secluded Pacific Palisades house borders the Santa Monica mountains and Will Rogers Park, and is said to have mind-blowing canyon views as well as many rooms with a terrific masculine energy (fitting since it's home to two little boys and two golden retrievers). But shown in this sneak peek is the feminine exception: an office for the boys' mom that Schuyler describes as a delicate little jewel box. To achieve this, she used a Claremont stripe for the curtains and UK-based Fromental's handmade chinoiserie-influenced panels.

Glimpse a bit of the gorgeous rug on the floor? It's one of many richly-patterned old rugs Schuyler found for the house. So get ready for a sumptuous but kid-and-dog-friendly antique Sultanabad, lots and lots of Bennison, antique paisley and of course plenty of fresh flowers.
Posted by Style Court at 5:31 PM

Can't wait to see this reveal.....I am working with a client to create some one of a kind Chinoiserie hand painted papers in her home. We could not wait for a London or Paris paper to be created so I am making my own.
Looking forward to the read,
-LR