Before anyone starts planning a weekend jaunt to Charleston, the Gibbes exhibition I'm about to mention is way down the road. In fact, it's opening January 17, 2014. But I'm excited because we've discussed Renaissance artist Anna Heyward Taylor's Japanese-influenced block prints before, and now this Asia-to-South Carolina connection will be the focus of a new show: The Great Wave: Japonisme in Charleston. 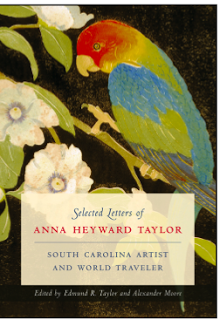 A globe trekker during the early 20th century, when most women had limited opportunities to travel, she studied art in Japan. See the influence in her asymmetric compositions? The crisp colors?

Other Charleston Renaissance artists inspired by Japanese printmaking include Alice Ravenel Huger Smith and Antoinette Guerard Rhett. These women often interpreted local Southern flora and fauna with a stylized, Japanese perspective. Adding to the East-West link, the Gibbes is fortunate to have a strong collection of 19th-century Japanese woodblock prints -- parts of which were studied by the aforementioned artists. The upcoming exhibition will juxtapose the Japanese ukiyo-e school pieces with native Charleston works.
Posted by Style Court at 3:06 PM

Oh how I wish we could meet up and look at it together this winter!

That would be great, Jacqueline. You'd have such an interesting perspective on the Japanese prints.