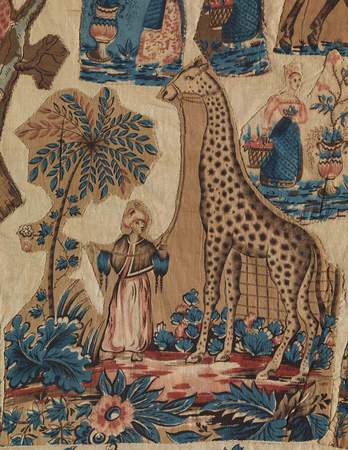 [Detail: Circa 1830 bedcover. Given to the de Young by Mrs. Mary Swaine Morgan.]

It's been nearly six years since I mentioned Zarafa, that remarkable Ethiopian giraffe captured as a baby and presented by Mohammed Ali, the Ottoman Viceroy of Egypt (1804-48), to France’s King Charles X during the 1820s. On her long journey to Paris, she traveled down the Nile then to Marseille, ultimately trekking by foot to the bustling French capital where she took up residence at the Jardin des Plantes. Throughout her life, Zarafa's image was replicated on all sorts of material goods from ceramics to textiles.

Currently on view at the de Young is one of these 19th-century pieces, a cotton bedcover block-printed and appliquéd, surprisingly not in Europe or India but in the U.S. You can see Zarafa is depicted with the Sudanese handler who traveled with her and remained in France, Atir. In conjunction with their exhibition, From the Exotic to the Mystical: Textile Treasures from the Permanent Collection, the San Francisco museum recently posted details on Zarafa's life as a French phenom accompanied by images of the bedcover and other illustrations.
Posted by Style Court at 2:35 PM

Always loved that Zarafa, thanks for the memories.

Dean -- I was excited to see her name pop up over at the de Young. Didn't realize they had this piece with her image. There're great animals throughout the show :)