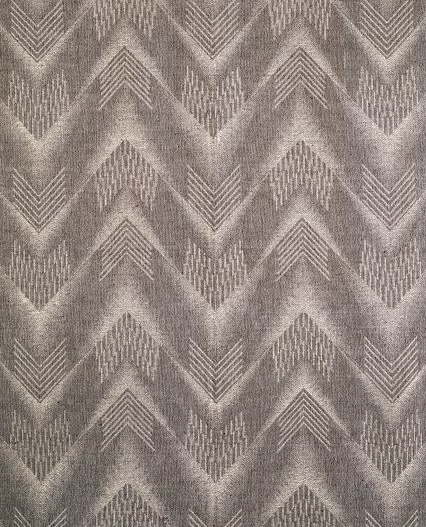 Explaining what some call a polarizing choice of music for his new film, The Great Gatsby, Baz Luhrmann says he wants audiences, especially younger movie goers, to react as teens and young adults in the 1920s responded to jazz, with it's African and African-American roots. This made me think about the visual realm and how African patterns influenced fabric design in Europe during the same period. So, wrapping up the week of Roaring Twenties style, here's an example by Rodier.

The soft grey and white palette reflects a French sensibility, the mix of shine with matte threads seems to be on trend for the era, and according to the V & A, the chevron pattern shows a penchant for African-inspired graphics. 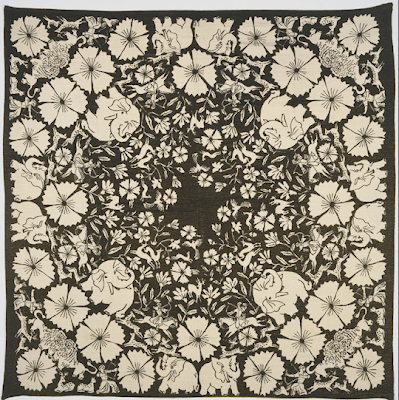 At first glance, Raoul Dufy's printed satin La Chasse à l'arc feels quintessentially Parisian. The 1928, black and gold lamé design is a whimsical floral with creatures from Africa -- lions and elephants --incorporated among the densely packed blossoms. But, in a way, Dufy's preference for flattened, highly stylized interpretations of flowers shows how European artists of the day took cues from abstract African art.

I have seen the zebras in the pool party preview stills of The Great Gatsby. Growing up on a horse farm, I always thought a small herd would look so great grazing the pasture. But they are truly wild and the live ones seen on film are usually mules that have been made-up to appear as zebras.

Something to keep in mind the next time I'm watching a movie with a herd of running zebras!

Very cool post Courtney! Not many people discuss African influences on textile design. Love this, and I can't wait to see Gatsby!

Thanks Jeanine! I'm fascinated by the influence of Kuba cloth, strip-wovens, indigo etc.

There is always something to learn when viewing Style Court; thank you for sharing!

Thanks for reading, Seule! Always appreciate the kind comments.

Thanks for reading, Seule! Always appreciate the kind comments.