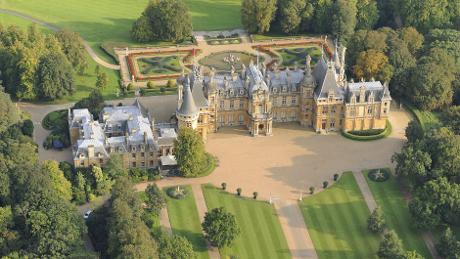 In contrast with the understated house referenced in the previous post, 19th-century Waddesdon Manor is about full-tilt grandeur: the bold Victorian statement. 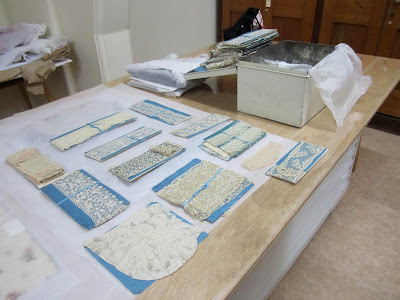 Stylistically, the country house built by Ferdinand de Rothschild suggests a French châteaux complete with formal parterre. And it's the latter, already-well-known element that may soon come to the attention of a wider audience. Some filming is reportedly taking place there for A Little Chaos, the tale of a 17th century landscape designer (Kate Winslet) who finds herself at odds with landscape architect Andre Le Notre as the two collaborate on a project for King Louis XIV (expected release 2014).

But before the film is out, artist Philippa Lawrence will install a special textile-inspired planting in the large garden beds that flank Waddesdon's famous fountain. She spent a lot of time in the house's textile archive and while exploring came across a stash of painstakingly crafted chinoiserie lace that sparked the design of this year's late-spring/summer installation. Darning the Land: Sewn. Lawrence believes textiles are typically under-appreciated, even in historical collections, so her aim is to highlight these feminine pieces as well as the work of Alice Rothschild, Ferdinand's sister.

Check Lawrence's site for images during the next few weeks or plan a visit to Waddesdon in Buckinghamshire.
Posted by Style Court at 2:04 PM

I adore Waddesdon, thanks for posting about it, and the new film too.