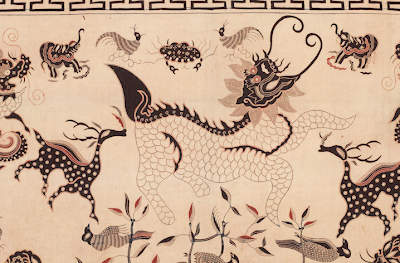 First, a quick reminder: Batik: Spectacular Textiles of Java continues on view at SF's Asian Art Museum through May 5. 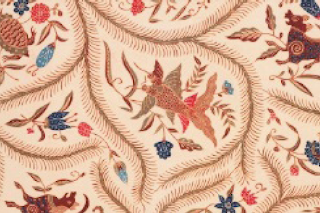 [Another batik detail from the Asian.]

A small exhibition with big impact, Batik looks at sixteen cloths decorated using molten wax resist techniques -- the type of patterning that's so closely associated with Indonesia and frequently done by women working at home. Some of their most detailed designs may represent a year's worth of effort, say curators. Motifs including auspicious animals, mythical birds and imperial symbols are evidence of a lot of cross-cultural pollination. (Over centuries, varied groups have crossed paths in Java, specifically.)

Just as Batik winds down, a new show exploring mythical creatures and other allegorical figures will open over at the de Young. From the Exotic to the Mystical: Textile Treasures from the Permanent Collection debuts May 4. Expect to see European textiles encompassing English, Spanish, and French pieces that demonstrate a range of techniques from embroidery to lace-making.
Posted by Style Court at 6:52 PM

Batik is always so beautiful. I love how cross-cultural interactions are always immediately evident in artworks. Everyone's always looking for inspiration and experimentation in their creative pursuits.

Arts always reflect the thoughts and mindset of the culture where they are produced. The designs look so good. There is no match for them.