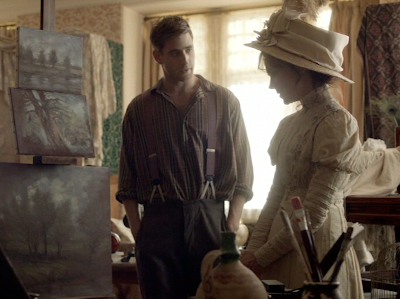 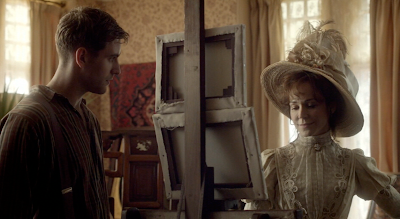 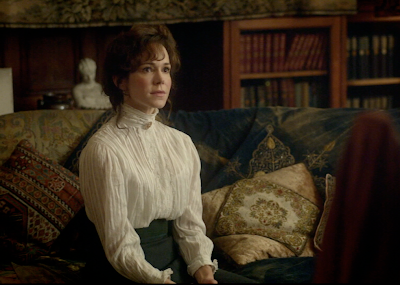 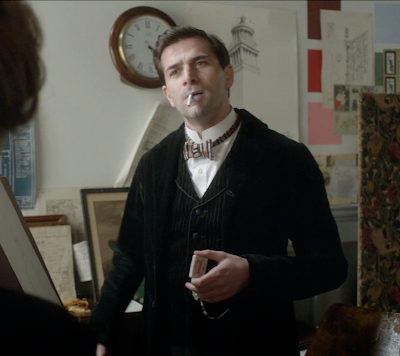 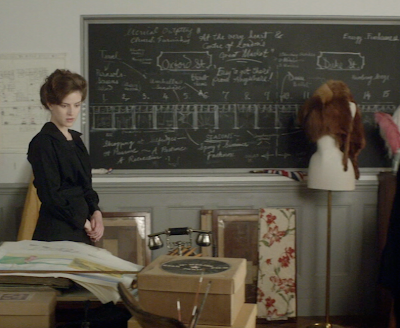 There's a lot to look at in Masterpiece's new drama, Mr.Selfridge. Pattern and print, for example. Layer upon layer of gorgeously printed, woven and embroidered fabrics. 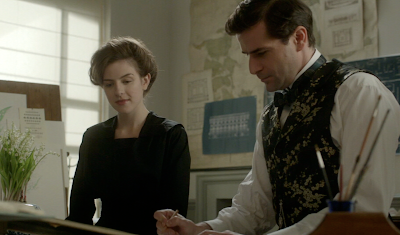 I've been turning to PBS on Sunday nights to see what set decorators Sophia Chowdhury and Terry Jones (along with the entire production team helmed by Rob Harris) have done. Favorite sets so far? The textile-filled atelier of artist Roddy Temple and the studio of Selfridge creative director, Henri Leclair. (Was the title creative director actually used in 1909? Time to consult Jan Whitaker's book, The World of Department Stores.) Both men's working spaces appear flooded with natural light -- airier than the other series' sets -- yet they're also chockablock with visual stimuli.  Like florals. 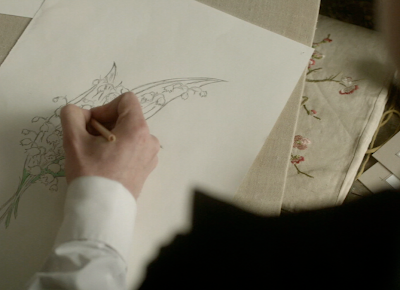 Many of the prints call to mind Liberty fabrics of the day, making me hope the competing London department store will have some sort of cameo in a future episode. 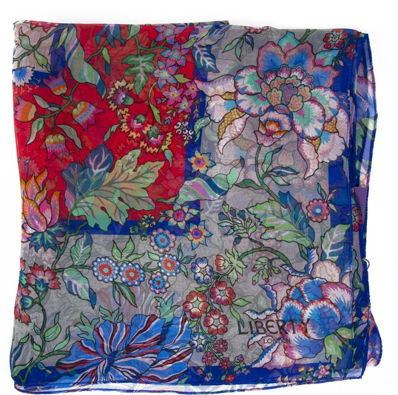 In Atlanta, the Mashburns' love affair with Liberty continues. New to Ann Mashburn are Liberty Scarves. 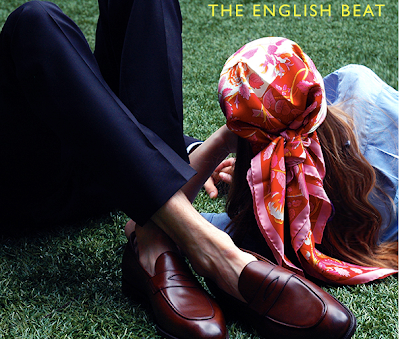 The designs are so lush, it's hard not to consider framing one, in lieu of a conventional painting. 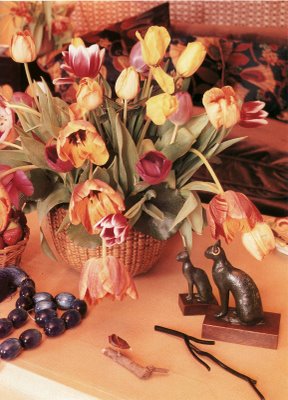 [JBKO's library circa 1973, with her pillows made from Liberty scarves as seen in Horst Interiors.]

Or, as we've touched on before, turning them into pillows a la Jackie O. But the ponytail option is pretty great too.

FYI: The V & A looks at London department store architecture in the 1920s and 30s here.
Posted by Style Court at 5:24 PM

What do you think of the show itself? Not historically accurate visually in so many regards but do they capture the 'essence' of the times, like with Downton Abbey? Thats what matters to the average viewer today I would think and not being slavish to the style of the time period, which would probably scare away a lot of viewers!
Agreed that the best sets are those you mention!

Well you only have to put the word Liberty anywhere near a post to know it will grab me - but I am even more excited by the show recommendation. I hadn't heard anything about Mr. Selfridge! Hoping it is on iTunes...

It is on iTunes, Jacqueline. And, I guess this isn't accessible to you overseas, but PBS offers free streaming the day after an episode airs.

Since you haven't seen it, I won't comment on the drama either way. It's so much better to try something without being pre-influenced. Lots of coverage goes for the Mad Men-meets-Downton Abbey-in-the-City comparisons. Visually, because you like Brandolini and appreciate Castaing, I think you'll dig many of the chairs :)

But to Stefan's point, yes, I agree it's sort of "spirit of the age" and "spirit of the Selfridge story" interpreted to appeal to a contemporary audience. In episode three, there was a chic female ad woman from J. Walter Thompson -- I'm so curious to learn if there's an actual figure who held a similar position circa 1910.

Stefan, how about that amazing shot of the iron work/stairs in the artist's building? I'm thinking the architecture is closer to reality and the interior decoration is a slightly more poetic interpretation. But you can assess the architecture better than me. I know the producers went all out building their replica of Selfridges.

Oh, and I enjoy the windows very much. I think we really get a sense of how special it must have been for shoppers and just anyone passing by to encounter those early window displays/narratives. And I like the sense of energy created with the fast camera work.

I have a lot of work to do here today and it is gorgeous out with the final bits of sakura, but I am dying to stay home and watch. It will have to keep for tonight. Is it suitable for an (almost) 14 year old?

On another note, did you finish Possession? I have been waiting for a green themed post or something of the like...
:-) J

Hi Courtney- I was on the Ann Mashburn site five minutes ago looking at the Liberty scarves and then I got your post into my email! Synchronistic!
Hope all is well! LC

Jacqueline -- finished it in the first four days. Loved it!!

Mr. Selfridge is tame. Essentially like DA, so far. A little more bedroom action but all very PG. There's a storyline developing with alcoholism and family violence but also completely restrained. Like the soaps of yore.

Yes, you can tell that the store itself seems so correct -no? It's so obvious right away when they get the backgrounds right -it sets the tone.

Of course, I love the hats! The clothes and interiors are so lovely who cares if they are slaves to correctness. In my ongoing, perhaps never to end, remodeling project I'm finally covering up the low flying soffit at the end of my living room (home to a covey of ducts!) and am having columns with mirrored panels to box in the offender and turn it into alcove/mirrored wall. I told my husband last night when the mirrored panels started going up that I think Mr. Selfridge would approve.

Glad you finished and loved Possession!

Now you've got me thinking about all the mirrors on set. And, yes, the hats! They seem bigger than DA's in the early years. As does the hair. Wonder if it's a sign of the very minimal time difference -- pre 1911? -- or the costume designer's preference? Doesn't matter. All about setting the tone.