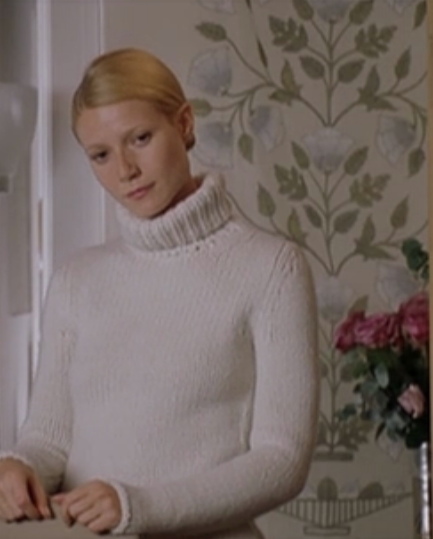 [Screengrabs are from Possession.] 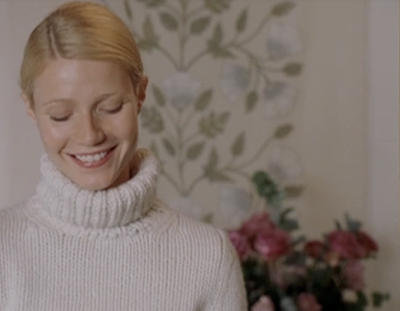 Let's rewind to 2002.  If your weekend included a Gwyneth Paltrow movie, she was likely cast in the role of an Englishwoman. Take, for example, Possession: in this one she plays contemporary women's studies professor Maud Bailey. And while the film is comprised of flashbacks to the Victorian era -- actually lush scenes of the Victorian Avante-Garde, a movement she studies --  set decorator Ian Whittaker also gives us clues to Bailey's own tastes and personality via her flat outside London. 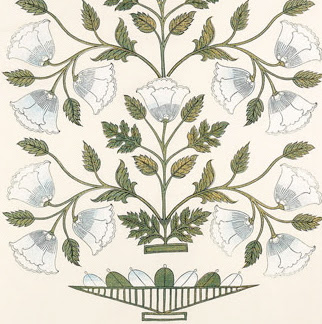 Notably there's Brigitte Singh's Indian handblocked panel, Blue Tara, hung on a wall rather than used as a curtain. Similar concept to hanging just one or two chinoiserie wallpaper panels as art, but approached more casually. 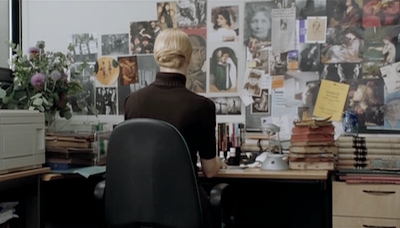 Also tacked to walls in Bailey's office are scores of pictures, many suggesting the works in this current NGA show. 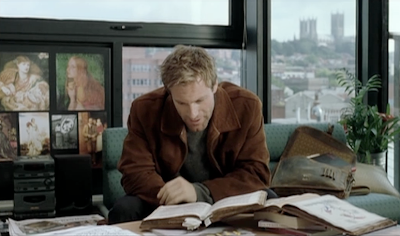 [Aaron Eckhart on the duck-egg-blue loveseat in Bailey's office. His terrific battered leather satchel obscures the pillows but provides a great contrast with the feminine, fresh-cut flowers.]

To see small Chinese wallpapers and other painted panels framed in centuries past, click here.
Posted by Style Court at 5:53 PM

This is one of my favorite movies-a visual feast and surely the winner of "Best Bun" category. :-)
We just returned from Istanbul-saw amazing textiles from a private collection, and bought some great things for The Outpost.

Aleta -- thanks for the confirmation!

Spot on! Loved the images. BTW the book was much better than the movie!

HBD -- Thanks! One of these days I need to finally read it.

One of my top books of all times! I always have a copy at hand - side table here, book shelf at the beach, paperbacks scattered elsewhere. You must read it! And AS Byatt's other writing is extraordinary too. She wrote a wonderful piece on the new ceramics galleries at the V & A and on Edmund de Waal (if you haven't read his "The Hare With Amber Eyes Yet" then that's another for the list) But I can watch the movie on rewind too - love the way they made Aaron Eckhart's character American!

Jacqueline -- ok, now I'm sold. Will have to read it this summer. Will look for the ceramics piece too. Thanks!

A classic Style Court post, teasing out the historical, cultural and gender references in a film's production design :) And thanks for the link!

Emile -- last night i finally started reading the book. Decided not to wait 'till summer. Lots of post potential -- use of green etc. :)