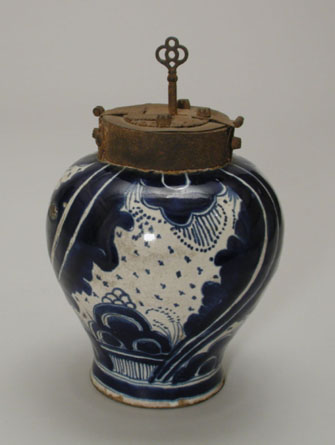 
Chocolate plus blue-and-white pottery: what's not to like? I think these Mexican Talavera pots used to store the ancient indigenous delicacy may just be my latest favorite thing (note the chocolatero in the previous post). With Asia Week in full swing, it's interesting to think about how Chinese design influenced their look.

Several centuries ago, potters in Puebla would have had access to blue-and-white Chinese export porcelain because the Mexican city was on the trade route between the East (specifically the Philippines) and Spain. According to The Met, masses of Chinese wares actually landed in Mexico and were used by Pueblan potters for inspiration. Curators at Berkeley's Phoebe A. Hearst Museum of Anthropology add that the cobalt oxide blue and white glazes ruled for a long time. Multi-color pieces didn't come into vogue until the 19th century.

Btw, U.S. appreciation for Mexican Talavera and related work owes a lot to the efforts of pioneering women including early 20th century collectors Phoebe Hearst and Emily Johnston de Forest. The Met's 1920s catalogue, "The Emily Johnston de Forest Collection of Mexican Majolica," is online here. While the illustrations are a bit grainy and only in black-and-white, you can still make more design connections between the very old and the very new.
Posted by Style Court at 7:00 PM