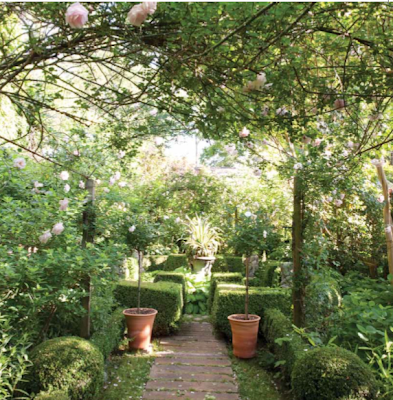 [Unless credited otherwise, all photography in this post is by Susan Sully © Houses with Charm: Simple Southern Style, Rizzoli New York, 2013. Published with permission.]
Southern style as typically depicted in the movies isn't what you'll find in Susan Sully's new book. There are no grand Georgian or Greek Revival digs. Instead she's turned her attention to the kinds of places many of us natives admire most: the unpretentious "double-shotguns" of New Orleans and early Creole houses of greater Louisiana, the cottages tucked into old tree-lined Atlanta neighborhoods (see Ryan Gainey's garden above) and the brick townhouses of Savannah.


Aesthetically, the houses on her radar are diverse but they all have what Sully describes as a sort of disarming quality -- an ability to enchant. Hence the title, Houses with Charm. 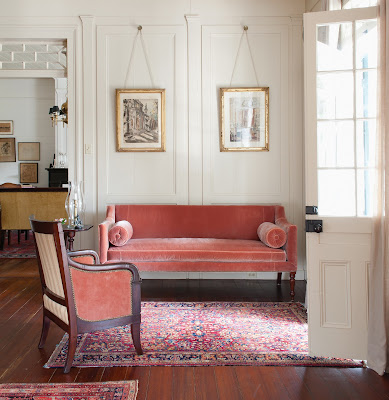 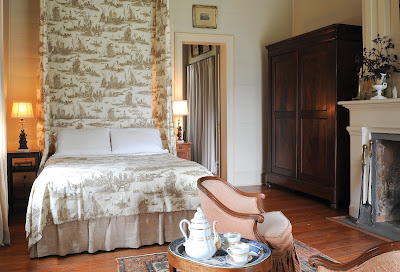 What I've noticed about the sixteen included residences is a nod to tradition -- whether obscure or more obvious, in the case of Richard Gibbs and Randy Harleson's LeJeune House, above -- combined with lots of personal warmth.

Sully says that Harleson, author of New Roads and Old Rivers, and architect Gibbs distilled Creole, French Colonial and American looks for a breezier, dressed down take on the classic Louisiana country house. Appropriate because, dating back to 1790, the bones of their place are Creole with later 19th century modifications in a reserved Classical style. In their sitting room pictured here, Sully specifically notes the transoms with muntins in a running-bond brick pattern above interior doorways and Creole-style divided glass doors. The absence of foufy curtains and upholstery lets these architectural details shine. (And speaking of personal warmth, those watercolors above the sofa were painted by Gibbs's mom.)

In the master bedroom, a long swathe of boat-themed Scalamandre toile makes for a soft note in an otherwise restrained space. 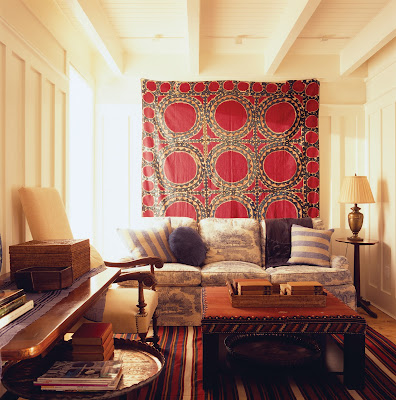 Used in a very different design mash-up, the soft blue-and-white toile sofa in this waterside Mid-Atlantic house done by Mona Hajj becomes the quintessentially Old School piece that serves as a European counterpoint to a host of Near-Eastern textiles: a striped Persian kilim; a Turkish suzani; and another Persian rug covering the Ottoman-style table. 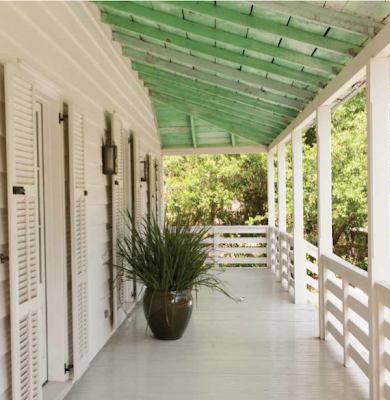 Down the coast at Sullivan's Island, the Cooper's previously mentioned house is youthful with a modern edge but retains a strong sense of place. 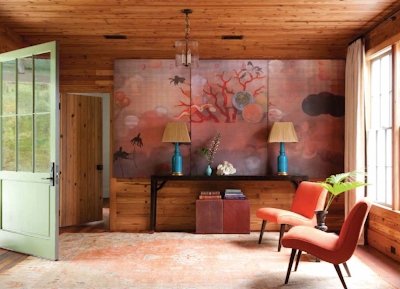 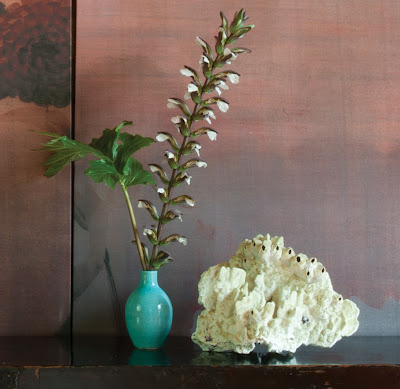 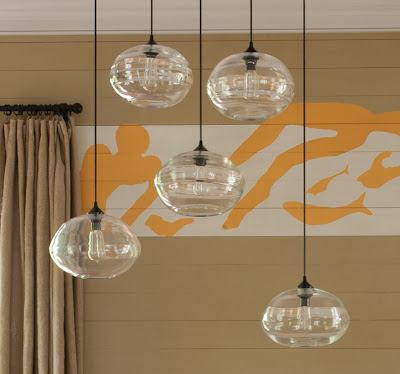 One of designer Amelia Handegan's most unexpected strokes is the dining room mural. She commissioned Kristin Bunting to paint the walls with swimmers inspired by Matisse's abstracted cutout figures that dominated his own dining room walls at the Hôtel Régina in Nice. On paper I might think an interpretation in South Carolina would be contrived, but somehow it really works in this vernacular circa 1890 beach cottage. To see the entire mural, and how beautifully it connects with the adjacent living room, flip through Sully's latest book when it hits book stores mid-April. 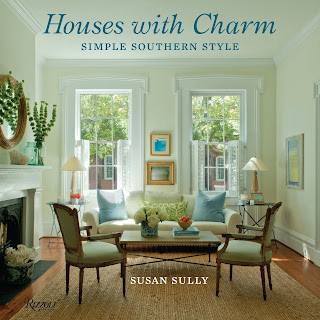 Regarding Matisse, it seems as if we've been talking about LACMA's new Brody acquisition forever. 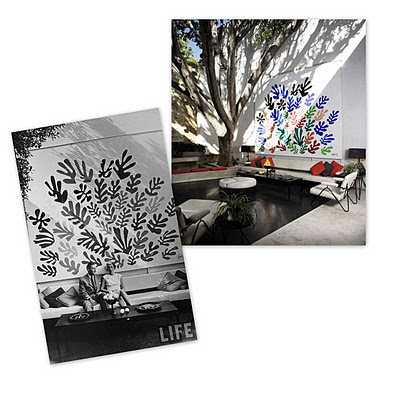 [Top right: Kate Carr photo of Matisse's monumental La Gerbe (The Sheaf) (1953) commissioned by  Sidney and Frances Brody of L.A. for their mid-century A. Quincy Jones-designed (and Billy Haines-decorated) house -- image via Christie's. Lower left: Sidney and Frances on their patio with the piece -- image via LIFE.]
Now, though, beginning April 21, the public can view the ceramic installation La Gerbe along with supporting materials such as Matisse's original maquette for the project (on loan from the Hammer Museum); the initial color samples he sent from France to the Brodys in California; Mrs. Brody's candid accounts of the process she and her husband went through with Matisse during the commission; her correspondence with the artist’s son and dealer, Pierre Matisse; and archive press about La Gerbe and its first installation.

Also of interest: Rebecca Rabinow's Reading Matisse over at The Met online.
Posted by Style Court at 11:59 AM

Beautiful! And most important for a house with charm, a graceful host who makes all feel at ease. The TRUE secret to a charm filled home.

What a lovely book ~ everything looks so breezy and beautiful! Oh, and what a treat to see such lush greenery. (sigh)