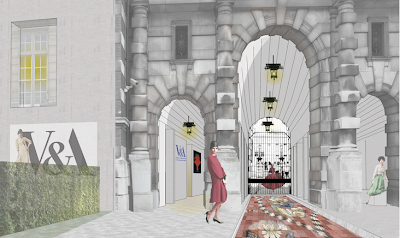 Remember an earlier announcement about the V&A's monumental new Clothworkers' Centre for Textile and Fashion Study and Conservation set to open at Blythe House? Well, textile enthusiasts don't have to wait too much longer to take a peek. The project is reportedly still on go to open later this year.

Designed by Haworth Tompkins to be more accessible for students, the general public, scholars and curators, the new facilities will be spacious enough to accommodate all in one place the V&A's vast study objects, bringing fashion and textile collections together, and encompassing both the museum's Asian and European holdings (by vast I mean over 100,000 pieces). 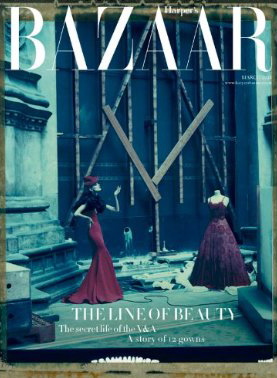 And speaking of access, in anticipation of the Clothworkers' Centre opening, Bazaar UK was given an unprecedented opportunity to shoot inside the V & A's rooms. A story by curator Oriole Cullen accompanies dreamy photographs by Cathleen Naundorf. Although the focus of Cullen's piece is fashion -- she explores twelve specific dresses from the archives -- there's also helpful background on the existing storage space with its charming old patterned terracotta-tiled floor. Cullen further explains why the move is happening and what will become of the original storerooms.

The V & A shop is part of the collaboration too. Currently for sale are copies of Bazaar's March 2013 issue featuring two limited edition covers from the museum shoot.

Curious about the soon-to-open center's name? Major funding was provided by The Clothworkers' Foundation.
Posted by Style Court at 2:13 PM

Do you have an exact date of when it will open Courtney?

Jacqueline -- I don't. Sorry! I know a lot of travelers are curious about summer. As soon as I have an update, I'll share. BTW, there's a big 80s fashion-related show that will be on at the museum this summer, if you're going to be in London :)