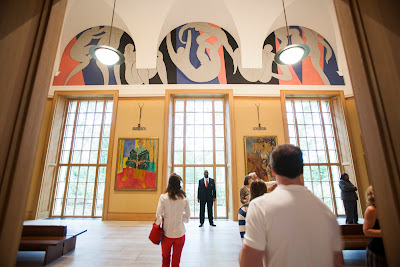 [Unless credited otherwise, photos by Ryan Donnell. © 2012 The Barnes Foundation.] 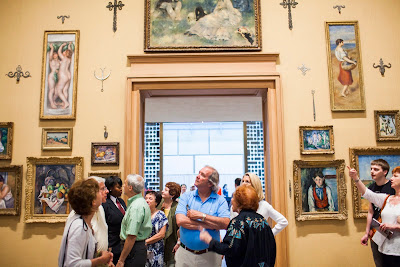 Like enormous three-dimensional pinterest boards -- or maybe thoughtfully crafted image-only tumblr pages -- the wall "ensembles" arranged by notoriously independent-minded art collector Dr. Albert C. Barnes are complex mixes in which modern masterwork paintings and 14th through 19th century hardware (hinges, locks) hang together against a backdrop of burlap. It's definitely a subjective combination, as Emile de Bruijn has said, but one that's informed by Barnes's theories about art appreciation. His original intent was for the viewer to really look at the pieces -- see connections in terms of line and form -- rather than hurry past. 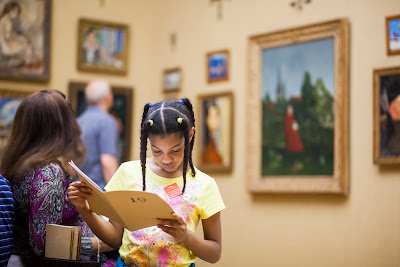 Barnes, a self-made man, lived from 1872 to 1951 and passionately collected works by Matisse and other 20th century giants as well as African art, Native American textiles, Pennsylvania furniture, and more. 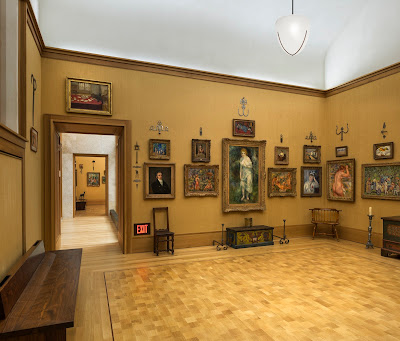 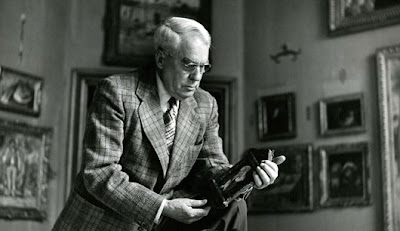 When he established the Barnes Foundation in the 1920s, he wanted to share his collection with the general public -- his own factory workers and groups that, during his era in particular, were far less likely to frequent museum galleries. So Paul Cret was commissioned to design a gallery and adjoining Barnes family house within an existing arboretum in the Philadelphia suburb, Merion.

Of course, the world has changed drastically since the stunning collection first went on view in 1925. In recent decades it seemed to many, myself included, that the Merion location and original facilities made the art less accessible to the very people Barnes wanted to reach. Thus, the Foundation forged ahead with highly controversial plans to re-install the collection in a newly built museum in Philadelphia. Tod Williams Billie Tsien Architects were tasked with replicating the domestic, gallery-within-a-garden vibe of Cret's design, and with replicating Barnes's eccentric ensemble hangs too, all the while creating something fresh that would in no way resemble a Disney-esque reproduction. 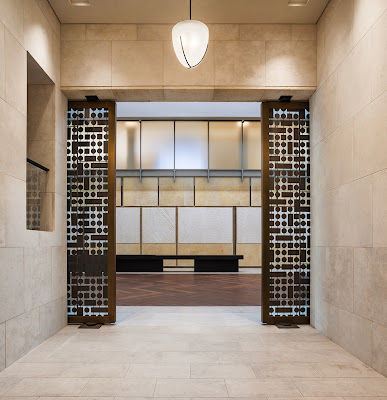 Their welcoming, light-filled building opened in May of last year and already three books about the project have been published. Not to mention numerous articles in the press. 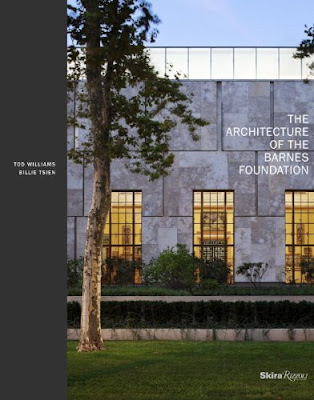 To date, I've read The Architecture of the Barnes Foundation: Gallery in a Garden, Garden in a Gallery by Tod Williams, Billie Tsien, and Kenneth Frampton. Well-illustrated with architectural and landscape renderings, new installation photos and archive images, this book details the challenges and goals of the project specifically from the architects' perspective. 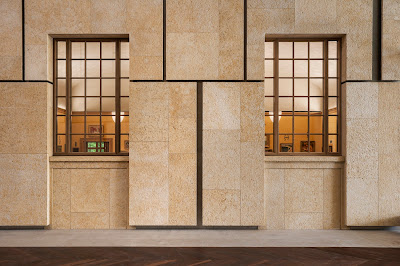 [View of the Light Court, looking into the Collection Gallery.
The Barnes Foundation, Philadelphia. © 2012 Tom Crane.]

Because the new building has received so much press coverage, I wanted to share some highlights you may be less aware of. 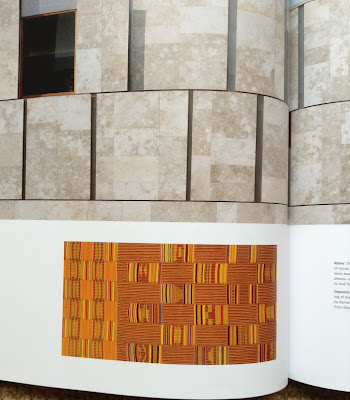 First, the subtle kente cloth-inspired facade. At the original Beaux-Arts style limestone building built by Barnes, Cret surprised visitors with African-themed tilework in the entry. Williams and Tsien decided to "wrap" their building in rectangles of stone resembling strip-woven African textiles (nods to both Barnes and Matisse, a collector as well). 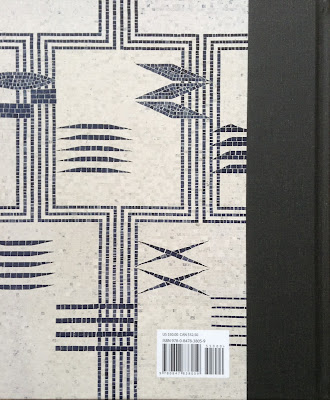 The architects also did a floor mosaic based on kente cloth; a wonderful close-up rendering covers the back of the book. And previously pictured midway through this post (plus below) is a pair of doors suggestive of African metalwork. 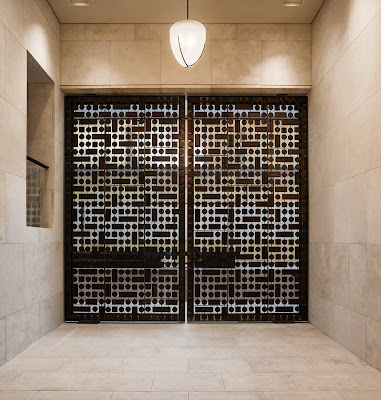 Another African reference is the Kuba cloth-inspired frieze under Matisse's The Dance. Roughly 90 years ago, Cret did a frieze based on African masks but Matisse felt that design interfered with his work. Tsien, in response, created a simplified yet still distinctly African architectural detail. 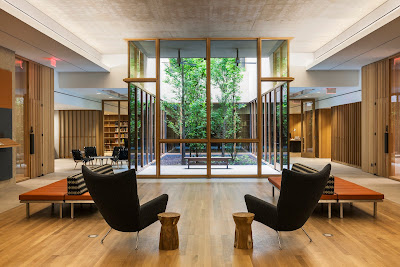 What isn't coming across in this post, but is expressed beautifully in the book, is the interplay between nature and the man-made...exterior and interior. The architects also give the craftspeople their due; a plaque installed at the museum credits over 2,000 workers who physically contributed to the building. The book's forward states that when the construction party was held, throngs of guests lined up to photograph individual names.
Posted by Style Court at 4:58 PM

Wow! What an amazing museum. Thanks for introducing me to it! I've been on a major Matisse kick since seeing all of your photos on Instagram. Which Matisse documentary were you watching during the holidays? Thanks for the inspiration!!

Hey Alexis -- that's great! Let me double check the title. It's about the Vence chapel. Also, PBS has a really good documentary about Dr. Barnes, btw.

It's "A Model for Matisse"

Thanks! Checking it out now.

This does look like a rather good facility, which is a relief after all the brouhaha of the moving of the collection from its original residence, and in defiance of Barnes's wishes. Perhaps he would approve after all.

Columnist -- yes. And another perspective is that his wishes really centered on the hang. So his core vision has been upheld (as I understand it, with the exception of Matisse's Joy of Life, which previously hung in a stairwell, each piece is just as he arranged it). Also, his educational outreach goals are finally being realized. Would be fascinating to see his reaction to the building!

I visited the museum shortly after it opened. I had never been to the original but Bob had -he said the spirit is intact. I was amazed really -it feels like a modern museum wrapping an older 'egg' of sorts and works really well. The collection is of course amazing, but the way he laid it out is even more so. Have you seen the documentary about the move? really interesting -definitely check it out.

Stefan -- Always love to get your perspective as an architect and traveler! The PBS documentary I watched after I did this post :) Waited on purpose and I totally agree -- it's excellent. Really a must see!

Back in the 70's, my husband and I were lucky to be able to visit the original Barnes Museum. I remember that it was difficult to get reservations, and the hours that the museum was open was very limited. I also remember that it was the only museum (and I have been to big and small museums all over the world) that we felt that we weren't really wanted there. When we asked one of the staff members why there were so many decorative iron pieces around these fabulous paintings which we felt were very distracting, we got a very disdainful look and was told "that is the way Dr. Barnes wanted it". And that was that.

Anonymous -- thanks so much for letting us know how it felt to visit the Merion campus. If you ever visit the new location, please share your impressions -- I know the unorthodox ensembles will be the same, but it's interesting to hear visitor reactions regarding atmosphere, accessibility etc. Sounds like your 70s experience was an adventure :)

I visited the original and I loved it. I have not been to the new museum. I do not even know if I want to go. I loved the old one so much. It looks like they kept the gallery installations intact, but for me, the rest of the museum is not in keeping with Barnes wishes. The original was a warm and welcoming house. This looks very much like it has the feel of a modern museum, and that the architects were allowed to put their imprint on it. I respect them as architects, but I feel that his aesthetic and his museum should have been left as it was. It was amazing to walk through beautiful rooms of furniture and tools and Renoirs and Picassos next to an artist that he liked that never quite made history. And to do it in the context of the scale of that absolutely wonderful building. I do understand that they have kept the wall arrangements, but once you add high ceilings and juxtapose a modern aesthetic it just kills the experience. It is no longer the Gesamtkunstwerk. Being in his museum helped you to understand his time and his aesthetic, and the aesthetic of Picasso and other artists of that time who were inspired by tools, and invented collage, a time when modernism was warmer and more colorful, earthier. Encasing it in modern coldness just makes it look freakish and quaint somehow. I understand that this makes a lot of great art more accessible to the public and that is a good thing, but I can't help but feel sad about it. I wish they had taken his building apart and moved it into the museum in total like the Temple of Dendur at the Met. Very sad. The Barnes was one of a kind. Mr Barnes museum was well worth the reservation. Having said that, I hope a lot of people get to see his wonderful collection and enjoy it. For me, the wonder was in was the total experience of his house and the artwork, and every creak of the old wooden floors. :)

Your post gives a great impression this fascinating new building. I love the attention to detail in the architecture, and the mixture between faithfulness to the original Barnes vision and playful innovation. It seems to be a good example of how to keep heritage alive.

Dandy -- I'm glad you raised these issues. (Small hidden gem vs. accessible city museum.) You've really encapsulated another perspective that was at the heart of the debate about the move.

Interestingly, in the book the architects spend a great deal of time discussing scale. In the end the new galleries were kept more intimate than originally discussed because, I think, they felt altering the size would be like "enlarging a face without changing the size of the eyes, mouth, etc." And they used a great deal of wood (floors included ), stone and metal to deviate from the typical white box modernist building.

Your thoughts prompted me to return to the section on scale. Thanks again for such a well thought out comment. Always appreciate those!

Oh and Stefan's impression of a modernist structure wrapping an older "egg" seems to capture the new place well.

Emile -- yes, absolutely, "keeping heritage alive," sustaining the educational mission and the collection itself was ultimately what prompted the change.

Although the new building appears to be well-thought out, clearly the whole experience was a major consideration of Mr. Barnes and that is lost. Despite the various other successes of the whole project, I feel this was not the best solution. It will be interesting how we all feel 10 years from now, however.

Move the Frick into The Met...what's the point! Barnes designed a JEWEL, coveted by others for decades, whereupon with the help of a school endowed with the Greatest Impressionistic collection ever put together...they broke a DREAM to give it to another, so in 10 years...Dr. Barnes will be forgotten, and a new name Foundation shimmers!

Lets close the Huntington Gardens and Library to move the collection to LACMA...lets close The Nissim de Camondo in Paris and dump it all in a new gallery of the Louvre...