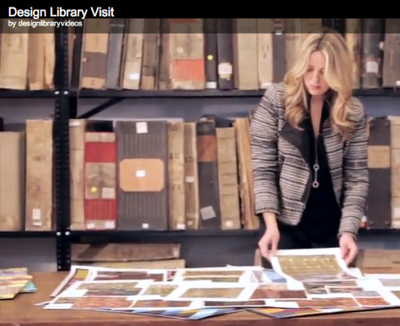 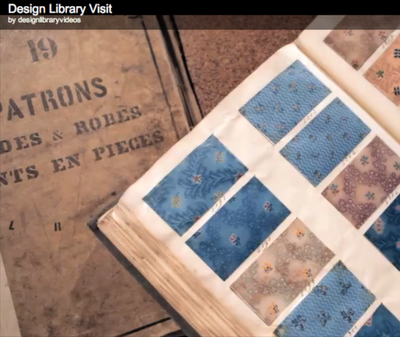 [Screengrabs from The Design Library video]

The Design Library, an incredible repository in the Hudson River Valley with what is believed to be the world's largest textile archive, recently acquired a major trove from Cheney Brothers Silks.

Based in Connecticut for more than a century, Cheney Bros. was the first successful silk manufacturer in the U.S. According to TDL, this new acquisition encompasses thousands of samples of Cheney's jacquard production plus early European textiles from the Parisian Holzach Collection. (Over the years, Cheney bought numerous old French fabrics for reference.) 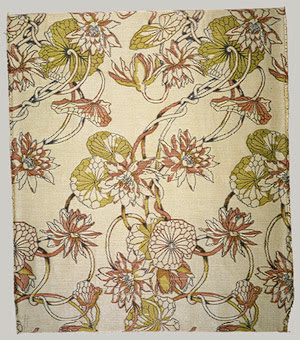 The Met served as another source of inspiration for Cheney and the Museum also holds in its collection examples of the manufacturers' silks. The one above caught my eye. It was designed by the woman-run firm of another design pioneer, Candace Wheeler. According to the Museum, this "shadow silk" generated major buzz in the design press when it was first seen in 1885.
Posted by Style Court at 7:18 PM

Great post! Don't know if you know this, but Cheney brothers was the largest velvet manufacturer at one point as well with family ties to weaving in Italy. The legacy remains in American Silk Mills, a jacquard weaver based in Pennsylvania. They also produce magnificent silk product, import velvet from Italy and create product for all the top jobbers and furniture manufacturers. I have been lucky enough to buy fabrics from them in a past life.

Although I only mentioned Candace Wheeler in my October post on Louis Comfort Tiffany, she was a great contributor to the design profession as we know it today. Despite not being well known now, unfortunately, she has sometimes been referred to as the Mother of Interior Design. Thanks for spreading the word, Courtney.

TDC -- Absolutely. Wheeler is overlooked. I think Adam Lewis did a good thing by including her in The Great Lady Decorators but Wharton seems to be remembered more often. People have no idea what Wheeler accomplished.

Lori -- thank you! And thanks for the extra info. Appreciate it.