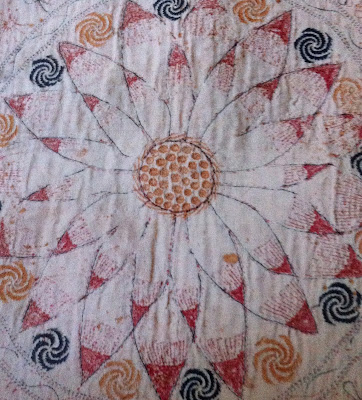 [Detail view: Central lotus motif on an extraordinary 19th century kantha from the Stella Kramrisch Collection at the PMA. Below, full view.] 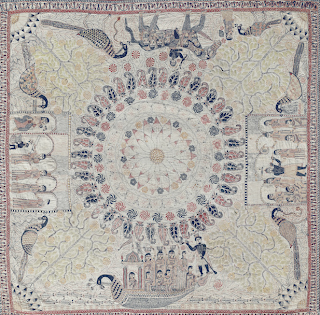 She may not be a household name outside the museum realm, but Stella Kramrisch's life is screenplay-worthy. She's best known as a pioneering professor, curator and collector of Indian art -- particularly the once lesser-appreciated "folk" and regional pieces, like exquisitely embroidered kanthas from Bengal. 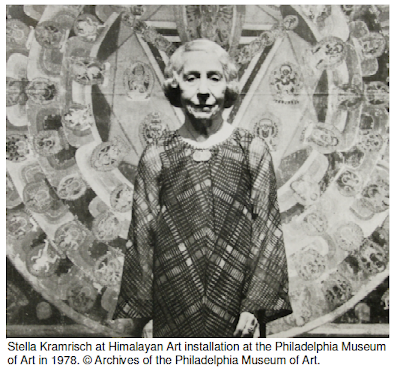 [Image via the Courtauld.]

Born in Moravia in 1896, young Kramrisch's first foray into the arts was with classical ballet; the attraction to Indian culture began at a local Viennese museum when an artifact caught her eye.

At sixteen she entered the University of Vienna, saw Gustav Klimt at his zenith, soaked up everything she could about modern art, and eventually earned her doctorate.

During the 1920s she traveled alone to India, became the first female faculty member hired by the University of Calcutta, and the first person formally trained in Art History to teach in India. 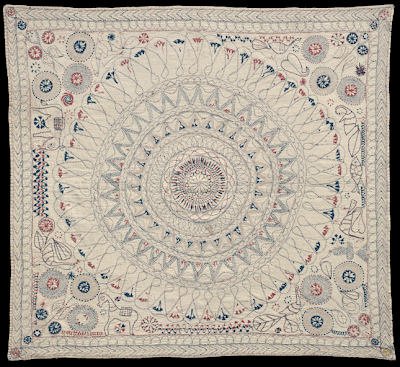 [19th century kantha from the Stella Kramrisch Collection at the PMA.]

Decades later, as a widow, she left India for the States. In 1954, she became the Philadelphia Museum of Art's first curator of Indian Art. Kramrisch remained with the museum until her death at age 97, completely changing perceptions of Indian painting, sculpture, and textiles along the way. The exhibitions she organized were landmark events.

Whether in her renovated farmhouse or city apartment, she was said to have flair to spare, mixing those colorful kanthas and other objects with neoclassical English antiques.

India awarded her one of its highest civil honors, the Padma Bhushan. And to the PMA she bequeathed her massive collection, solidifying the museum's strength in the area of South Asian art. 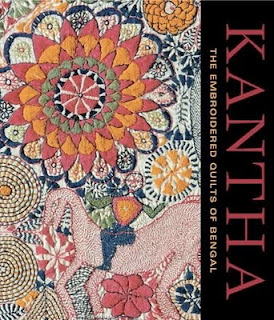 Again, the podcast really brings these textiles to life.
Posted by Style Court at 2:43 PM

What an amazing woman - I want that as my alternative life! And don't you so wish you could see what her interiors looked like with that mix going on?