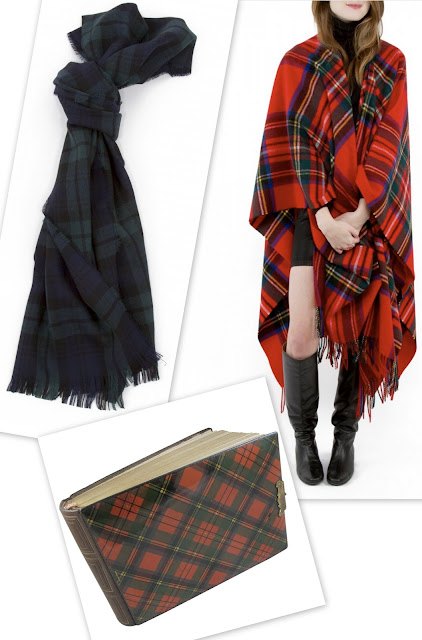 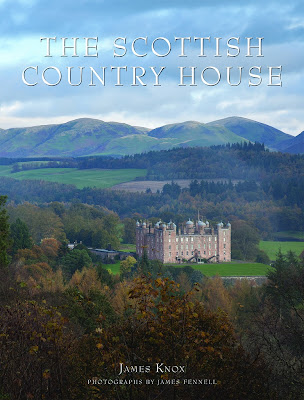 Last year my good friend Janet and her husband Joel traveled to Scotland. Although they were not there in December, some of their dispatches caused me to daydream about spending the holidays in a Scottish castle. 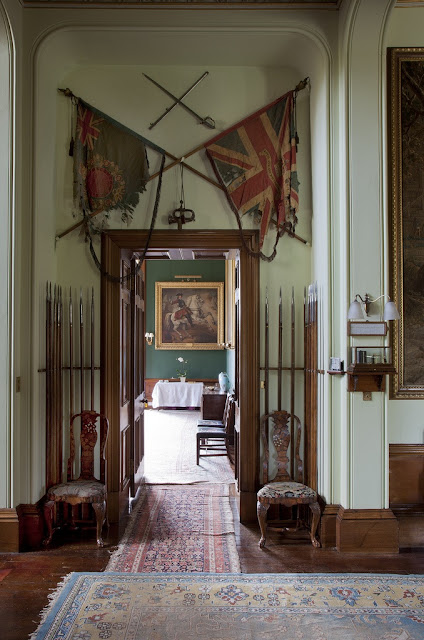 [Unless credited otherwise, all house-and-garden-related images in this post are by James Fennell
from The Scottish Country House courtesy Vendome Press 2012.] 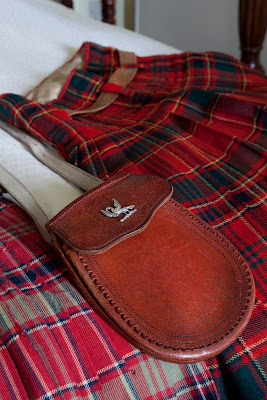 But then again, I do enjoy the balmier temps and blossoming camellias we have down here in Georgia. For now, maybe I'll just go around town running errands in a soft tartan scarf then come home to vicariously experience Scotland's ruggedly beautiful vistas and striking architecture with James Knox's The Scottish Country House. 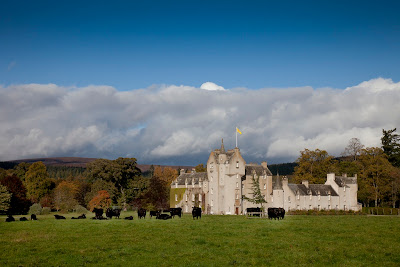 Knox collaborated with photographer James Fennell (remember his work from The Irish Country House?) who was determined to shoot only in natural light. 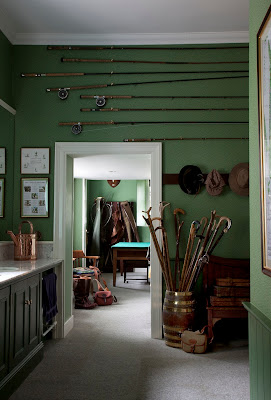 Together the men focused on ten sprawling houses, most of which have endured through centuries of political change -- not to mention shifts in fashion. And much like the houses highlighted in Irish, nearly all of the stylistically varied Scottish places Knox writes about are still lived in by descendants of the original builders (or at least have stayed in the same family for generations). 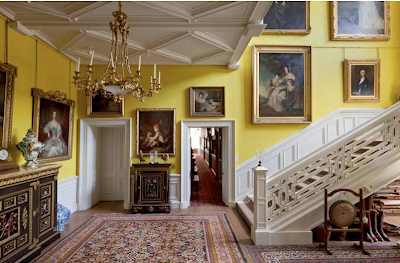 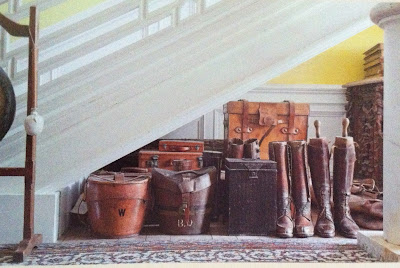 Shown directly above and below are glimpses of Bowhill. Knox tells us what we need to know about architect William Burn's Victorian modifications to the Regency-era house, including the double-height saloon which sets off the Mortlake tapestries (part of a stellar decorative arts collection) But he also shares this tidbit: "The doorbell at Bowhill is an intercom bearing a small, worn, white sticker inscribed 'Their Graces' in ballpoint pen," effectively underscoring the informal grandeur of the Buccleuch family's home. 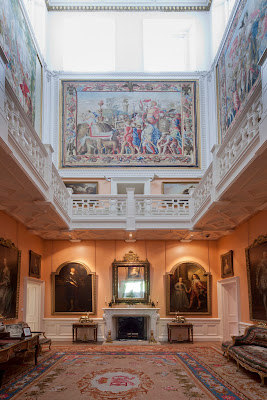 Dumfries House, designed by the hugely influential 18th century classical architects, the Adam Brothers, is the one house in the book no longer inhabited by original owners. Thanks in large part to Margaret Russell, design enthusiasts the world over are aware of HRH Prince Charles' successful efforts to preserve Dumfries for Scotland and subsequently, believes Knox, to bring real economic hope to its struggling surrounding town, Cumnock.

Devotees of Adam and Chippendale will appreciate how Fennell captures this recently restored estate. Although not pictured in this post, significant space in the book is devoted to Dumfries. 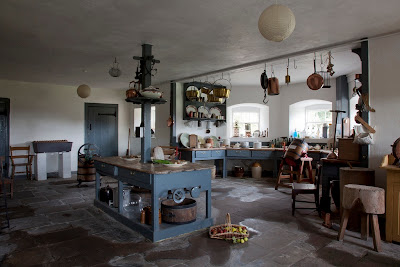 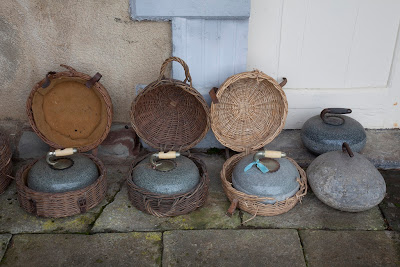 Upstairs, downstairs, under the stairs and outside -- the ten big old houses are seen from different angles. 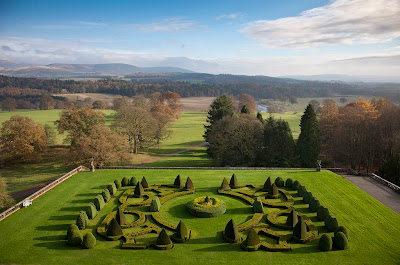 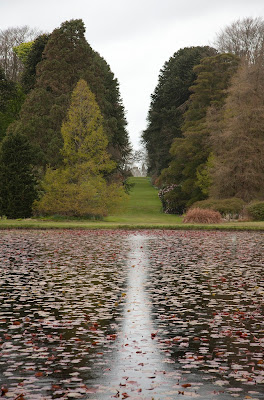 Most years I have fun playing around with gift pairings. Knox's generously-scaled book would really be a substantial present on its own, but if some sort of "add-on" is in order, there are plenty of possibilities from extravagant to modest. In fact, it's hard to stop thinking of them. Any sort of cozy Scottish wool accessory is obvious. Other ideas include flea market Tartanware (the 19th-century album pictured at top is far more precious than what I had in mind but might inspire a little DIY project), homemade oat cakes (Janet's contribution), shortbread, a good bottle of whiskey (Scotch, of course), a couple of drinking glasses. or the exhibition catalogue for The Scottish Colourist Series: SJ Peploe. 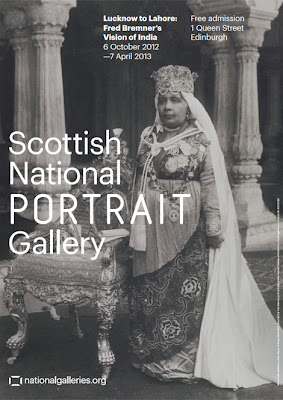 Btw, Scottish commercial photographer Fred Bremner's work from 1882 to 1922 -- his documentary photographs and portraiture in Imperial India -- is currently on view at the Scottish National Portrait Gallery through April 7, 2013 in Lucknow to Lahore. Probably because of the time I've spent admiring Indian textiles, furniture and silver, his images of Indian artisans seem particularly interesting. 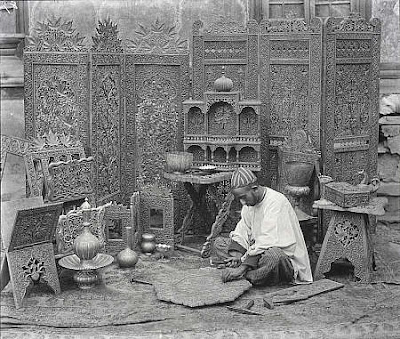 Thanks to Vendome Press for providing Fennell's images and a review copy of Knox's book to help me pull this post together.
Posted by Style Court at 9:41 AM

Olivia -- Knox goes into detail with each house, too. If you get a chance to flip through it in a book store, let me know what you think.

Wonderful post! I dream of Christmas in Scotland too - my mother was born in Glasgow and her last wish was to have her ashes scattered on the Clyde in 2005 - I have been a couple of times, but, it is a magical place. I was hooked on the BBC series 'Monarch of the Glen' mostly for the scenery at first - Highlands with a country house - the house is available to stay in so its on my bucket list. My great aunt just passed away in Sept. - she was 106 and lived in Perth, Scotland most of her life. Thanks for the lovely post! ;-))

Sarah -- wow, sounds like you have wonderful ties with the place. I'm so glad you shared. I need to checkout the BBC series and google that house. Thanks for mentioning those too. Hope you will soon be able to cross a stay off your bucket list!

And of interest to Chinese wallpaper obsessives like myself is that the Burn renovation of Bowhill in the 1830s included a Boudoir for the Duchess of Buccleugh decorated with Chinese wallpaper (birds and flowering trees on a white ground), another example of the surprising popularity of chinoiserie in the late Regency and early Victorian period.

Emile -- the room is captured beautifully by Fennell!

I almost went in a different direction with this post and included it. The chinoiserie mirror is really something too :)

Thanks as always for your observations.