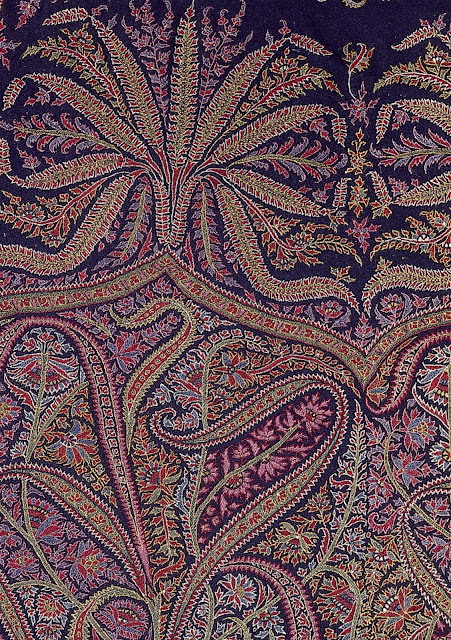 This psychedelic paisley pattern was embroidered with silk threads on woven goat hair in Kashmir. It was made specifically for the Western market -- for a man to wear -- and it's a great example of how the boteh motif (a cone-like botanical) really went wild during the mid-19th century. So wonderfully overgrown, in fact, that the elongated and exaggerated forms obscure the ground color. The profuse, brilliant pattern also foreshadows that quintessential 20th-century menswear accessory: the silk paisley tie.

I came across the textile in one of my all-time favorites from the V & A Pattern Series -- Indian Florals by Rosemary Crill. But new titles are on the horizon. 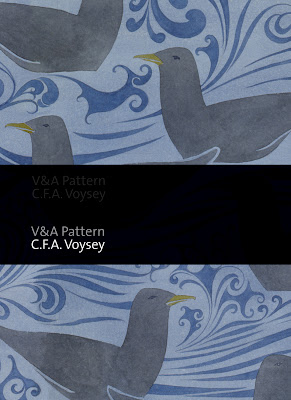 C. F. A. Voysey is scheduled to be released next year. Especially known for using stylized birds, animals, flowers and trees in silhouette, textile designer Voysey began his career as an architect. He was a major force in late-19th century design, with clients including the manufacturers Liberty and  G. P. & J. Baker. BTW, the V & A's adaptations of his Deer in the Forest, 1918, and Bird and Holly, circa 1897, are available again this season as holiday cards and wrap in the museum gift shop.
Posted by Style Court at 9:36 AM

I'm shocked. I am very familiar with Voysey's work (we have numerous books on him in the office which we reference often) but I had no idea he went into textile design! You learn something new everyday so I guess I'm done today!

Stefan, it's funny, after I hit the publish button I noticed that the V & A has an upcoming talk about Voysey's architectural work:

Don't know if you have any travel plans involving London but it's in December :)

December 13 during the day.