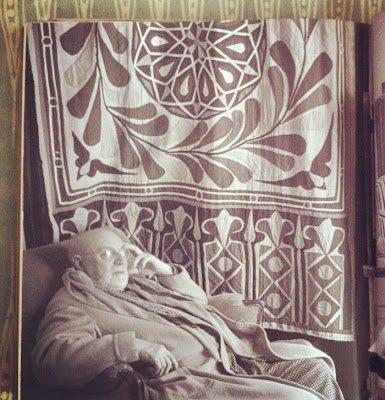 [Photo my own: Matisse circa 1943 captured in his studio by Henri Cartier-Bresson. Behind the artist is his large-scale 19th-century Egyptian appliqued cotton hanging. This image and the Egyptian piece are both included in Matisse: His Art and His Textiles: The Fabric of Dreams.] 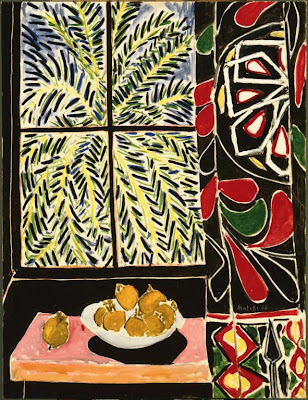 For The Met's upcoming show, Matisse: In Search of True Painting, The Phillips Collection in Washington, D.C. is loaning one of the artist's seminal textile-related works from a later but brilliant phase of his long career, Interior with Egyptian Curtain. 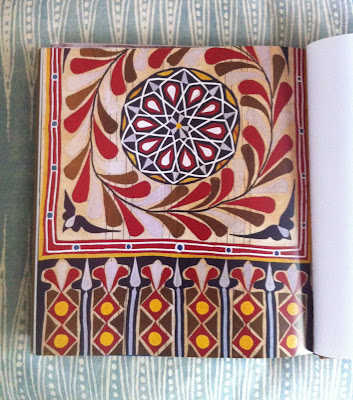 It's part of a series of three paintings he did of his Villa Le Rêve studio in Vence and the piece was published, along with Interior with Black Fern and Large Red Interior, in Verve, fall 1948. The Met was interested in highlighting the trio because the paintings show how Matisse repeatedly explored certain subjects and how he tended to favor pairs and/or series of three. Essentially, this exhibition will be about process -- the idea that for Matisse the creative journey was perhaps as important as the destination.

For Interior with Egyptian Curtain, he drew upon his own extensive textile collection, specifically the bold and colorful Middle Eastern appliquéd cotton pictured above. According to The Phillips, this painting could be considered his ne plus ultra (in this category of oils) and it's clear that the lively cut fabric on the Egyptian piece influenced his paper cutouts. 1948 was also the year he ventured further into abstraction with his work for the Dominican Chapel in Vence.

In all, 48 canvases will be on view in Matisse: In Search of True Painting, which opens at The Met December 4 and continues through March 17, 2013. 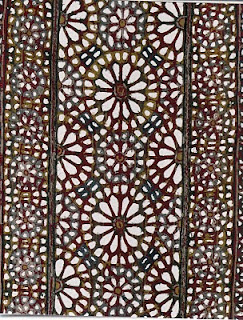 [Detail from a past post: late-19th-or-early-20th-century North African pierced and appliqued hanging. Colored cotton appliqued to sackcloth. Matisse, His Art and His Textiles.]

Past posts of interest: From Textile to Painting and Man of the Cloth.
Posted by Style Court at 2:08 PM

It's times like this that I hate being away from NY! That has always been one of my favorite Matisse paintings.

Jacqueline -- at least there's the catalogue :)