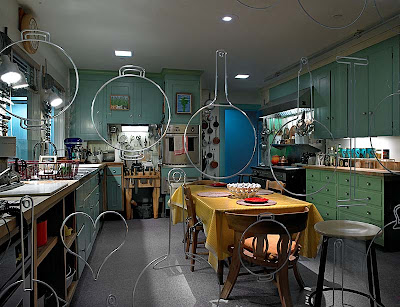 [Julia Child’s kitchen via The Smithsonian.] 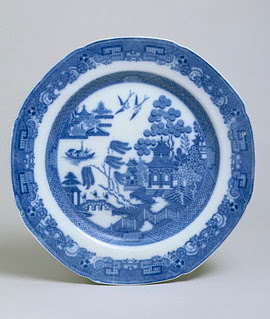 [Child, the American icon, loved French cuisine served on her English china with Chinese-inspired decoration. Image above is 19th-century Spode earthenware, transfer-printed in underglaze blue -- collection of the V & A.]

Those copper pots. The butcher block. Her Peg-Board, blue-green cabinets, Spode Blue Willow plates and collection of books. All of these elements plus the hundreds of tools, furnishings, assorted objects, Garland range and other appliances that comprised Julia Child’s no-frills kitchen will be on view in FOOD: Transforming the American Table 1950-2000, an exhibition opening November 20 at the Smithsonian's National Museum of American History in D.C.

As you probably know, back in 2001 Child gave the museum her entire kitchen -- the iconic East Coast one from her Cambridge, Massachusetts house. Later, when it appeared on screen in this 2009 movie, there was renewed interest in the idea of not-so-precious kitchens. (Seems to me her efficient Peg-Board wall in particular, with its simple yet graphic display of pots, generated a lot of blogosphere talk.) During the past year, conservators and museum volunteers have been dismantling Child's now very famous kitchen in preparation for its re-installation as the exhibition's opening story. The show will be the Smithsonian’s first major exploration of food, and Child will be highlighted as a serious force in the evolution of American food culture. Learn more here.
Posted by Style Court at 1:49 PM

It's blue willow over at my place today too...deconstructed though, not literal. And do I spy a little Brigitte Singh in the new header?

What a great idea, to preserve the kitchen of an iconic 20th-century American cook in this way. I wish Elizabeth David's kitchen had been kept in this way, perhaps in the Geffrye Museum or some such place.

Emile, now I have to google images of David's kitchen :) You've piqued my curiosity.

Found it! Found the pottery and provencial furniture. Thanks.