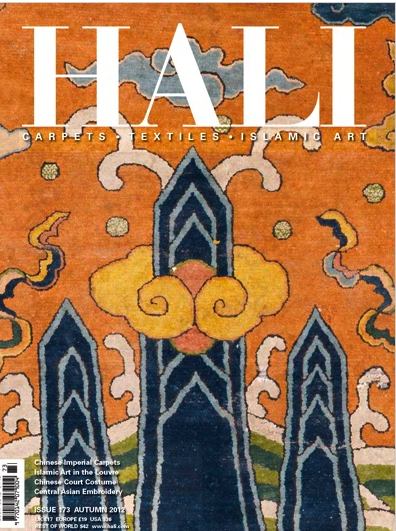 Last week, in my rush to help spread the word about Monique Lévi-Strauss' latest book, I neglected to mention that Hali's entire fall 2012 issue is a must see. Especially for fans of Chinese textiles. 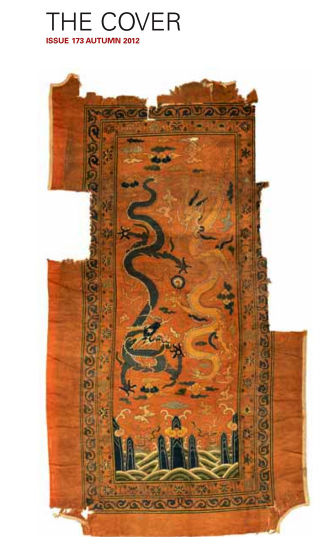 [From the collection of The Palace Museum, Beijing.]

The star that made the cover is this 16th-century late-Ming Imperial two-dragon carpet. It's scale is palatial -- nearly 35 feet by 20 feet -- and, according to Michael Franses, echoes the design of the monumental carved stone pathways along the Imperial Way. There are several related articles in the magazine, offering extensive coverage of Chinese rugs and court robes. 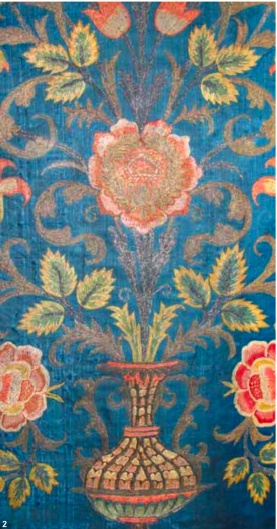 There's also a peek inside the Blue Drawing Room at Wildenfels Castle. Used only for celebrations, reports Christian Erber, the room is lined not with German wallpaper or Western European fabric but metallic-thread-embroidered silk Ottoman panels that were likely acquired in the 1740s. The detail, above, shows iconic Turkish tulips and roses spilling out of rounded vases. To see the whole installation, and learn about textile conservator Roxana Naumann's restoration, check out the new issue.
Posted by Style Court at 8:09 AM