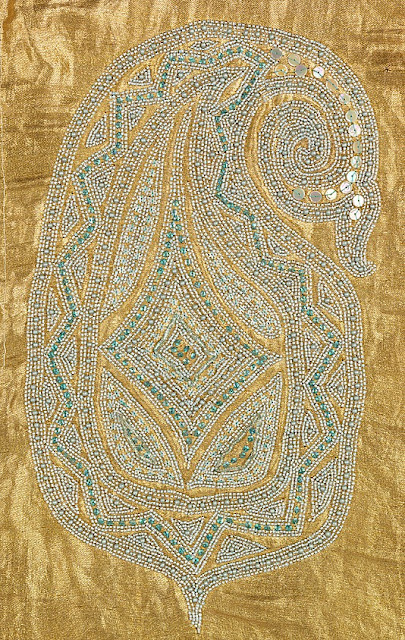 I've been taking advantage of MetPublications, a new online feature that gives visitors free access to the Museum's books and journals -- roughly 650 titles so far. Many out-of-print catalogues can be read cover to cover while other books are available in preview form. Orientalism: Visions of the East in Western Dress, a Met catalogue from 1994, grabbed my attention first.

In the chapter on India, Harold Koda and Richard Martin describe how Europeans snaked the boteh motif (aka paisley). Embraced it so tightly, in fact, that by the 20th century the pattern was perceived as an iconic British menswear look. I'm definitely partial to the menswear interpretations, too. But searching through The Met's collections, I found some ultra-feminine examples not included in the book.

Above is Sarah Lipska's beaded and embroidered, vaguely modernist take on a boteh from the 1920s. According to the Museum, Lipska once worked with Ballets Russes set and costume designer, Leon Bakst. This piece, along with a silk metallic boteh-covered bag by Lanvin, typifies the Roaring Twenties vogue for all things "exotic."

BTW, a few great Ralph Lauren pieces from the 90s are included in Orientalism's chapters on Southeast Asia and the Near East.
Posted by Style Court at 4:44 PM