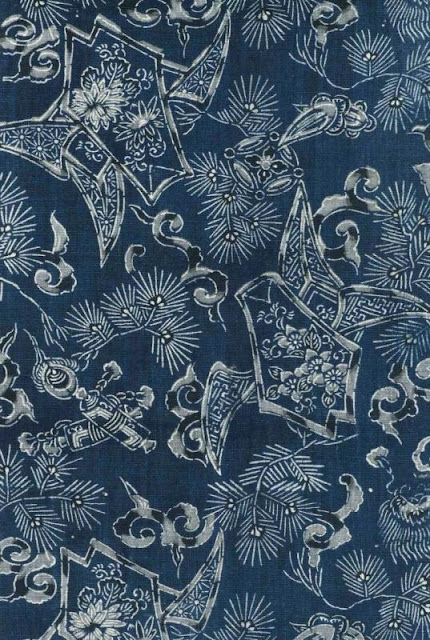 [Image via RugRabbit; details below.]

The Meiji-era Japanese textiles in this post come from opposite ends of a spectrum, from homespun dyed cotton to intricately embroidered silk. I'll start with the more modest (but, to me, equally appealing) example: a late 19th-century katazome cloth panel pictured above. It's categorized as katazome because a stencil with resist paste was used to create the decorative pattern. Essentially paste prevented indigo dye from penetrating areas not meant to be blue. 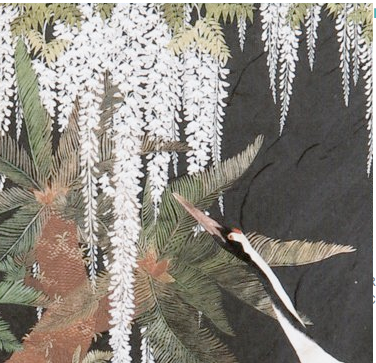 Shown next is a detail from a lavish silk hanging in the Ashmolean collection. This one features embroidered cranes, cycads and wistera. 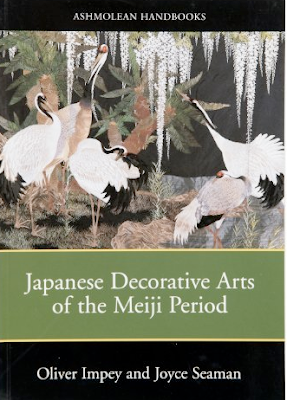 Here's a wider view on the cover of the Museum's catalogue of Meiji period decorative arts. Later this fall, the Ashmolean will present Threads Of Silk and Gold: Ornamental Textiles From Meiji Japan. 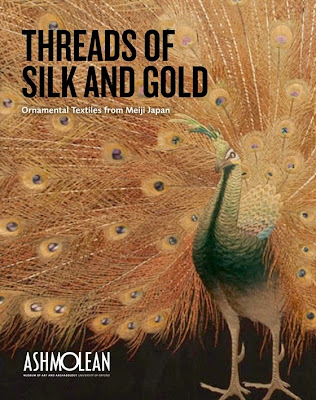 A time of rapid modernization, the Meiji Restoration (1868-1912) opened doors between the West and Japan. Decorative textiles made by Japanese craftspeople for the Western market will be the focus of the Ashmolean show. And this exhibition will be the first, outside of Japan, exclusively focused on the art of Meiji textiles. Included will be roughly forty of the world's finest Meiji velvets, tapestries, dyed silks and embroideries (pieces drawn from from the Kiyomizu-Sannenzaka Museum in Kyoto and the Ashmolean's own holdings). Since today many of us in the West tend to be more familiar with the Japanese kimono, the show is expected to be an eye-opener.

BTW, the peacock on the cover of the exhibition catalogue -- I think it's a detail from a larger hanging -- would've been so at home in a Victorian living room; a great example of how Japanese artisans reinterpreted Eastern designs to suit Western tastes. You can peek inside the book here. Or, take a look back at some japonisme here.
Posted by Style Court at 3:50 PM