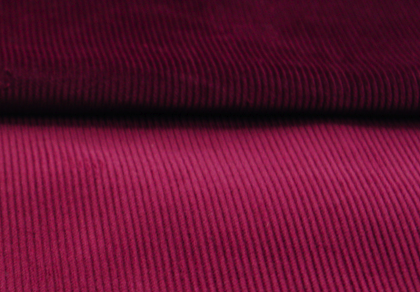 [B & J sells cotton corduroy in an array of colors.]

According to Brooks Brothers and other sources, Corduroy Appreciation Day doesn't take place until November 11 (note how well the date works out, visually: 11/11) but I already said I wanted to start celebrating menswear fabrics in September. 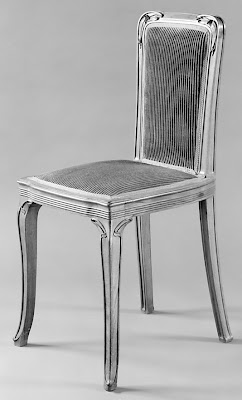 In my mind, you can't beat menswear translated for interiors. A circa 1899 French chair by Georges de Feure wasn't what I was originally thinking for a corduroy post, but this interesting Art Nouveau-influenced piece, with corduroy upholstery, belongs to The Met and, coincidentally, it came from Edward C. Moore, Jr., son of the collector/designer mentioned in the previous post. Since the image here is black-and-white, you can imagine the corduroy to be whatever color you like best. 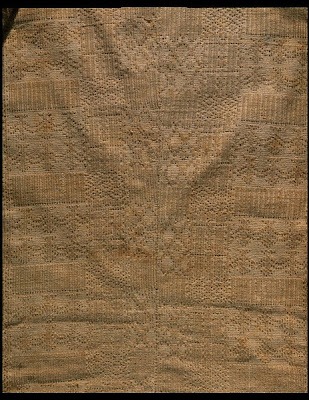 Contrasting with the straightforward wales we're used to, this much older piece (the back of a man's mid-18th-century waistcoat belonging to the V & A) has "wales of light brown cotton woven in a decorative pattern, imitating that of silk velvet," according to the museum. Curators are uncertain whether the light brown cotton corduroy was woven in England or France. To paraphrase the V & A: Lancashire, one possibility, was a major hub of cotton weaving at the time, and English weavers in London (Spitalfields, to be exact) often produced textiles based on French designs for silk, but when the waistcoat was made French weavers in Rouen were trying their hand at cotton, too. 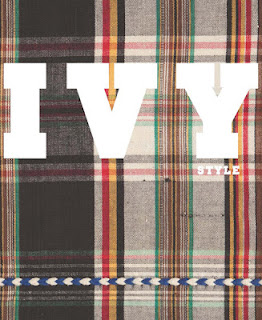 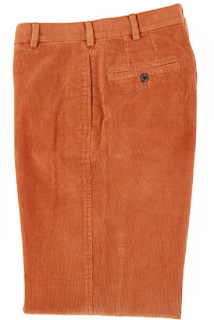 So, like the French chair, the intricately detailed antique corduroy is far from the Ivy Style pieces that put me on the menswear wavelength. Still, it's one for the get-to-know corduroy file.

If you've seen the latest WoI you will have noticed corduroy used by Jaime Parlardé as upholstery for a sofa. I've not seen it as upholstery since the 1960s when it was very popular.

I love the idea of men's suiting used as the basis for a room - something I've been interested in for a long time. The suit I bought yesterday at Brooks Brothers could be the starting point for a very soothing but not stuffy room.

What do you think of shocking pink linen for living room curtains?

Blue -- shocking pink contrasted with men's suiting fabrics? Sort of like a bold pink tie or pink linen shirt worn with a gray flannel suit? I can see you making it work!

I've got the Sept. WoI, no Oct. yet. Need to flip back through it. I do think I spotted a rust cord -- or maybe it was something else -- on a sofa in front of Zuber paper. The Castaing-inspired flat. In the 70s, I think, my mom covered a camelback sofa in rusty corduroy. I'm thinking Betsy Burnham is a cord upholstery fan too :)

It's the October issue - a thick issue and the first article is about Jaime Parlade's house in Spain.

Great -- thanks so much.

Blue -- meant to add thanks for drawing it to my attention. Once you mentioned WoI, I started doing a mental review of corduroy sofas.

Latching on to Blue's comment, I can remember an article in a late 1980s edition of Architectural Digest or US House & Garden with a feature on the Paris home of Mme Pompidou, wife of the late President, and she had corduroy-covered sofas in a beautiful caramel colour, which in that eighties era seemed very much a relic from a previous period, but also very chic.

By pure coincidence (?), the corduroy trousers I am wearing today are almost that same shade of caramel - a Manchurian candidate (or Zoolander!) moment? :)

Emile -- very cool coincidence. I love how you can work Mme Pompidou and Zoolander into one comment, and on a Monday morning no less.