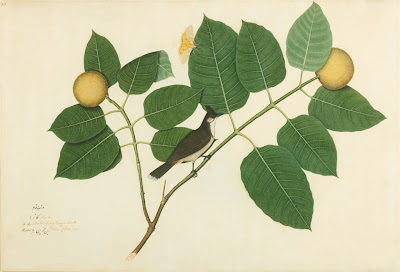 First we had adventurer/artist Mark Catesby's tercentennial (actually the biggest celebration takes place in early November), then there's Victorian poet/artist Edward Lear's bicentennial exhibition, a show which opened just days ago at the Ashmolean, and today I became aware of yet another avian-related happening: Lady Impey’s Bird Paintings, also at the Ashmolean beginning October 16.

Lady Impey (Mary) and her husband Chief Justice Sir Elijah Impey were among the wave of English men and women who arrived in Calcutta during the 18th century. Both apparently became enthralled with the flora and fauna of India, even creating their own private menagerie. Since cameras would not arrive on the scene until much later in the next century, the Impeys and their set commissioned Indian artists to document their new, awe-inspiring surroundings. Lady Mary in particular was a great patron. And Sotheby's says her art collection -- eventually encompassing well over 300 drawings, nearly 200 of which featured birds -- was among the very best.

According to the V & A, she and her husband employed three Indian artists to paint their birds, plants, and animals. But most of the large-scale pieces in the Ashmolean show will be the work of acclaimed Patna-born Shaikh Zain ud-Din. Stylistically, he referenced his background in Mughal painting as well as European approaches.