End of Summer Show and Tell 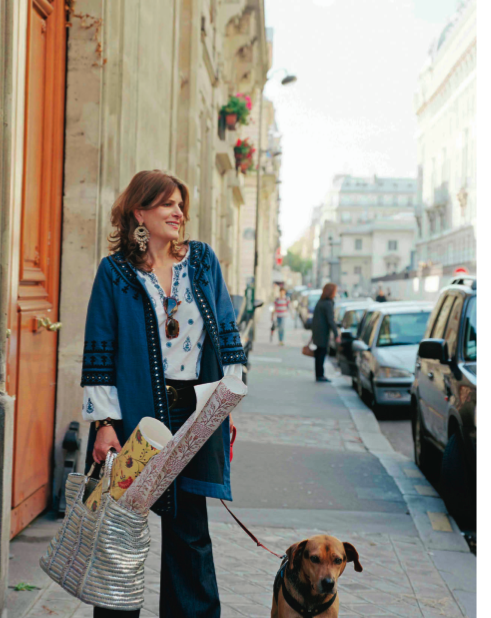 Over the summer the closest I came to a far-flung locale was when my name appeared adjacent to a picture of the Chowmahalla Palace on a page in Ultra Travel (thanks to textile designer Lisa Fine). From a personal perspective, it was very moving to be included among Lisa's likes and recommendations but I think for everyone else her other favorites -- destinations, memories, last book read -- will really be of interest. Her soulful responses go beyond standard lifestyle fare. Check it out here. 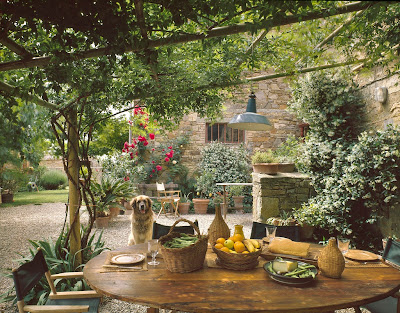 [Image above and all photos of rustic Italian life, below, are by Massimo Listri from his book At Home in Italy: Under the Summer Sun. The images are posted with permission from Vendome Press.]

Usually when I want to feel as if I'm vacationing at an artist's rural house in Italy, I watch Bernardo Bertolucci's gorgeously sun-dappled Stealing Beauty. Since the late 90s, I've rented it nearly every summer. (Like Amy Merrick, I can't get too much of the wildflowers, long ethereal dresses, and architecture.) Although, this season almost slipped by without the annual viewing. I think I got my Italian fix from photographer Massimo Listri's At Home in Italy: Under the Summer Sun. 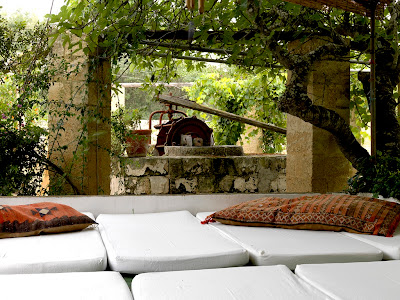 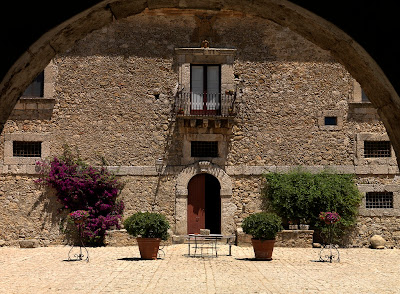 Listri took his time, shooting traditional old dwellings from the mountains to the sea. Some are grand, others are humble. All have some sort of enduring rustic beauty and convey the appeal of Italian country style. 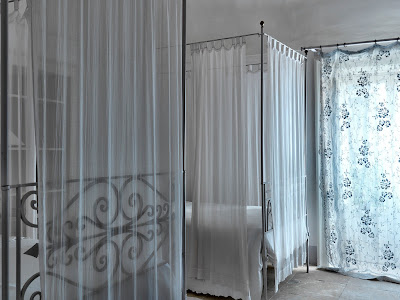 What strikes me about the interiors is that they're not really datable. In some cases modern art lets us know we're in the 20th or 21st century, but the rooms never scream a specific decade. 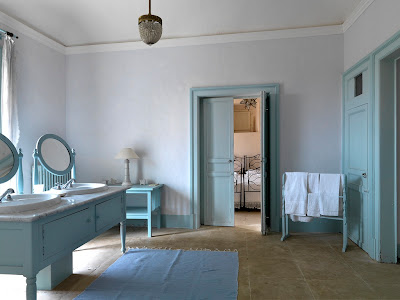 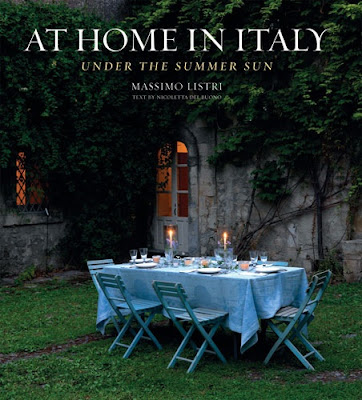 Over in the UK, the edgier side of the 19th century is once again coming into focus with Tate's exhibition, Pre-Raphaelites: Victorian Avant-Garde. And that makes me think jewel tones, which brings me to Addison Weeks, the new venture of Turq Jewelry founders Lee Addison Lesley and Katherine Weeks Mulford. 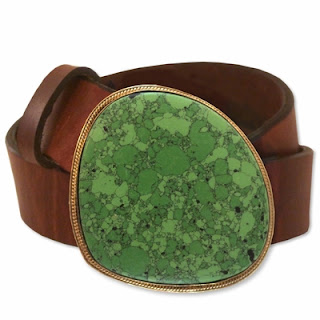 Kat and Lee are wonderful colorists. For fall they're mixing their signature semi-precious stones with brass to create interchangeable belt buckles and brooches. 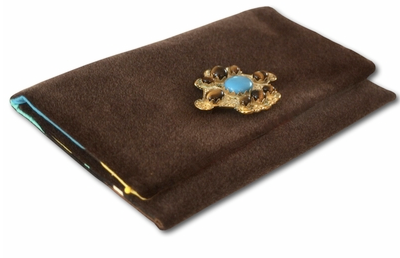 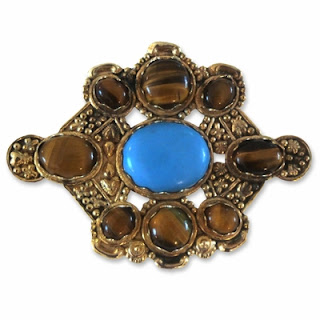 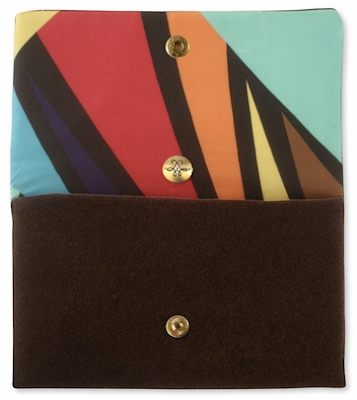 When I first spied the brown velvet bag, I imagined it working for the opening of the Nureyev show as well as with laid back Imogene + Willie.

Together Lee and Kat handpainted graphic compositions and then had the designs printed on silk. These appear inside the bags but are also available as scarves. The brooches have pins and bales so they can be worn traditionally, on a blouse or on the clutch, or hanging from a chain. 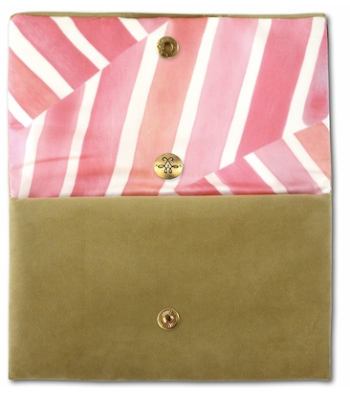 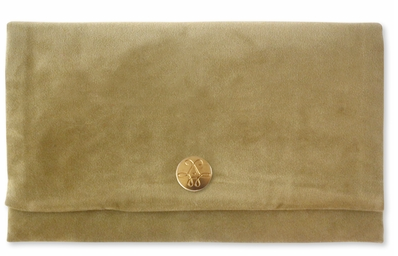 See all of the bags, belts, scarves and 2012 season jewelry here. 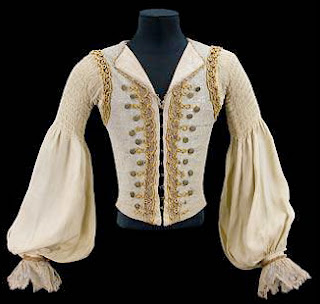 BTW, the exhibition catalogue accompanying Rudolf Nureyev: A Life in Dance is now available at the de Young shop. On September 6, Muriel Maffre will be at the Museum to present The History of Ballet: From Louis XIV to Nureyev. More on the dancer's relationship with textiles here.

In other Museum news, Contemporary Ömie Bark Cloth, a small-scale exhibition of textiles crafted and painted exclusively by women in the Oro province of Papua New Guinea, opens at the de Young October 6.
Posted by Style Court at 5:57 PM

I absolutely love Italy...will definitely be adding this book to the collection. So much inspiration! Thanks for sharing!

Thank you for the introduction to that book, seems like a wonderful one to add to the collection of coffee table books.

And thanks for pdf of that piece in Ultra Travel. I think it's wonderful that your blog was mentioned, also well deserved. I'm very inspired by that piece and would love to read the book that Lisa Fine just read.

Thanks, Lisa! Weren't the places, objects, dogs, and clothes she described intriguing?

Jamie -- I think you'll definitely appreciate this book, then!

Loved this post! There is something so luxurious about reading a proper book on a travel - and enjoyed the other ultratravel answers, too.

And with hopping from a film, set in Italy, to a coffee table book, via a few exhibitions to Nureyev's dancing costumes - that is a wonderful journey.

Elsbeth -- so glad! I did hop around! Maybe to stick with the traveling theme, I should've added that the Nureyev show will be in San Fran. And I guess everyone already is well aware of this but Imogene + Willie is headquartered in Nashville; Addison Weeks in North Carolina :)

Enjoy the end of summer!

I've got my Addison Weeks order in- so excited about their new line. Wonderful profile and post Courtney!