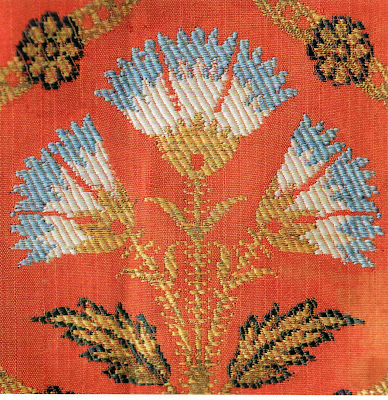 [Above, a detail from a silk cover with metallic-wrapped threads. Believed to be 18th century North Indian. Collection of The Textile Museum and included in The Sultan's Garden: The Blossoming of Ottoman Art. Full view below.] 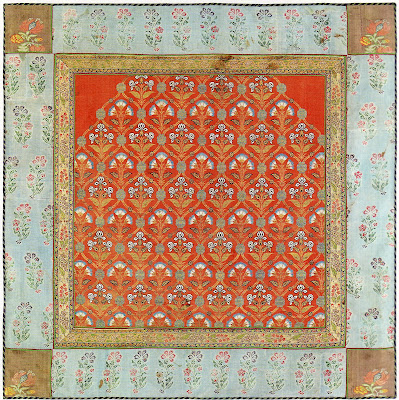 I'm still fixated on the carnations. 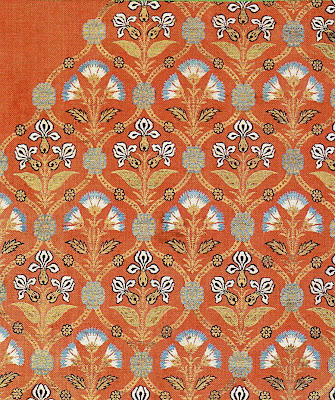 Since Ottoman-style carnations were so eye-catching and distinctive, says The Sultan's Garden curator Sumru Krody, they were among the most mimicked or adapted motifs around the world. This silk cover is thought to be Indian, possibly comprised of Mughal and Persian textiles sewn together. Interestingly, in the vivid orange field you can see the highly stylized carnations contrasted with naturalistic irises. And there are even more carnations in the wide sky-blue border; hyacinth sprays are highlighted within the thinner interior border.

In the past we've talked about English designers (contemporary and avant-garde Victorian) who gravitated toward old Ottoman textiles. Similarly, I think fans of Spanish-born Mariano Fortuny's fabrics will really appreciate this upcoming exhibition because his designs were frequently inspired by Ottoman art. And the show explores the connection between Ottoman design and Russian textiles, as well as the aesthetic interplay between 15th century Italians, Ottoman court artists and the Chinese. So that brings me to today's book suggestions: 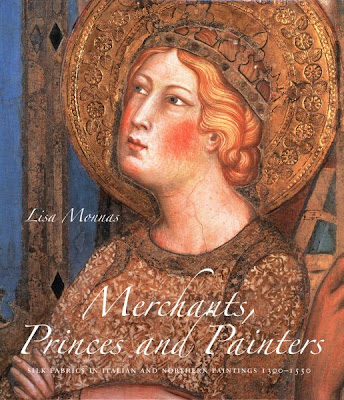 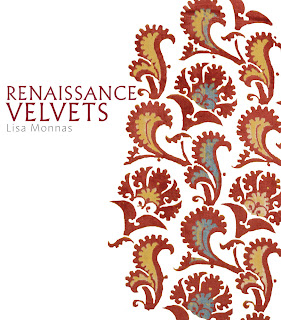 Renaissance Velvets, a soon-to-be-released V & A book, also written by Monnas and distributed in the U.S. by Abrams.
Posted by Style Court at 3:59 PM