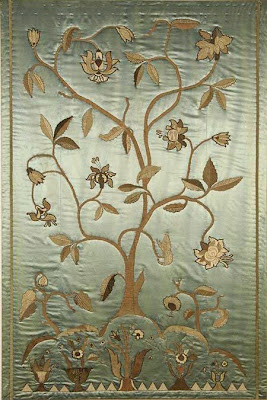 [Photo by David Franzen for the DDFIA.]

Last month Doris Duke's Shangri La launched a new series of video clips featuring art historians and conservators along with their favorite pieces from Duke's collection. I'm hoping the embroidered Indian satin, pictured above, will eventually make an appearance. It's late 19th or early 20th century, was done with silk metallic threads, measures roughly 96 by 64 inches, and is a reminder of her two-month adventure through India in the 1930s, part of a honeymoon world tour. 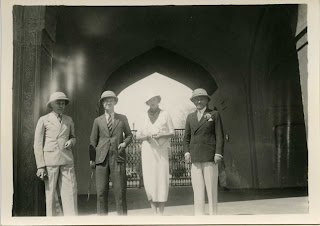 [Doris Duke with architect F.B. Blomfield and assistants at the Red Fort in Delhi, India, 1935,
via the Rubenstein Library at Duke University. ]

Also, the Foundation has published online Thalia Kennedy's research about Duke's meeting with Ghandi and how that may have fueled her passion for Indian craft. It's illustrated with Duke's scrapbook pages and renderings related to the Mughal-inspired bedroom and bathroom she ultimately commissioned.