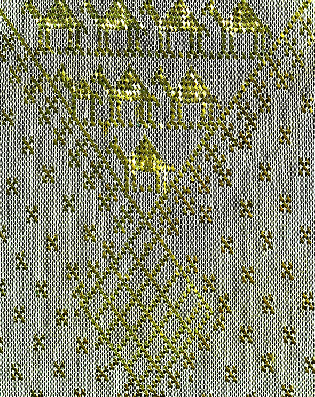 [Detail view via the Lacis Museum.]

Wow. During the past few days we've seen some stunning examples of needlework. The Queen has sparkled in coats stitched with metallic thread (I love that Vogue made a connection with The Ditchley Portrait of Elizabeth I), artist Ann Carrington's embroidered red banner made its way along the Thames on Sunday, and then this morning there was the Duchess of Cambridge's lace dress. So I thought this afternoon's Textile of the Day should be intricately worked with a bit of shimmer.

This example is from a Lacis Museum exhibition, The Asuit Cloth, previously mentioned on my Tumblr page. According to the museum, most scholars believe the textile originated in Egypt, where it is described as "net of metal," and it is in fact made by incorporating thin metal strips into tulle. In the Roaring 20s, when all things Egyptian were in fashion in the West, Asuit shawls had their moment in the sun. Learn more about the show, as well as summer needlework classes offered at the San Francisco center, here.
Posted by Style Court at 3:47 PM