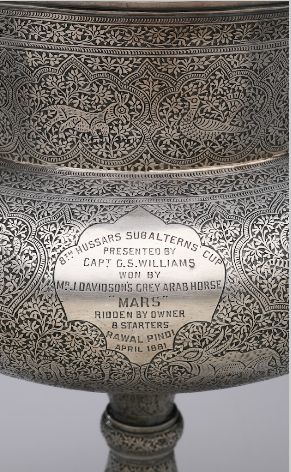 [Detail of a silver presentation trophy made in Kashmir, circa 1881. Image via Delight in Design.]

Just about a week remains until Indian Silver for the Raj opens at the Virginia Museum of Fine Arts on Saturday, July 7. With some of the Anglo-Indian silver posted here earlier, you may have noticed how richly-patterned the objects are, much like India's iconic textiles. As we continue the shimmer and shine countdown, I thought it would be interesting to look at other unmistakably textile-esque pieces. (It's the ornamentation that really reflects an Indian sensibility.)

Wares crafted in Kashmir during the colonial era are characterized by all-over scrolling leaves, "paisley," and flowers including poppies and coriander. When I saw the fab, late-19th-century trophy, pictured at top, I immediately thought of densely-patterned Victorian shawls as well as a few contemporary fabrics. 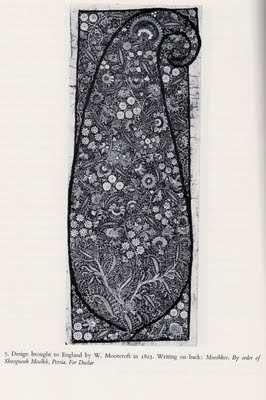 [Old design from  V & A curator John Irwin's The Kashmir Shawl published in the early 1970s.] 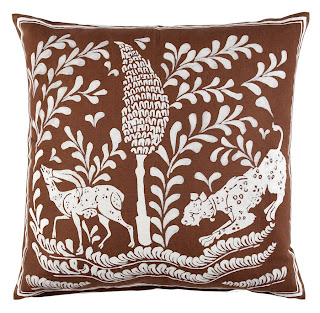 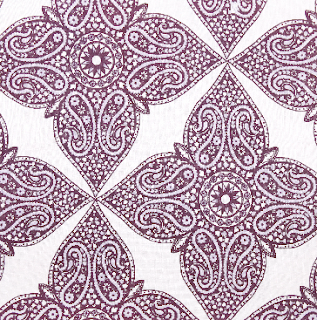 The silver wine carafe with stylized serpent handle, below, is profusely decorated with delicate Kashmiri blossoms and is another stunning example of what will be on view in the VMFA's upcoming show. 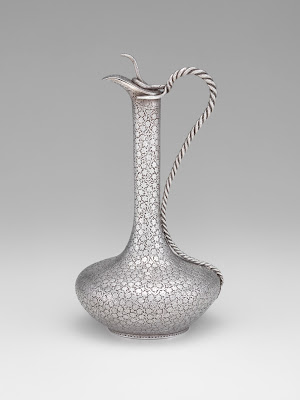 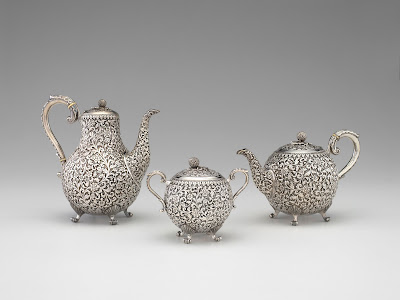 Kutch was famous for compact florals embossed in high relief and for master silversmith Oomersee Mawjee. Liberty of London chose to sell Kutch silver, so it's not surprising that wares from this region inspired Western-made copies. 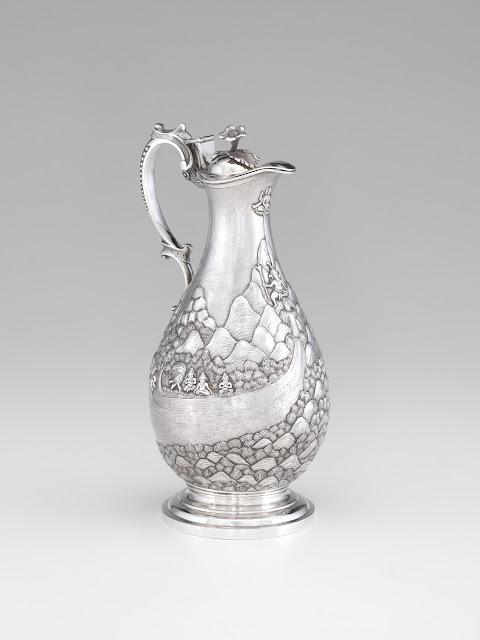 Narrative scenes were more likely to come from Calcutta -- especially depictions of rural life -- and craftsmen here may have been inspired by the work of British photographers. But, I think, the way the landscape has been interpreted on the water jug, above, like a repeating pattern, also suggests Indian textiles.

More Silver for the Raj to come.
Posted by Style Court at 9:57 PM

Courtney, you are killing me with these posts. Having held tons of equivalent period Chinese and Japanese export silver in my hands, I have never had access to the comparable period in Indian silver! And I have no time for a road trip! :-) Jacqueline

Wow. I live in Richmond, and didn't know about this--I guess I haven't been paying attention!

For those of you thinking about coming to see this: the VMFA has a fairly substantial silver collection, mostly English.

And now with the VMFA's big Anglo-Indian silver acquisition, an even stronger decorative arts collection :)

Jacqueline, Anon, hope you have a chance to check it out!

It is so very lovely. I like very much Kutch. Tea Service, ca.1884,silver. The pillows are lovely as well.I am very fond of Ehrman Tapestry, I cannot afford them but I like to peruse their catalog and website (www.ehrmantapestry.com

The silver show made me grab my old Christie's catalog on Important Silver, objects of Vertu and Russian Works of Art. Has some similar pots etc.

Thank you for sharing.

Thank you, once again, for a lovely post. Another motif that is common in Kashmiri textiles and arts is the chinar leaf (oriental plane). You can see it on the silver bowl on the VMFA catalog cover.
Rina

Lovely - like you mention, there is a definite similarity in the patterns here and on Indian block printed textiles - the paisley, the stylized blossoms. Glad to have stumbled upon your blog.