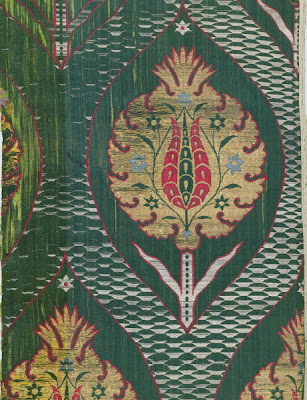 [Fragment from The Textile Museum collection given by Neutrogena Corporation;
details follow below.]

Throughout the summer I'll be sporadically highlighting pieces from that special upcoming show, The Sultan's Garden: The Blossoming of Ottoman Art, set to open September 21 at The Textile Museum in D.C. We've already touched on the exhibition here and here, but today I wanted to add that curators have gathered together 58 works, encompassing silks, velvets, ceramics, rugs and other furnishings as well as horse adornments and costumes, to show how the Ottoman court used stylized flowers to...well, in 21st-century speak, to visually "brand" itself. Those iconic tulips (just to name one blossom) became as recognizable as Nike's Swoosh, and still inspire new textile designs today. Shown above is a detail of an early-17th-century fragment of green-ground kemha (brocade) from Istanbul.

The colorful, 192-page companion catalogue should prove to be a must-have for the textile junkie's shelves. More on the book to come.
Posted by Style Court at 7:12 PM