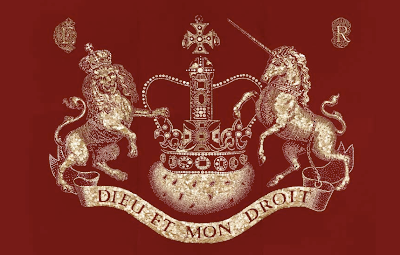 [Images one and two via Ann Carrington's site]

On Sunday, June 3, when all the cameras are focused on the Royal Barge as it travels along the Thames, I hope we see some nice close views of artist Ann Carrington's brilliant red, embroidered banner at the craft's stern. According to Colefax and Fowler's site, the iconic British fabric house donated to the project well over a hundred yards of Cardinal Red velvet, and Carrington incorporated into her design over half a million buttons. 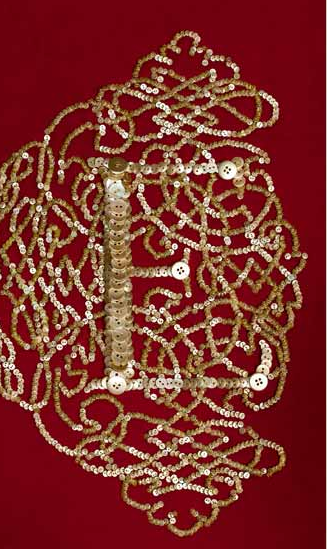 The design is her own take on the Royal Coat of Arms with St. Edward's Crown, aka the Coronation Crown, placed between the lion and the unicorn (Carrington received permission from the College of Arms to do this special Jubilee year interpretation). She has also referenced each Coronation from 1066 to 1952, around the banner's border. Her inspiration to use buttons came from London's Pearly Kings and Queens. 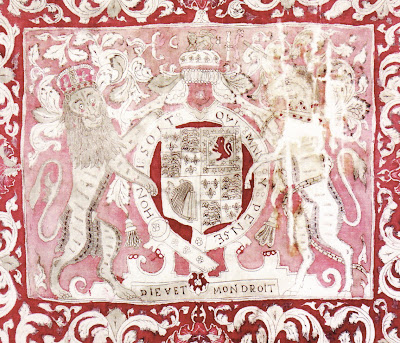 The other day, flipping through Rosemary Crill's book, Chintz, I spotted another great version of the crest (the Royal Stuart Arms) worked into a 17th-century Indian export cotton. The Chinese- and Indian-related imagery in the cloth's surrounding field includes elephants, birds, and flowers. 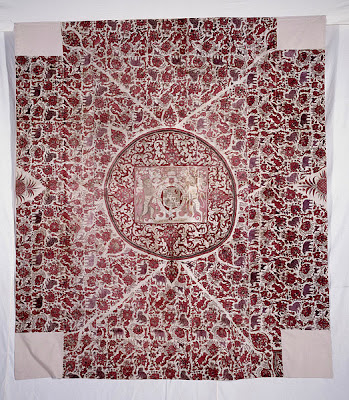 [Images three through five from Chintz and the V & A] 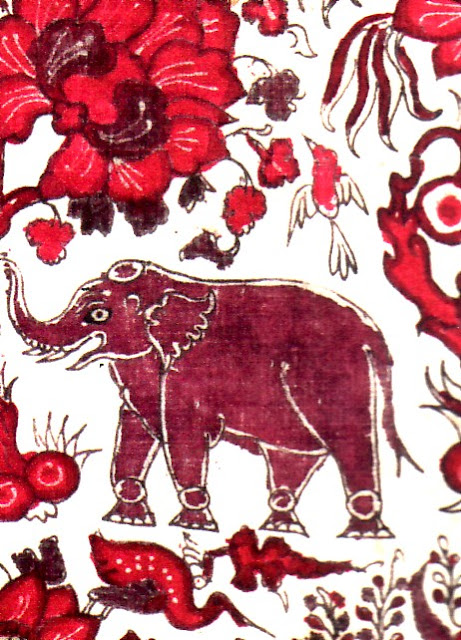 BTW: Prints available from Carrington include The Royal Jubilee Banner and Pearly Queen of Jubilee Gardens.
Posted by Style Court at 12:11 PM

I saw the Royal Barge moored at Richmond a few weeks ago when I passed through on my way to Ham House, and it looked fabulous, very eighteenth-century, but in a good way :)

Emile, seeing it in person must have been wonderful! The attention to detail I've seen in news reports is really remarkable.

Style Court is so innovative and aesthetic-Ly clean. I mean it inspires us all. Thank you.

Oh wow! What amazing workmanship on the banner ~ I love seeing the detail image!

What a thrill...Sixty years how amazing the queen is and how thrilling it is to be able to celebrate her Diamond Jubilee from anywhere we live via t.v., internet or radio.

This post is so lovely thanks for sharing this incredible detail.

Ideezine -- yes, so cool that we can all see the pageant, wherever we are. I'll probably check out both BBC America and the Royal YouTube channel. Glad you liked this post!

Two of my favorite things: deep red and buttons! And I agree that the handwork was stunning.

HBD -- There are some great images of the buttons over on Ann's site :)