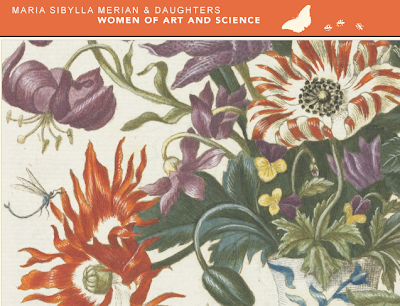 [From the Getty's 2008 exhibition site: Maria Sibylla Merian & Daughters: Women of Art and Science. Pictured above is a detail view of Merian's circa 1680 hand-colored engraving in The New Book of Flowers, Trustees of the Natural History Museum, London. Full view shown below.] 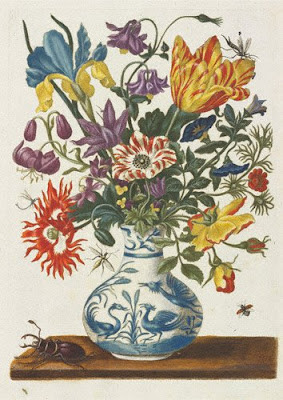 I thought I'd come up with a nice Mother's Day present for the nature-loving mom: the exhibition catalogue from the Getty's show, Maria Sibylla Merian & Daughters. Turns out, though, that the book is becoming a bit harder to track down. (I am finding used copies online.) Merian was one of my 2008 Adventurous Spirits. A German-born artist from a family of creative publishers, she led a remarkable life as an independent single mother living and working with her daughters in 17th century Europe, and later, Suriname. 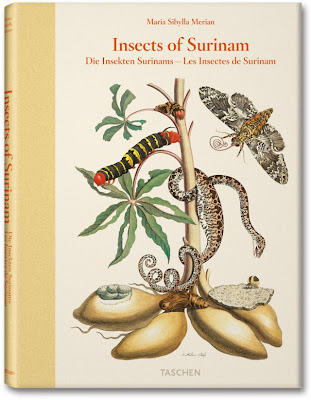 Her books of flower paintings were frequently used as field guides of sorts by embroiderers and cabinetmakers, but Merian is also credited with advancing science, specifically the study of insects, through her meticulous illustrations. As the exhibition title conveys, her daughters were artists, too, and they all collaborated professionally.

Check out the Getty's audio-enhanced slideshow, still online, here. In 2009, Taschen released a lush volume of Merian's Entomology work; this book is easier to find.

What an inspiring post! The Taschen volume will be the perfect gift for my botanist mother, who also has a history in entomology as well as a love of Audubon-type natural history engravings. The fact that Maria worked with her daughters makes the volume that much more appropriate for Mother's Day! Thank you for your never-failing insight and grace that you share on your blog!

Bridget -- thanks! I hope your mom loves it.

I have a thing for insects, so the last volume is intriguing.