Family Matters: The Queen and Some Architecture 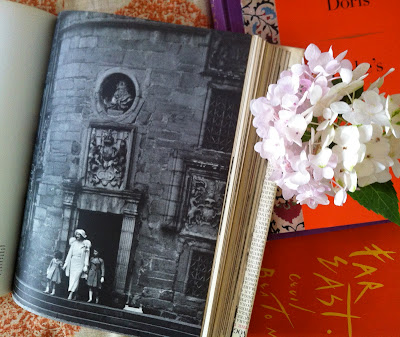 Between the incredible range of portraits currently on view in The Queen Art & Image (Britain's National Portrait Gallery) and the photographs included in Queen Elizabeth II by Cecil Beaton (the V & A), I now have a much better sense of how documented Her Majesty's entire life has been.

Not surprisingly, when Vogue's editors put together the first edition of The World in Vogue, published in 1963, they highlighted several images of Elizabeth II while other 20th-century icons were represented only once. If you flip through a vintage copy today, you'll find four pages devoted to her Coronation but what jumped out at me is the editors' other pick: this Central Press photo of a young Princess Elizabeth with her mother and her sister, Princess Margaret (far left), on the steps at Glamis Castle, the Queen Mother's ancestral home (and also Margaret's birthplace). Contrasted with the trio's polished, feminine coats, the exterior of the storm-braving Scottish castle -- the setting for Shakespeare's Macbeth -- looks so rugged. Over the centuries, Glamis has undergone extensive architectural changes to suit the tastes of various generations. 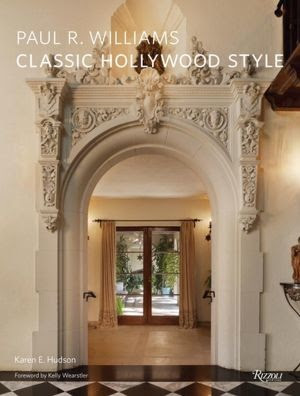 Of course, the work of Los Angeles-based 20th-century architect Paul R. Williams was often informed by the grand old houses of Great Britain and France. (BTW, I think the Duke and Duchess of Cambridge spent time in a Williams-designed Georgian when they were supporting TUSK last year.) In the past, I've mentioned Williams' granddaughter Karen Hudson's earlier book about his astonishing career. Now, as you probably know, she has written another, the recently published Paul R. Williams: Classic Hollywood Style and she'll be speaking to designers at 11 a.m. on June 6 at the Pacific Design Center. Details here.
Posted by Style Court at 2:34 PM

I look forward to taking a look at the Williams book. I have the previous one, also by Rizzoli, so it will be interesting to see why there is a second book rather than a revised, improved edition of the first.

One update is the contemporary photography, which gives a sense of how his houses are lived in today. You can sneak a peek over at Rizzoli's page. And, I think, Hudson had more to address with the skyrocketing interest in his work since the first book was published.

You had me at architecture...
I look forward to the Williams book -and it's still my dream to get a copy of the original Vogue book!

Stefan -- I'd love to read your thoughts on both!

This is excellent news, Courtney. I can't wait to see the new edition of the Paul Williams book.

I remembered--vaguely, a long time ago, during a previous online life as "Magnaverde"--writing a post on somebody's blog about the time that, twenty-five years ago, at an estate sale in Peoria, I came across a pile of 50-year-old professional photos of a spectacular 1930s house that, a few years later, I discovered was designed for the radio Actor Charles Correll by Paul Williams, an architect whose name meant absolutely nothing to me. The house was one of the largest of William's career, but in the days before the internet, information on Williams' work was hard to come by. At least, in Peoria.

A few years after that, though, I read in The New Yorker that Karen Hudson was doing a book on her grandfather's work, so I sent her my photos, many of which she didn't have. Unfortunately, they got there too late to make it into her book, and the Correll house wasn't very well represented in the first book. I'm hoping that this edition will address that, especially since it's supposed to be about Williams' houses as venues for entertaining, and the best of the photos I found showed exactly that: a cocktail party in the Correll's sleek Moderne playroom, with glossy Venetian blinds, plump banquettes, blocky geometric lamps & a bar whose slick glamour was set off by an attractive brunette with drink in hand. That one photo seemed to sum up all the heady glamour of the years just before the war--at least, if you had lots of money--and my only regeret is that I didn't make a copy of it before I gave it away. Maybe it will be in the book.

But here's the ironic thing: once again, I'm hearing the news about a Williams book too late to do any good, because last year, I came across a few more photos from that original set, which somehow managed to get separated from the others in my files. That's the great part about being a bit disorganized--you can make exciting discoveries in the comfort of your own home. Oh, well. I guess I'll have to wait for the third edition.

At any rate, that old blog post about all this that I said I wrote? All I had to to find it was Google the words Williams, Peoria & Magnaverde and it popped right up--right here, at Style Court, back in 2008. Small world.

It's heartening that you're still here, when so many others of my then-favorite blogs are just a memory. Thanks.

Oh, and the Queen's party? That's nice too. I hope she has a good time.

Such a small world. Your description of the Correll playroom is fantastic.

You always have had some fascinating backstory to share and we all appreciate your vivid, informative comments. What a nice surprise to hear from you. Let me know your thoughts, when you've seen Hudson's latest book.

I LOVE Paul Williams' work and did a paper on him for a class in design school. That is when I discovered that he had to learn to draw his designs upside down as he had to sit across from white clients - he couldn't sit next to them to go over his ideas and drawings. I thought this was astonishing as well as his prolific career and accolades for a black man who was told he would never be an architect. I wanted Karen Hudson's book but it was out of my budget!! Thanks for the post and I wish I could go to the PDC for the lecture.

Sarah -- Williams' ability to draw upside down amazed me, too. And his perseverance.

Hope eventually you can add both books to your design library!