A Still Life and Another Textile Resource 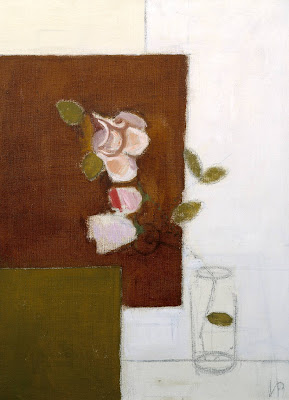 [Roses in a Jar, 1947, by Victor Pasmore. From Tate's collection.]
Some recent posts over at tumblr warrant a few brief comments here. First, one of Britain's leading 20th-century artists, Victor Pasmore: Roses in a Jar may not be as familiar to audiences as his later pure abstraction, but it's a wonderful example of his transition away from figurative work in the 1940s. I found a nicely detailed catalogue entry about Pasmore's mid-to-late 40s still life painting at Tate, and, if you're in the UK, there are roughly three weeks left to catch Victor Pasmore: Transformations at The University of Manchester's Whitworth Art Gallery.

On the textile front, Cotton: Global Threads, another Whitworth exhibition, also closes mid-May. Did you know that the Whitworth has an internationally-respected wallpaper collection comprised of several thousand examples representing the 17th century to the present? Additionally, the gallery owns silk dyer Thomas Whardle's pattern books (1700 pages! Two examples posted here). Whardle's name popped up a while back in a Liberty post, too; Arthur Liberty's collaboration with Wardle in Leek, Staffordshire, resulted in the first Liberty Art Fabrics. And Whardle sold to Heal's as well. A wealth of info about Whardle, his designers, and his company is online at the bottom of the page here.
Posted by Style Court at 8:02 PM

I LOVE your tumblr, wish I could leave comments there. INSPIRED as always CB!

Hope you have fun just getting lost in the pics and clicks :)

So lovely...You are such a gifted individual. I love to visit your blog. It always makes me smile and want to read more. ~mss

Maureen -- reading your comment makes me smile. Thank you!