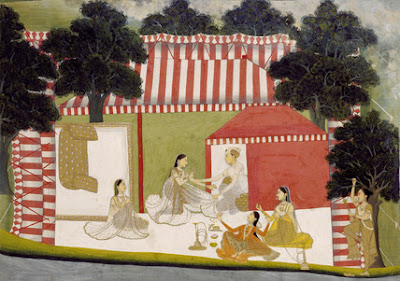 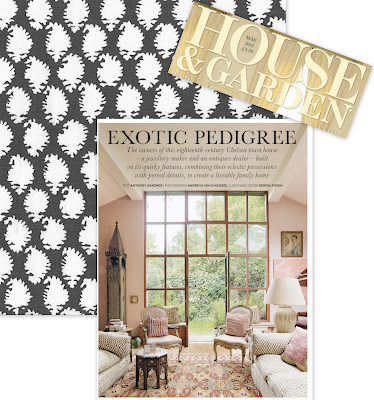 Today, it's another passage to India. Miguel Flores-Vianna, knowing my weakness for Indian textiles, furniture, and art, recently encouraged me to look at the May issue of House & Garden, UK. I'm so glad he did. Featured among the pages is the London house jewelry maker/artist Charlotte di Carcaci shares with her husband Alexander, an antiques dealer, and their three children. 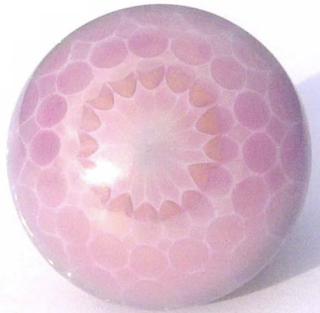 As writer Anthony Gardner explains in the H & G story, there's a former artist's studio (once Sir Henry Tonks's, to be exact) in the couple's back garden. In the di Carcacis' hands, it has become a welcoming Indian-influenced sitting room filled with John Stefanidis's boteh patterned fabric, Jaisilmir, old Indian miniatures, and a huge 19th-century portrait of the Maharana of Udaipur. So, with anticipation building for the Virginia debut of Maharaja in May, I wanted to quickly draw attention to the re-imagined garden studio.

I've pulled together some related objects from the V & A, the Stefanidis print, and a purposely small image of the sitting room (don't want to spoil your experience of seeing the house firsthand in the new issue). 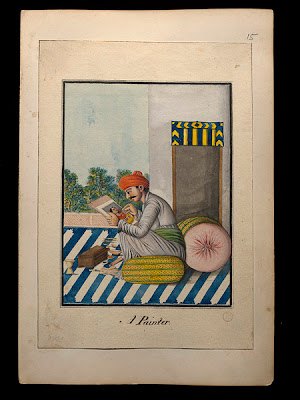 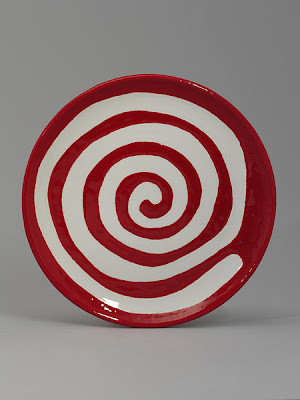 [Mid-century earthenware plate with enameled decoration designed by Teddy Millington-Drake;
made in Rome by Pinna Franca. V & A collection.]

What I think you'll appreciate about the rooms is the delicious and complex mix: a richly-patterned Kashmiri desk; a very Downton Abbey-Season-Three 1920s family portrait; and a variety of works by Brit artist Teddy Millington-Drake (Alexander's uncle). There are large abstracts and a bounty of bold ceramics like the plate, above, from the V & A's collection.

BTW, Anna Jackson, Keeper of the Asian Department for the V & A and the Lead Curator of Maharaja, will be in Richmond at the VMFA on Thursday, May 24 to present The World of the Maharaja at 6:30 pm. The talk is open to the public, admission is $8, and tickets are available online.  If I could be in Virginia that evening, I'd definitely be sitting in the theater.
Posted by Style Court at 9:41 PM

I am not sure I can live with only that tiny photo - its my kind of dream room - dying to see the whole space and not sure I can get the British issue here!

Jacqueline -- the house is very you. BTW, you can download the digital issue, for iPad or computer, via Zinio or app store :)