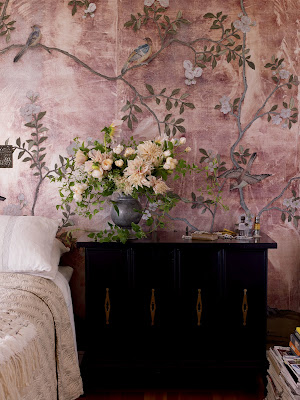 [All images in this post are ©Bringing Nature Home: Floral Arrangements Inspired by Nature, Rizzoli New York, 2012, and published at Style Court with permission from
the publisher and photographer.] 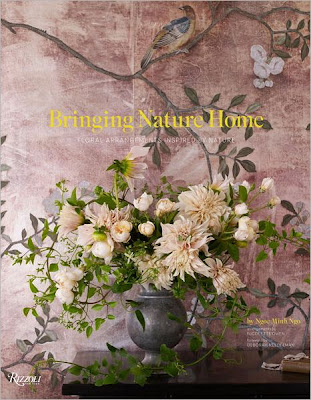 The draw wasn't Erica's fame as a Berkeley-based designer (in fact, you'll notice an absence of name-dropping in the book and find houses unidentified), but the feel of her family's un-decorated California digs. As Ngoc said, "Erica has amazing taste," and a very personal, very real home. After years of shooting interiors and still lifes for shelter magazines, Ngoc wanted to capture nature -- beautiful but not overly-labored arrangements of flowers, fruit, and foliage -- in expressive, art-filled homes she personally responded to (including her own apartment). 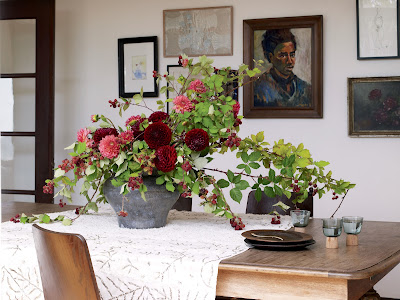 Some fans and design-junkies will recognize Erica's tarnished chinoiserie wallpaper, her paintings, and her flea market furniture, or notice several really inviting corners in author/editor Deborah Needleman's home, but most readers won't know specifically where the photography was done. 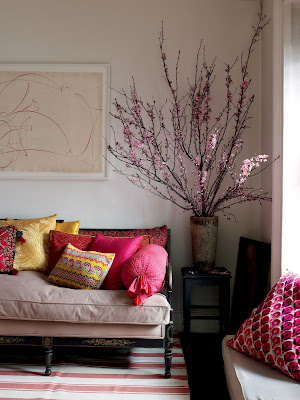 Like I said in my my teaser post, the focus is on enjoying seasonal flowers every day, in the here and now, rather than on design personalities. Nature is the star. The book convincingly makes the point that voluptuous arrangements aren't just for weddings, professional photo shoots, and occasional parties. 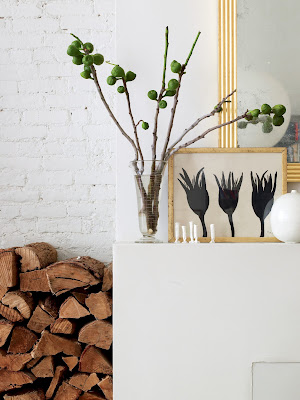 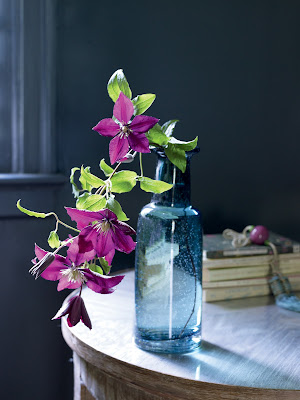 Skeptical? With Ngoc's and Nicolette's soft-spoken guidance, I'm learning that truly opening up to nature's full spectrum -- all sorts of readily available regional leaves, branches, and blooms -- instead of obsessing over only two or three favorites, helps make the fantasy a reality.

"Appreciate variety" isn't trite advice coming from Ngoc; it's a mindset at her core. The Vietnamese-born writer/photographer/gardener has lived on the East and West coasts of the U.S., in Italy, and in Paris. She first cultivated a passion for flowers observing her dad, a military man, working in his own small garden: "Watching him, I saw a side of [his personality] I'd never seen before," she recalled. 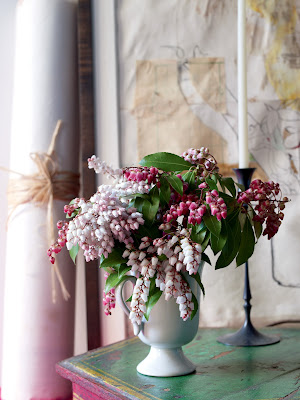 Although Ngoc studied at the Sorbonne, photography is something she learned on her own. When I asked about the painterly quality of many of her images, she explained that she'd done an art conservation stint in Italy. And she studied landscape design at Columbia University. "It all informs me." 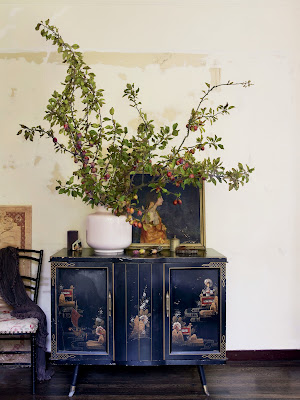 For Ngoc, flowers are more than decorative objects; they have a rich history and cultural significance, examples of which she weaves through her text. Living with foliage and flowers when they're in season, with rhododendron in spring, zinnias in summer, and andromeda in winter, connects us to the outside and to the rhythms of life. They're visual metaphors, she said.

An ultimate example of connecting interior and exterior, that stops-you-in-your-tracks gathering of Italian prune plums, directly above, was also photographed at Erica Tanov and Steven Emerson's house. Almost shrub-like, it seems fitting for a home surrounded by trees.
Posted by Style Court at 2:11 PM

How did I miss this one? I spy Alayne Patrick's home in Brooklyn, with some new throw pillows and the plum blossoms in the corner!
Love!

A whole new way of looking at flower arrangements!

These flower arrangements illustrate the truth (to me, anyway) that naturalness is the highest form of art. To make these arragements look so spontaneous and appropriate is a sign of profound skill.

...and that applies to the photographs as well as the flower arrangements, of course :)

An inspired pairing of two talented women. I remember the first time I saw some of Owen's bouquets in a magazine and realized immediately that they were composed of flowers that actually bloomed at the same time. A real rarity in the floral biz which is what makes this book such a treasure from the practical standpoint.

Gorgeous! What a wonderful interview. (I just ordered a copy of the book! Hurrah!).