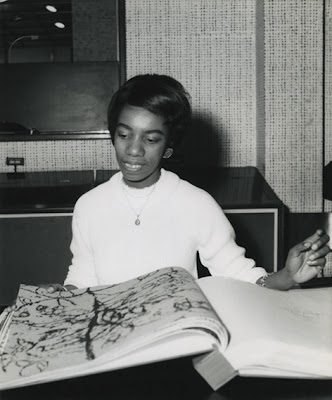 [Althea McNish as seen in the digital companion to Portraits: Women Designers compiled by Leah Armstrong. McNish is pictured looking at her Crystalline design in the black and white colorway, a design for the Wallpaper Manufacturers Ltd (WPM) Palladio 4 range.]
Creative British women with an eye for pattern, specifically mid-century textile designers, have been in the spotlight recently. Case in point: the show Designing Women: Post-War British Textiles, on view right now in London at the Fashion and Textile Museum. Also there's the V & A's new series of books, Modern British Designers, Heal's, Liberty & Co. and Sanderson (both men and women are covered in this boxed set), and in the summer of 2010, Art by the Yard: Women Design Mid-Century Britain took center stage at D.C.'s Textile Museum. 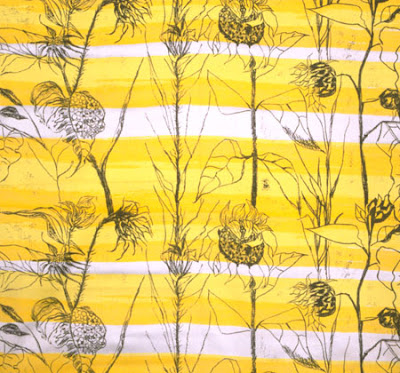 [Image via The Whitworth]
As part of an ongoing celebration of British innovation, today I'm highlighting Althea McNish. Originally from Trinidad and Tobago, McNish came to London in the 50s to study. After graduating from the Royal College of Art, she designed for Liberty and for Heal's and was among the freelancers selected by Hull Traders' avant-garde designer Shirley Craven at the dawn of the revolutionary 60s. Fast forward to the 21st century and McNish's bold, colorful work can be found in the collections of The Whitworth and the V & A. Check out Van Gogh, her 1959 hand screen-printed cotton for Hull Traders. The name lets us know the sunflowers are a nod to the Post-Impressionist, but the combination of stripes with a floral seems, to me at least, to be a modern take on classic English prints.

BTW, Leah Armstrong's Portraits: Women Designers, the source of the photo posted at top, explores the professional identities of 13 individuals, examining how clothes, body language, and environment come together to craft an image.
Posted by Style Court at 3:48 PM

Maureen -- glad you liked it. It's been fun getting better acquainted with some of these British textile designers.