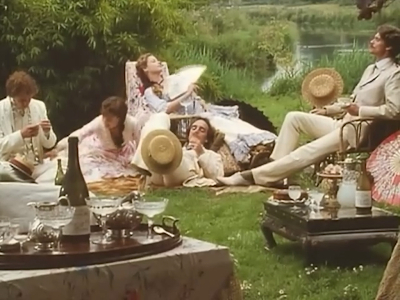 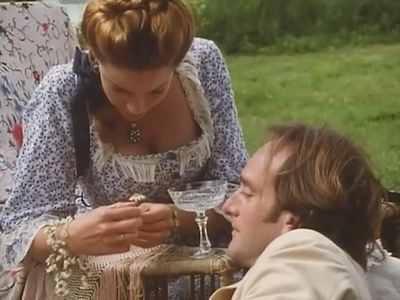 [All screengrabs are from the 1995 BBC production of The Buccaneers. Production design by Tony Burrough; art direction by John Hill and Choi Ho Man; set decoration by Catherine Davis and costume design by Rosalind Ebbutt.]
Visually speaking, there are so many memorable elements in the BBC's mid-1990s production of Edith Wharton's unfinished novel, The Buccaneers. 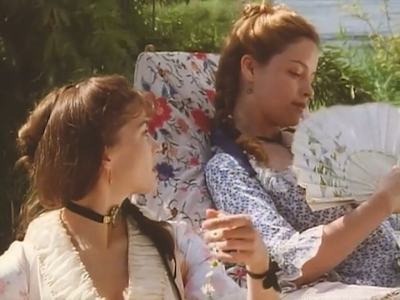 To begin with, we have those staggering back-drops: views of the green English countryside with its grand old houses, including Castle Howard, Stanway House, and Dunluce Castle (that last one is actually in Ireland). And maybe it's just my ever-wandering imagination or simply a case of Gilded Era style dovetailing with 1990s looks, but the black-ribbon chokers worn by the girls and longer, Seattle-grunge-esque hair worn by one of the footmen always take me back. Still, my vote for stand-out scene probably goes to the picnic filmed along the swan-filled River Test at Houghton Lodge. 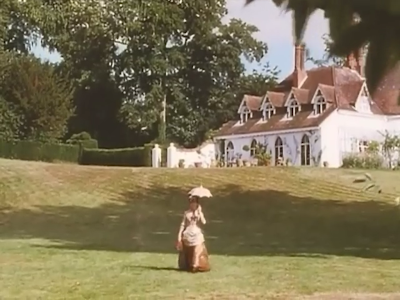 Built in the 18th century, Gothic-inspired Houghton was originally a cottage orné, or 'rustic chic' hideaway -- a let's-get-back-to-nature escape from more formal, stifling digs. Although some of its architectural motifs read Gothic, the place has a decidedly airy feel thanks to long, light-emitting French doors. (I mention this because, in the BBC series, the lodge serves as Runnymede, where Wharton's women temporarily enjoy a bit of freedom.)

As a textile and pattern junkie, I'm naturally drawn to all the layers in The Buccaneers picnic scene but today it's the characters' lazy daisy-chain-making that has inspired a very short (yet somehow meandering), not necessarily miniseries-related walk through art history: 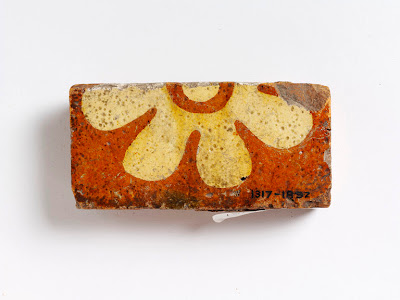 Does this red earthenware tile feel 1960s or 70s to you? I had to take a second look when I noticed it is dated 13th or 14th century. Now part of the V & A's collection, the English-made fragment came from Wimborne Minster in Dorset. 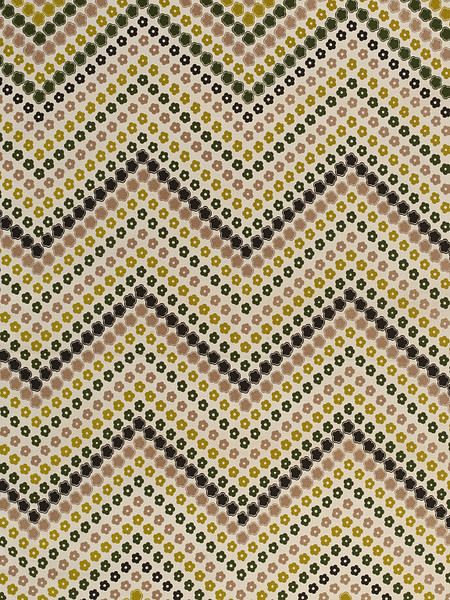 Lucienne Day's Hazy Daisy screen-printed cotton is from the 1970s. I had to include it as a follow up to this post. (Image also via the V & A.) 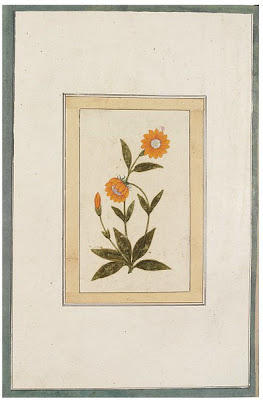 The V & A describes the flowering plant in this Northern Indian, 18th-century miniature watercolor, above, as 'daisy-like.' I love the orange, so I'm going with daisy. 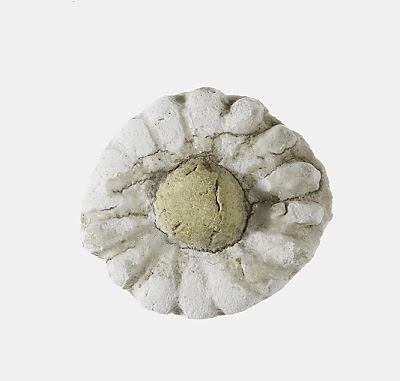 New Kingdom Egyptian faience daisy bead, circa 1390 -1353 BC from The Met's collection. 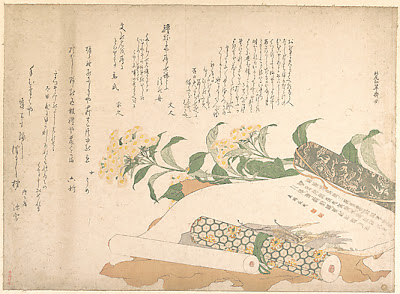 Daisies and Two Makimono by Kitao Shigemasa, a circa 1800 Japanese woodblock print on paper at The Met. 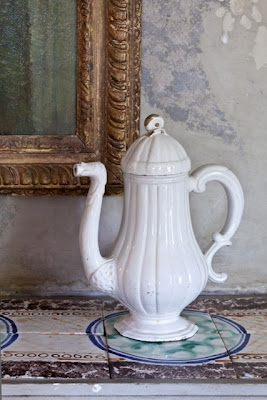 [Image © Charleston Trust; photograph by Penelope Fewster.]
Barely visible in the top right corner, above, a daisy painted on the wall at Charleston. 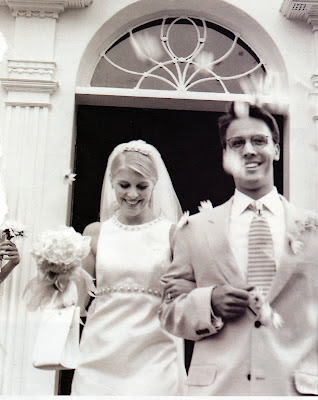 [Photography by Gentl & Hyers as seen in Martha Stewart Weddings circa 1996-97.]
And, okay, not part of the art historical canon but definitely influential in the 1990s and today: a Martha Stewart wedding. Above, daisies -- not confetti, not rose petals -- thrown at editor Page Marchese Norman's daisy-themed, yellow-and-white ceremony.

Back to English castles, this week over at Tumblr I posted a link to a vintage fashion newsreel shot at Highclere (aka Downton Abbey). Just click on the black-and-white 'castle picture.' Regarding Wharton, you may recall that 2012 marks her 150th birthday; click here to learn about a series of related happenings. 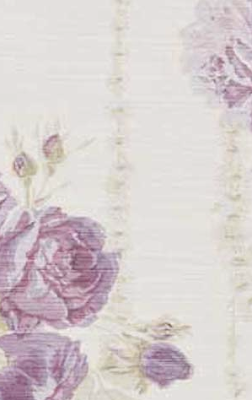 This blog deals with material culture, so with the 150-year Wharton milestone I'd already been planning to look at the production design in film adaptations of her novels. On the literary front, in February and March of this year, there was a lively and lengthy blogosphere conversation about a certain Wharton-related New Yorker essay. Whether prompted by a movie, the essay, the debate, or the birthday, maybe more Wharton books will appear on summer 2012 reading lists.
Posted by Style Court at 6:00 PM

I must say, I love the Hazey Daisy print from the 70's!!! I grew up in the 70's and loved all the wild flower power prints!

Jacqueline -- thank you! Maybe I should try to also link to video of the Buccaneers scene. It's pretty sumptuous.

I love the low table (Chinese black lacquer?) brought out for the picnic.

Yes, black lacquer as far as I can tell. I love it, too. Catherine Davis did such great work with the sets -- really painted a picture of the world Wharton vividly described and critiqued.

With fingers crossed I just looked on netflix to see if they had The Buccaneers and they do and it's on instant watch. I can't wait! I want to be in that picnic scene, sipping tea, cocooned in blue and white calico.

What a fun post! It puts me in a Spring mood.

This image on Google brought me to this page on your fabulous Style Court "Egyptian faience daisy bead" - I love when that happens. And, every post on this page, too! Happy August! ox B