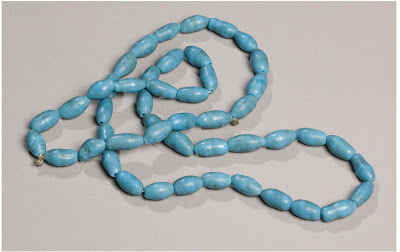 [Egyptian necklace purchased by the South Kensington Museum (now the V&A) in 1872.]
I never need an excuse to focus on British taste and design, but with the Diamond Jubilee and Britain's Cultural Olympiad, 2012 is an especially great year to explore the field. There are many exhibitions, books, and websites delving into UK style past and present. 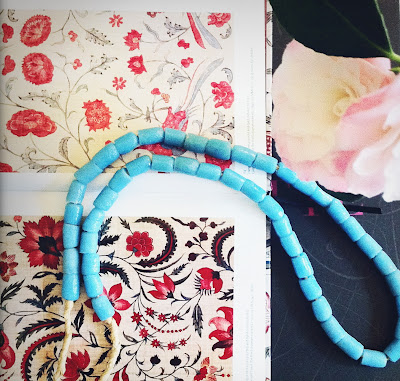 [Photo my own. Contemporary African beads purchased at Ann Mashburn.
The open book is Rosemary Crill's V & A Pattern: Indian Florals. ]
During the last few months we've looked at globally-influenced Victorians and Edwardians, Aesthetes, Bloomsburies, and Modernists (even mentioned Lewis Carroll, too).

And whether I'm reading about the Victorian era or Post-WWII Britain, I keep coming across major festivals, exhibitions, and competitions organized to promote the commercial potential of design. Clearly Empire had a huge impact on 19th century collecting and manufacturing. For the London International Exhibition of 1872, 'peasant jewelery’ was emphasized. The South Kensington Museum (today the V&A) gathered from varied cultures around the globe examples of traditionally crafted pieces. More on the Egyptian glass beads, pictured at the top, here. 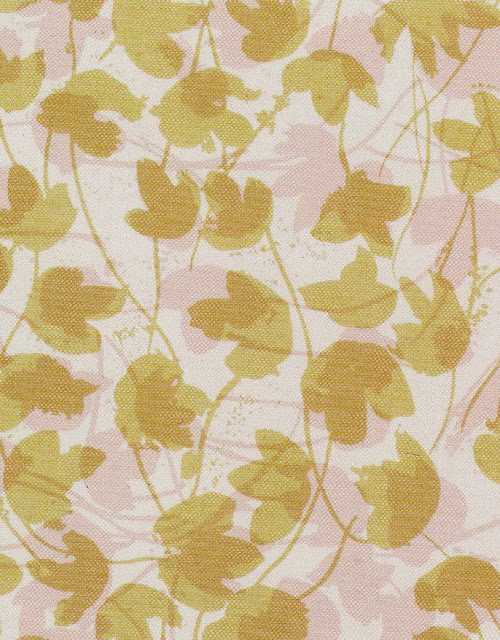 [Trifoliate 1962 by Cliff Holden for The Wall Paper Manufacturers LTD Palladio 5 range
as seen in Award-Winning British Design: 1957-1988.]
By the mid 20th century, there was more of a push to cultivate original British design. The first annual Designs of the Year Awards were launched in 1957 with a mission to find and celebrate the best homegrown products. While the name of the competition changed four times, the contest endured for three decades. Winning wares ranged from cameras to wellies and included furniture, textiles, fitted kitchens, bicycles, and telephones. Just as the V & A collected the 'peasant jewelry' in the 19th century, most of the winning modern designs were acquired by the museum. 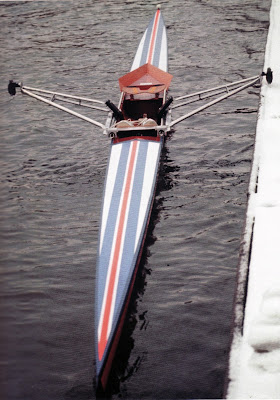 [Image via the V & A.]
Peeking at the V & A gift shop's current offerings, I spied a replica of a 1970 winner, the TRIM phone (TRIM is an acronym for Tone Ringer Illuminated Model), the first phone to ring using a modern electronic warbler instead of a bell. A few other iconic British goods can be seen here, but Crowther's compact edition provides a really comprehensive, well-illustrated survey of the late 20th century.
Posted by Style Court at 3:45 PM

Love this post! My mother has always loved everything British, probably because growing up in the Caribbean, she accompanied my grandma (who was a nurse) to the houses of a few expats that lived in our town. Through them she learned to love the British culture, and she passed it on to me. I grew up talking about The Queen, Charles, Beatrice, et al, as if we knew them...lol. So, I am loving the sample designs you have chosen, and will have to check my library for some of these books. Thanks for this awesomeness!

You should check out the Beaton book on Queen Elizabeth. I'm typing this from my phone, but if you try the Queen E label in the sidebar it should lead you to the link. Or better still just hop over to the V & A! It's right there on the main page -- the exhibition is.

Glad you liked this!